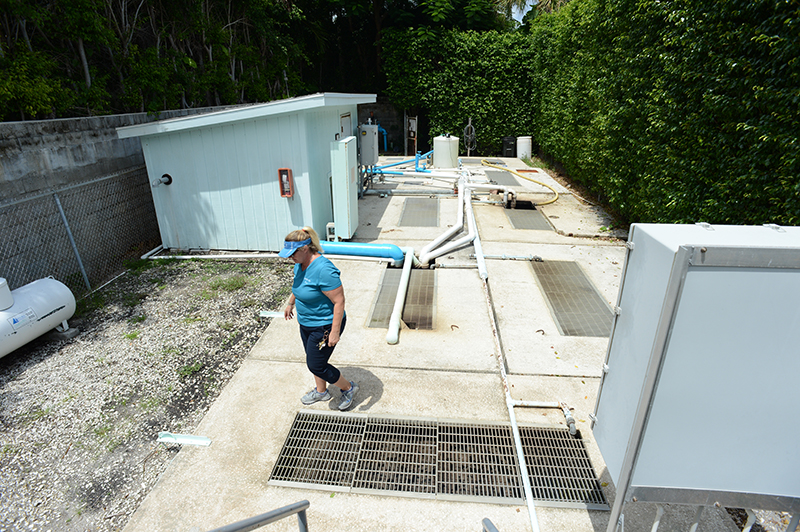 There was an audible gasp in the room when residents attending a meeting of Ocean Ridge’s Septic to Sewer Citizens Advisory Committee last month heard that sewage effluent from one of the more than 14 “package plants” in town was going directly into the Intracoastal Waterway.
What most of those in the room probably didn’t know is that the effluent meets very high state standards and the plant, like all other package plants in town, is closely monitored with testing and reporting required on a regular basis.
Package plants are similar to larger municipal facilities — but on much smaller scale. They are highly regulated, mostly onsite facilities that treat sewage coming from a condominium or multi-unit community.
While there is rarely testing of effluent coming from septic systems in single-family homes, package plants are continuously monitored.
At most plants, systems are checked for nutrient levels — such as nitrogen — and fecal coliform bacteria at least once a month, says Gary Cook, owner of Aqua Data Inc., which services many of the small sewage treatment plants in Ocean Ridge.
Contractors like Aqua Data have certified operators visit the plants either five or six days a week — depending on the requirements from the Florida Department of Health or Florida Department of Environment Protection.
The operators take readings and fill out reports on a regular basis during a visit of 30 minutes or longer.
In the case of the effluent pumped into the Intracoastal, the sewage goes through the standard treatment process and is chlorinated to state standards. It is then treated again with another chemical to remove the chlorine before it is released.
Two of the plants that Cook’s company services put treated water into the Intracoastal, but the majority put the treated effluent into drain fields where it percolates into the ground. One client used deep-well injection.
Deep-well injection of the treated effluent also occurs at the Colonial Crown Manor Disposal Systems Inc. plant, the largest of the package plants in town.
Serving 290 units, the plant treats sewage from three communities — Crown Colony, Colonial Ridge and Ocean Manor. The plant, built in 1969, has a capacity of pumping 100,000 gallons a day and is operated and maintained by U.S. Water Inc.
In peak season it will treat about 65,000 gallons of sewage a day.
The expenses that come with maintaining older plants are passed along to residents as part of monthly fees.
Users of the Colonial Crown Manor package plant pay $45 a month, but Ron Kirn, president of the association that oversees the plant, sees that dropping soon to as low as $30 a month, thanks to changes in key vendors, tighter cost controls and a focus on keeping the plant running smoothly.
“We instituted preventative maintenance on key operational components, which reduces failures,” he said.