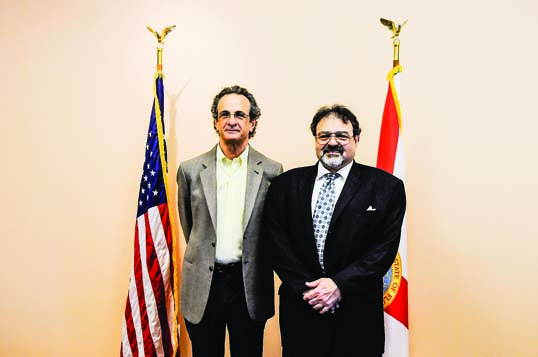 pose moments after being sworn in on March 19.

The Ocean Ridge Town Commission had put off making the hard decisions about access to its public beaches until after the election of two new commissioners in March.
Now that Richard Lucibella and James Bonfiglio have claimed the open commission seats, what to do about beach signs and beachgoers’ behavior goes back on the town’s radar.
Bonfiglio, a 60-year-old real estate lawyer, is no stranger to staff and officials, having played an influential role in Ocean Ridge’s development for more than a decade. He served as the chairman of the town’s Planning and Zoning Commission for the last six years and has held a seat on the panel since 2000.
Bonfiglio worries about liability issues that could rise from increased beach traffic and believes commissioners should consider increasing police presence to deal with it.
“My gut reaction is we probably need to start having a little more police patrolling,” he said. “We might have to hire another officer to control risky behavior, but that would be worth it because it’s like buying an insurance policy to reduce our liability.”
Bonfiglio says he’s open to considering an ordinance banning alcohol consumption on the beach — similar to those in many other South Florida communities — but he’s not inclined to push for it.
“I don’t think there’s anything inherently wrong with alcohol on the beach,” he said. “I think many of our residents enjoy going there and having a drink, and I don’t want to take that away from them.”
Lucibella, 60, a health care management and publishing executive, also is no stranger to the town’s administration. He was a Planning and Zoning board member from 1997 to 2000 and since then has served on the Board of Adjustment.
Lucibella thinks that process matters when it comes to sorting through the complicated issue of managing access to the town’s beaches. He wants the commission to take a thoughtful, calculated approach and steer clear of what could become an emotionally charged debate.
“We have public beaches that will remain public beaches and should remain public beaches,” he said. “But I think we have to look at how to walk the fine line of managing them in a calm planning setting, rather than with acute intervention.”
Lucibella believes this commission is well positioned to set Ocean Ridge on the right course for decades to come. He thinks the commission should resurrect a long-range planning initiative similar to the Focus 2000 effort that guided the town into the new millennium.
“Past commissions have left us in good shape fiscally, with no big, pressing issues,” he says. “That provides us the opportunity to revisit planning and come up with a blueprint to deal with some of the growth problems that are coming.”
In all, 445 turned out for the March 11 election, 30.6 percent of the town’s 1,487 registered voters. Lucibella received 388 votes (49.49 percent), Bonfiglio 296 (37.76 percent) and political newcomer Roberta Wehr 100 (12.76 percent). Commissioners serve three-year terms.
Outgoing Commissioners Zoanne Hennigan and Ed Brookes won praise from Mayor Geoffrey Pugh for their contributions.
“The three years you guys were up here, the biggest contribution for me was the contrarian view you brought,” Pugh told them at the commission’s March meeting. “You made me think about the issue that you were bringing forward. There was such a great transfer of ideas that the decision we made was the best for the town.
“I always thought that the whole time you were up here, that’s all you guys thought about — doing this as a selfless gesture for the town.”