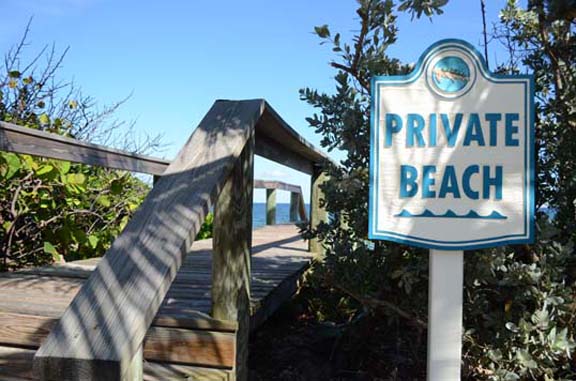 This sign was placed near the Beachway Drive dune cross-over for a few days.

Two signs reading “private beach” have been removed by Ocean Ridge town workers after complaints that they discouraged people from using a public dune walkover to reach the beach near Beachway Drive.

The signs resembled town-erected signs near other crossovers in color, style and size and included the town logo but not the town name.

“The main reason they were removed was because of the location and they made it look like the beach was private,” said Town Manager Ken Schenck.

The manager said he had received “more questions than complaints” about the signs.

One was placed on the south side of the wooden walkover steps leading to the ocean and the other on the north side near the dune.

Schenck said he had been discussing placement of “private beach” signs with nearby residents, but no permits had been issued. He said the issue would be on the town’s Dec. 9 Town Commission agenda.

Ridge Harbour Estates resident Terry Brown said he questioned Schenck about the location of the signs. “Their effect was to suppress the use of the public access when it’s next to the public walkover,” he said.

Although the beach seaward of the mean high water mark is public, the dunes of four lots to the south of the walkover are privately owned. The Tropical Shores Estates Homeowners Association, which owns the four lots, has been discussing with Schenck plans to erect signs to discourage trespassing, said member Linda McIntyre.

She said the association wants to discourage people from sleeping on the beach, discarding drug paraphernalia and crushing the vegetation on their properties.

“The association did not erect the signs, but we are going forward with putting them up to indicate it is private property and discourage people who don’t belong there,” she said of plans to meet further with Schenck over the issue.

Schenck said he has met with other residents in the Beachway neighborhood over the signs, but would not say who had them erected.

Town-placed signs at six other public dune walkovers are labeled as “Public Beach Access” with a list of restrictions. Another at Beachway Road does not indicate public access but lists all the regulations.