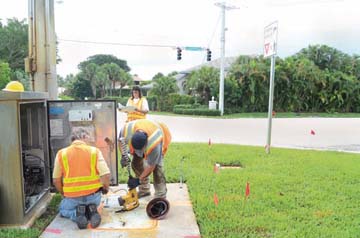 Workers from Traffic Control Devices and The Florida Department of Transportation work on the wiring that controls the stop lights at the intersection of Woolbright Road and A1A on May 28.
Jerry Lower/The Coastal Star

Work on the installation of crosswalks and pedestrian signals at the A1A and Woolbright Road intersection began May 28, over the objection of Beachway Drive neighborhood residents and the Ocean Ridge Town Commission.
The Florida Department of Transportation decided to proceed with construction five days after town commissioners voted 3-1 to oppose the state-funded project.
In a letter to Mayor Geoff Pugh, state road officials cited safety concerns because of increased pedestrian traffic at the intersection, which leads to a beach access point. DOT has jurisdiction over the intersection since A1A is a state road.
“The intersection has experienced three pedestrian-related crashes since 2009, more than any other signalized intersection on A1A between Atlantic Avenue and Lake Avenue,” wrote Mark Plass, DOT district traffic operations engineer.
Pugh said he was disappointed with the DOT’s response, saying that state road officials expressed no safety concerns for the intersection when A1A improvements were made in the area in recent years, including the installation of crosswalks.
Ironically, it was the Town Commission that urged the DOT in 2011 to consider installing crosswalks at the intersection because of safety concerns.  That request led to the project.
The $44,500 project was scheduled to begin April 22, but state road officials agreed to postpone the work until the town held a special meeting May 2. More than 20 nearby residents argued that the crosswalk would disrupt their neighborhood, attract more visitors and pose more danger to pedestrians than leaving it unmarked.
“My gut reaction is you’re funneling people onto a public road, which isn’t safe either,” said nearby resident Penny Kosinski.
Beachway Drive, on the east of the intersection, has no sidewalks and pedestrians headed to the beach must walk in the street.
“We are attempting to put a major league walkway on a T-ball street,” agreed 37-year resident Lisa Allerton.
Pugh and Commissioners Lynn Allison and Gail Adams Aaskov were unhappy with the traffic statistics provided by the DOT and said more in-depth examination was needed.
“This intersection is more dangerous than the intersections north and south of it. We know it’s a dangerous situation. I have to vote for safety,” said Commissioner Ed Brookes, the only commissioner to support the project. Commissioner Zoanne Hennigan was absent.
The DOT has ramped up its efforts in the last three years to protect pedestrians and bicyclists.
“This project definitely will make the intersection safer,” said Jonathan Overton, DOT assistant traffic operations engineer, who attended the meeting.
He said safety concerns are paramount. “How many people have to get hurt or killed before we act?” he asked the commission. “If the signals don’t go in and someone is hurt or killed, then the question will be ‘Why isn’t there one here?’ ”
Former Mayor Ken Kaleel said signs should be erected directing pedestrians and bicyclists to crosswalks north and south of the intersection. “If it’s so dangerous, why possibly would you promote it?” he said.
Overton said that pedestrians would still try to cross at the intersection rather than try to walk four-tenths of a mile to a crosswalk. “It’s not possible to guide and influence human behavior correctly,” he said.
Residents Richard DiPietro and Steve Coz said the crosswalks would create a false sense of security.
The vote against the crosswalks came despite the advice of Police Chief Chris Yannuzzi, who said in a memo that pedestrians would be crossing the Woolbright bridge to reach the beach whether town residents liked it or not and that government was obliged to protect them.
“Regardless of how an individual might feel, the concept of NIMBY (Not In My Back Yard) cannot govern decisions made in this situation. The benefit to the safety of the public at large should be the primary concern,” he read to the commission.
“I am not interested in creating a memorial crosswalk,” he said.
Resident Julia Walker had another perspective: “If there’s anything you can do to curtail the invasion of Beachway, please do so.”
The crosswalks and pedestrian signals will be installed on the north, east and south sides of the intersection. The west side already has a signal. The signals include a countdown clock for pedestrians.