Mayor Geoff Pugh has a plan to create a waterfront promenade and change the traffic flow in Ocean Ridge. And town commissioners say they like what they’ve heard so far.
Pugh’s idea is to make Old Ocean Boulevard a one-way street running south from Corrine Street to Tropical Drive. He proposes making Thompson Street, Adams Road and Beachway Drive dead-ends at Old Ocean.
The mayor sees at least two benefits from the plan: It is likely to funnel more nonresident traffic to Highway A1A and away from neighborhoods; and it would turn Old Ocean Boulevard into a friendly thoroughfare for pedestrians and bicyclists.
“You get the thinking out of the box award,” said Commissioner Richard Lucibella, on hearing Pugh at the Sept. 10 meeting.
“A really exciting beginning,” said Commissioner Lynn Allison.
Commissioner James Bonfiglio said variations of the idea had surfaced in previous years but never advanced.
“I liked it back then,” Bonfiglio said, “and I like it now.”
Police Chief Hal Hutchins said he believes the proposed configuration would allow emergency vehicles adequate access and also work for bicycle traffic. Because the town owns Old Ocean, no approval from state or county officials appears necessary.
“There’s no doubt in my mind we have to do some studies,” Hutchins said, however.
Commissioners instructed Town Manager Ken Schenck to investigate the cost of a traffic engineering study and bring back estimates for this month’s meeting. Pugh says he believes the cost of the plan will be minimal, requiring little more than some signs and plastic barriers to implement.
“If you put all the stuff up and it doesn’t work,” he said, “you just take it down.” 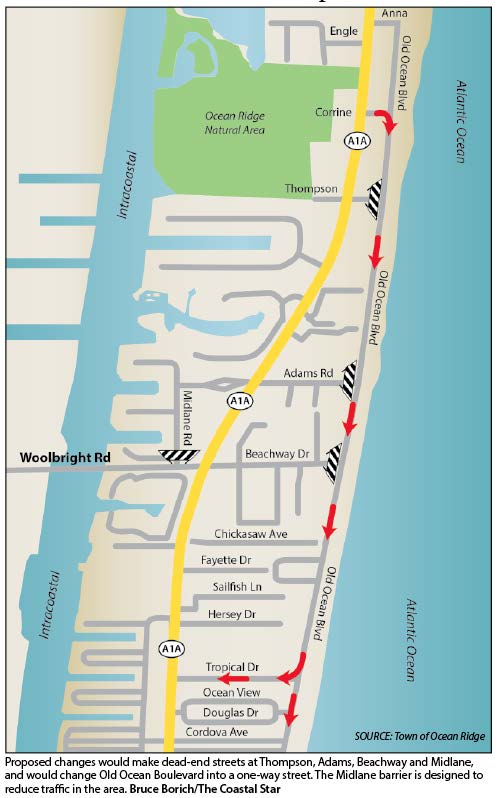 In other business, commissioners unanimously approved paying $82,080 to cover Lucibella’s legal fees in defeating the recall movement against him earlier this year. The town still hopes its insurance carrier will cover the amount above a $50,000 deductible, or about $32,080.
The matter had been tabled twice during previous meetings, at Lucibella’s urging, because Allison was absent. She has been the commission’s most vocal critic of Lucibella’s role in the ouster of former Police Chief Chris Yannuzzi, the event that triggered the recall effort.
“This has been a really upsetting time for this town because of this circumstance,” Allison said. “This has felt very divisive.”
She stood by her assertions that Lucibella’s behavior toward Yannuzzi was “inappropriate and disrespectful” and the recall organizers acted responsibly. She said that, though the court threw out the recall petitions and ruled them legally insufficient, “that doesn’t mean that the substantive issue” was insufficient.
“Both sides had the right to do what they did,” Allison said. “It was extremely unfortunate that it escalated to the point that it did. It certainly could have been resolved in a more peaceful way.”
Lucibella reiterated his criticism of the commission for not defending him earlier. He said he had no choice but to hire an attorney to defend himself and ensure the “sacred election process be honored.” He disagreed with Allison that the recall was legitimate.
“You may only bring a recall action if you can stipulate that someone broke the law,” he said. The organizers’ petition had claimed that Lucibella’s conduct “did not reflect the values of the town,” a claim that the court dismissed as vague and insufficient.
• The commission also rejected a request from developer William Swaim to allow an easement behind Town Hall. “I don’t know why this is even on the agenda,” Pugh said. Swaim has been unable to get permits from state agencies and easements from land owners to access a parcel he wants to develop. Until that happens, Pugh says, the town won’t act.