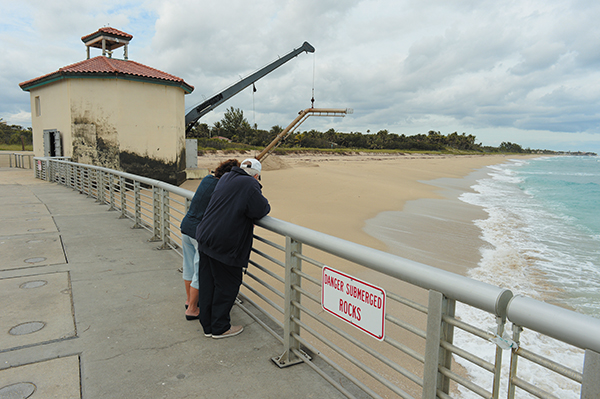 Sand builds up on both sides of the north jetty of the Boynton Inlet after the sand pumping station was temporarily shut down. Seawater usually reaches the wall of the building and boulders are visible under the sign. Jerry Lower/The Coastal Star

No one would have blamed Ocean Ridge residents for thinking something subversive was going on when the sand transfer plant at Boynton Beach Inlet stopped pumping in January.
No one would have blamed them for suspecting that an ongoing dispute between Manalapan and Palm Beach County had something to do with interrupting the flow of sand south to Ocean Ridge’s beaches.
For months, Manalapan officials have voiced their opposition to a county plan to install groins in South Palm Beach. Manalapan fears the groins would steal its sand and damage its beaches.
The town has become so committed to fighting the groins idea that Mayor Keith Waters has hinted Manalapan might not cooperate with the county’s use of the transfer plant to move sand south around the jetty.
Waters’ reasoning is that if the county’s groins take sand meant for Manalapan, then the town can’t afford to give up the sand it has to feed its neighbors’ beaches.
It turned out that the county shut down the plant in January to do some repairs and maintenance, and it was back online in relatively short order. No one blames Ocean Ridge for worrying, however.
In September, a 21-year-old contract — requiring the state, the county, Manalapan and Ocean Ridge to cooperate with the plant’s operation — expired. Manalapan has suggested it might not be willing to sign a new contract, using it as a bargaining chip to persuade the county to scrap its groin plan.
Manalapan Town Manager Linda Stumpf said there have been no talks with the county about renewing the contract, which ended years of legal bickering among the parties. Ocean Ridge Town Attorney Brian Shutt says that, though the contract has lapsed, the agreement’s essence remains.
“I do not see any change in the way the sand station will be operated,” Shutt said, “as there was language in the agreement that provided that upon expiration the county would still continue to operate the station in the same manner.”
Still, Ocean Ridge is taking the plant issue seriously. Town Manager Jamie Titcomb says he expects the Town Commission to choose one of its members at the Feb. 12 meeting to be the “point person” for monitoring the groin project and its potential impact on the transfer plant.