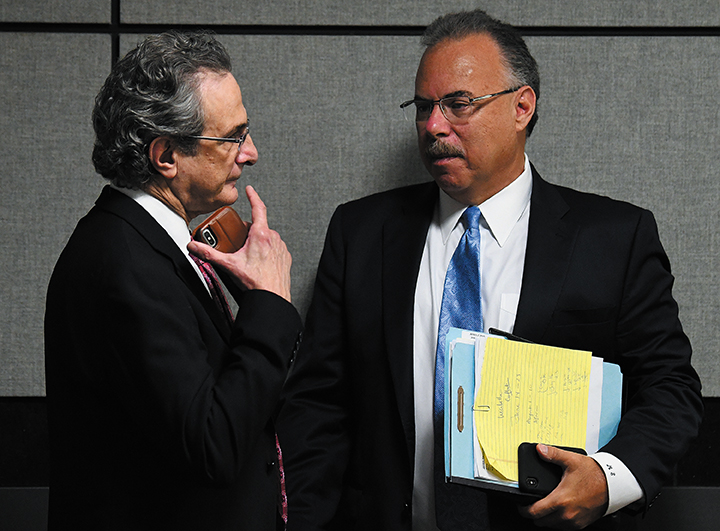 By Dan Moffett and Steve Plunkett

It could be close to the second anniversary of the shooting incident in his backyard before former Ocean Ridge Vice Mayor Richard Lucibella finally gets the day in court he says he’s wanted for so long.
On May 24, Palm Beach County Circuit Judge Meenu Sasser scheduled Lucibella’s felony trial for the week of Aug. 20, adding three months to the delays and postponements that have dogged the case.
Both sides told Sasser that the trial itself is unlikely to move quickly.
Lucibella’s defense attorney, Marc Shiner, said he had a number of witnesses and experts to call, including one from out of state.
Assistant State Attorney Danielle Grundt told the judge the prosecution expects to need extra time to screen jurors. “We expect jury selection to take a little longer than usual because of the media attention on the case,” Grundt said.
Lucibella’s first trial date was set for April 10, 2017, but then was postponed three times before the end of the year after Shiner and Grundt said they needed more time to question dozens of witnesses who may be called to testify. Virtually every official in Ocean Ridge has been included on the potential witness list at one time or another.
In April, Shiner asked Sasser for another delay because of an injury, a torn calf muscle.
Lucibella is facing felony charges of battery on a police officer and resisting an officer with violence — as well as a misdemeanor count of using a firearm while under the influence of alcohol — stemming from the shooting incident at his oceanfront home on Oct. 22, 2016.
Responding to reports of gunshots, police found Lucibella and Ocean Ridge police Lt. Steven Wohlfiel on Lucibella’s patio. Police described the men as “obviously intoxicated” and found a .40-caliber Glock handgun at the scene. Both men denied firing the weapon.
A scuffle broke out between Lucibella and two responding officers, Richard Ermeri and Nubia Plesnik. The town subsequently fired Wohlfiel, and Plesnik sued Lucibella for injuries she said occurred during the altercation. Shiner has accused police of overreacting and using excessive force.
Lucibella, 64, has turned down a plea deal proposal from prosecutors, saying he wanted his “day in court” to clear his name.
Sasser, who this year transferred to the circuit’s criminal division from the civil side, is highly regarded by officers of the court. Last year, for the third year in a row, she received the top number of high marks from the 188 attorneys who participated in the Palm Beach County Bar Association’s evaluation of judges.
After the hearing, Lucibella said he could not predict whether the recent spate of school shootings might color jurors’ perceptions of people who own guns.
“It’s going to come out that it was a police officer that fired the weapon, not me. Does that help or hurt? Who can know?” he said.
“On the other hand, we’ve also seen a huge rise in reported police abuses and overreach,” Lucibella continued. “Will that taint the jury pool? Unknown.”
Despite the uncertainty of going to trial, Lucibella said he believes in the justice system.
“I’m confident, when a jury hears the facts, I’ll not be the party worrying about the future,” he said.