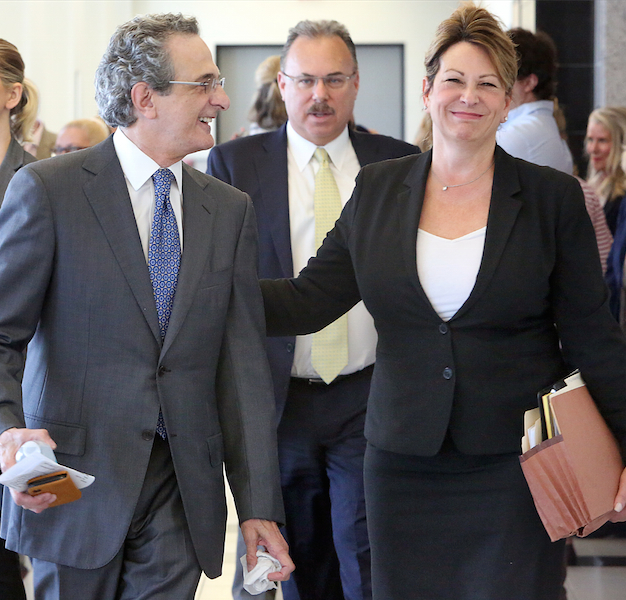 Former Ocean Ridge Vice Mayor Richard Lucibella is all smiles as he leaves the courtroom with his attorneys Heidi Perlet and Marc Shiner after being adjudicated guilty of misdemeanor battery. During sentencing, Circuit Judge Dahlia Weiss ruled that Lucibella must pay only standard court costs of $675. Tim Stepien/Coastal Star

Buoyed by glowing letters of reference from current and former Ocean Ridge mayors, onetime Vice Mayor Richard Lucibella will spend no time behind bars for a 2016 backyard altercation with town police.

Circuit Judge Dahlia Weiss sentenced Lucibella, 65, on Feb. 21 after a jury found him guilty of misdemeanor battery on Police Officer Richard Ermeri but not guilty of two felonies, battery on a law enforcement officer and resisting arrest with violence.

“I am going to adjudicate you guilty of the misdemeanor battery. I'm going to impose standard fines and court costs,” Weiss said.

That translated into $575 in court costs and a $100 prosecution fee. Lucibella paid before leaving the courthouse.

Mayor Steve Coz and former Mayors Jim Bonfiglio, Geoff Pugh and Ken Kaleel all wrote the judge urging her to be lenient.

“I do not know if you are aware that after Hurricane Maria devastated Puerto Rico, Mr. Lucibella personally flew desperately needed supplies to the ravaged citizens of the island at his own cost,” Coz wrote. “Do not punish Mr. Lucibella further for what can only be described as a night of blunders, not crimes.”

Kaleel said in his letter of support, “Simply put, Rich is a wonderful, kind and good hearted person. He is deserving of your mercy.”

Defense attorney Marc Shiner, who had said earlier his client “will keep fighting to clear his name,” filed a motion seeking a new trial, saying Ermeri “was unlawfully on Lucibella’s property and was giving him unlawful orders.” He had argued that position several times earlier in the five-day trial.

Weiss did not rule on the request.

Assistant State Attorney Danielle Grundt said Lucibella "has never been in trouble before" and that probation would serve no purpose.

Lucibella and Shiner both said they were “very pleased” with the Feb. 1 verdict.

“The jury spoke loudly, loud and clear, that he did not commit a felony,” Shiner said.

Though simple battery can be punished by up to one year in jail and a $1,000 fine, typically an offender is sentenced to a diversion program and put on probation, Shiner had said. Each felony charge carried a potential sentence of five years in prison.

Not having a felony conviction on his record allows Lucibella to get his license back for a federal firearms dealership and a concealed weapons permit and also lets him run for public office again, Shiner said.

Lucibella had told the judge he did not want jurors to be able to convict him of a lesser charge, but prosecutors asked that conviction of simple battery be an option. The six jurors, all men, spent about four hours deliberating.

The charges stemmed from a confrontation in Lucibella’s beachfront backyard on Oct. 22, 2016. Town police went to his home after getting calls to 911 about “shots fired.” Officers confiscated a .40-caliber handgun and found five spent shell casings on the patio.

An ensuing scuffle left Lucibella handcuffed on the ground with fractured ribs and a cut over his eye. Ermeri and Officer Nubia Plesnik both complained of aches and pain afterward and went to an urgent care clinic.

Ermeri testified that Lucibella poked him in the chest during the investigation, “a forceful poke — like that,” he said, thumping his police body armor with a finger three or four times.