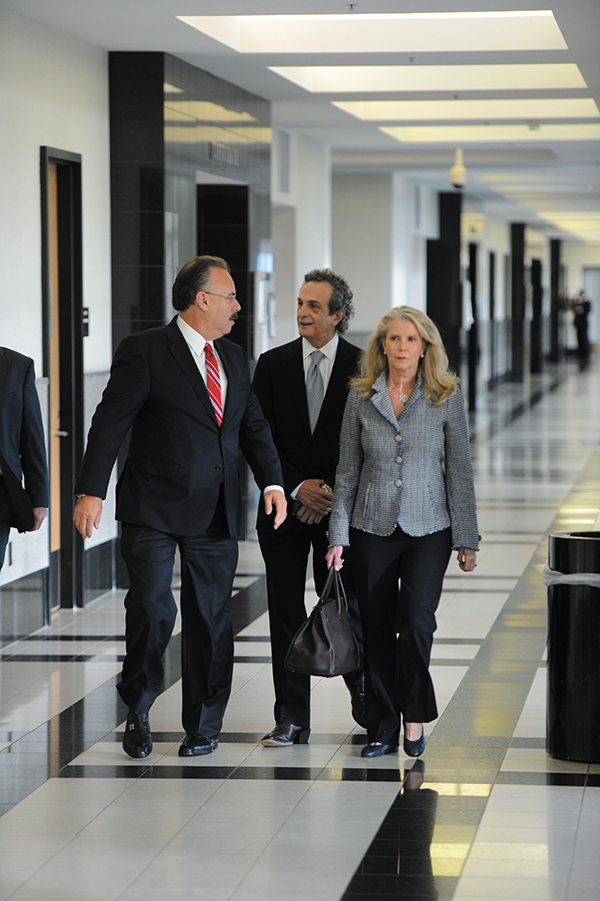 A jury will decide whether former Vice Mayor Richard Lucibella is guilty of felony battery on an Ocean Ridge police officer and resisting the officer with violence.
Circuit Judge Charles Burton scheduled the trial to begin at 9:30 a.m. April 10. Lucibella also faces a misdemeanor count of using a firearm while under the influence of alcohol. He has pleaded not guilty to all charges.
“You’ll see this case develop into a lot more,” Lucibella’s attorney, Marc Shiner, said after a Jan. 10 hearing. “There’s a lot of interesting small-town politics in this.”

Town police arrived at Lucibella’s oceanfront home Oct. 22 after neighbors complained of hearing gunshots. Officers said they found the vice mayor and one of their supervisors, Lt. Steven Wohlfiel, “obviously intoxicated” on the patio. Officers say they confiscated a .40-caliber Glock handgun and found five spent shell casings on the patio. Police also took a semiautomatic pistol they said Lucibella had in his back pocket.
According to police reports, when officers Richard Ermeri and Nubia Plesnik tried to block Lucibella, 63, from entering his house, he resisted. The officers wrestled him to the paver-covered ground and handcuffed him. Lucibella needed treatment for facial injuries, and Ermeri and Plesnik also required medical attention, according to the reports.
Through Shiner, Lucibella has claimed that he is the victim of police overreaction. He maintains officers should not have entered his back yard in the first place, and then that they used excessive force, cracking three of his ribs. Lucibella said outside the courtroom that he has not fully recovered.
“They’re healing,” he said of the ribs.
Lucibella resigned his position as vice mayor and town commissioner Dec. 7, the same day the State Attorney’s Office filed formal charges against him.
Wohlfiel was put on administrative duty after the incident and fired Jan. 4 after an internal affairs report concluded the Glock was his personal weapon, not Lucibella’s, and that two witnesses said Wohlfiel admitted he was the one who shot it. He is appealing his dismissal to the Town Commission.
Shiner said the internal affairs report undercuts the charge that Lucibella fired the weapon and shows that Ermeri and Plesnik recognized the Glock as belonging to Wohlfiel. “They knew right away,” Shiner said.
“For some reason,” he said, Town Manager Jamie Titcomb was called to the police station. Titcomb and Lucibella had publicly skirmished over the town budget just one month before, Shiner said.
And Wohlfiel was not the only off-duty officer drinking that Saturday night, he said. “The chief was intoxicated,” Shiner said. “It’s all left out of the report.”
Chief Hal Hutchins said earlier his wife drove him to police headquarters that night because he had some wine with dinner.
Shiner also said Plesnik’s lawyer learned Lucibella has a $10 million insurance policy and notified him that Plesnik plans to sue for neck injuries. In her report, Plesnik said she went to an urgent care center afterward to have her left shoulder, arm, wrist, leg and foot examined but did not mention having any neck pain.
Shiner said in-house video at the Police Department captures Plesnik cautioning Ermeri to watch his temper. “You’re on tape,” he said the video shows her reminding Ermeri, though Shiner pointed out the audio is hard to hear.