Built in 1924 and remodeled in 1988 and 2001, this Mizner-style beach house was one of the first homes built in Ocean Ridge. 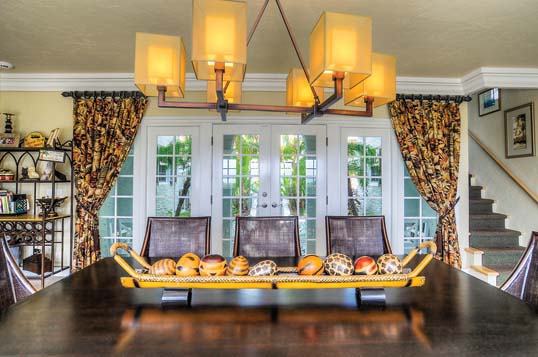 The dining room is centrally located for access from both residential wings of this 2,700-square-foot home. 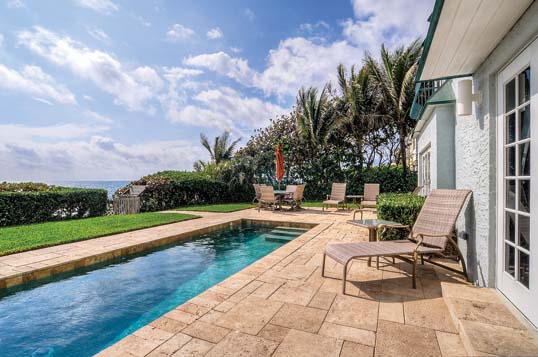 A lap pool is nestled between the house and the ocean. 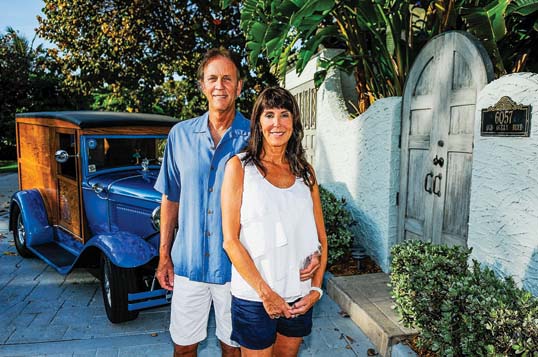 Owners Pete Schofield and Maggie Miley, posing outside the front gate with a vintage truck, are planning to move

to another house in Ocean Ridge.

Inset below: The sign on the gate identifies Pete’s favorite pastime.

The historic and photogenic beach home where Maggie Miley and her husband, Pete Schofield, reside is one of the oldest houses in Ocean Ridge and has been in Miley’s family since 1987. That was when her grandparents, Curt and Martha Joa, who lived in the house next door, bought it from the estate of the original owners.
For the first time in its 90-year history, the home at 6057 Old Ocean Blvd. is up for public sale as Miley and Schofield prepare to move to new digs elsewhere in Ocean Ridge.
Miley bought the property after her grandparents died within two months of each other in the late 1990s. The Joas, long-time Ocean Ridge residents and avid golfers, also had homes in Germany and Wisconsin. They owned a company in Sheboygan Falls, Wis., that makes machinery to make baby diapers and other disposable paper items.
But the original owners of 6057 Old Ocean Blvd. were Ocean Ridge pioneers — two sets of brothers who were world-renowned conchologists and known to be a tad eccentric. They drove old cars, never had an air conditioner and two of them spent much of their time collecting shells or using the ham radio.
When the last two brothers died, they left no heirs, leaving their legal representatives to find a home for their shells and their financial treasure — in excess of $1 million.
The two sets of brothers — Dunbars and McGintys — were from Michigan and their families made their money in the construction business. When the house was built in 1924, Ocean Ridge had yet to incorporate. That didn’t happen until 1931. 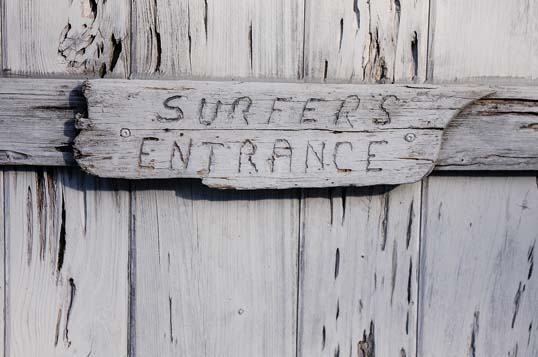 The two-story house was set up like a duplex, Miley said, with kitchens and bathrooms at opposite ends of the house and some common areas, such as the dining room in between. You had to walk outside on a second floor walkway to get into the bedrooms, she said.
The design had its perks. The calming sounds of waves rolling ashore could be heard from every room. French doors opened to the east to allow sea breezes to drift through and cool the dining room. Dade County pine floors held up well and the pecky cypress garage doors added to the aesthetics.
On the other hand, summertime sleeping in the upstairs bedrooms was a sticky proposition, even with the windows open, since there was no air conditioner.
Edward and Pomroy Dunbar lived in one side of the house, while their twin cousins, Thomas and Paul McGinty made their home in the other.
Edward Dunbar, an Ocean Ridge commissioner and municipal court judge, died in 1942. His brother, Pomroy, was the town’s first clerk and served as a commissioner for many years and was town manager.
When Pomroy Dunbar and his wife died, the McGinty twins, who were single, inherited their cousin’s portion of the house.
Miley said her family called the McGintys “the scientists.” The two were known for their beautiful tropical gardens and for their passion for shell collecting. In fact, after Tom McGinty died (his brother died seven months earlier), their million-dollar shell collection was donated to various museums, including the Florida State Museum in Gainesville, Florida Atlantic University, Loxahatchee Historical Society, Morikami Museum and the Palm Glades Girl Scouts Council.
A mollusk expert from the Smithsonian told the McGintys’ legal representatives that the collection was “the finest ever for Florida specimens.” Besides the shells, the brothers left behind more than $1 million. Eleven nonprofit organizations benefited from the will.
The Joas were approached about buying the Dunbar/McGinty estate after the brothers died.
“My grandmother said the gardens alone, with every tropical plant imaginable, were worth it,” Miley said. The house itself was in need of a massive renovation.
Miley, an interior designer, was charged with the 1988 redo and worked with local architect George Davis.
The renovation was extensive. “Only the stucco and the slab remained,” Miley said. It took more than a year to complete.       “My grandmother wanted it to have a more French look, so we changed the barrel (roof) tiles for a chateau type,” Miley said. “Then in 2005, I went back to barrel. The house really has its own style. The way the stucco was applied is certainly identifiable from the 1920s. The Unger home on Coconut Lane has the same stucco.”
During the 1988 renovation, the upstairs walkway was enclosed, so people no longer had to go outside to get into the bedrooms. And Martha Joa recruited French stained-glass artist Jean Barillet to install special windows in the courtyard and the four garage door panels.  She was familiar with Barillet’s work at St. Vincent de Paul Regional Seminary in Boynton Beach and also hired him to do the windows in the family’s chapel in Plymouth, Wis.
The Joas didn’t add air conditoning right away, but soon reconsidered. It was, they determined, uncomfortably hot without it for those who bunked upstairs.
Miley undertook another redesign when she bought the property in 2001. She hired Ocean Ridge architects Digby Bridges and Mark Marsh to design a 1,000-square-foot addition to the south side of the house. That gave her some spaces she had always wanted — including a roomy master bedroom with a walk-in closet and a large bathroom with a Roman tub, plus a family room.
Miley, who also has a home in Atlanta, said she has fond memories of her many visits to Ocean Ridge as a child.
“I remember when we would get off the plane and drive down A1A to the house (there was no I-95 then). I would pick up this scent all the way — a jungle smell, musty, moldy, flowery. It was here until the late 1970s,” she said.
“The other thing I remember was the amount of blue crabs on A1A and Old Ocean. When we would cross Old Ocean from the guest house to the main house it was always a challenge not to step on a dead one or get chased by one — and they were large back then!”
As Miley and Schofield (and their frisky pair of Westies) prepare to move, the historic Ocean Ridge home is on the market. The 2,700-square-foot house, with three bedrooms, three bathrooms, two single-car garages and a sparkling lap pool, is listed with Steve Presson of The Corcoran Group for $3.95 million.