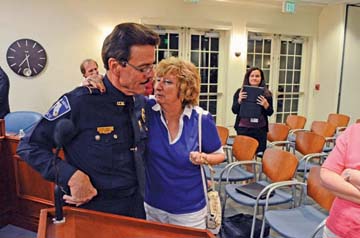 The simmering feud over beach security between Ocean Ridge Town Commissioner Richard Lucibella and Police Chief Chris Yannuzzi came to a full boil in January.
By the time passions cooled, the dispute had burned both men. The chief was out of a job, and the commissioner was facing a recall effort launched by the chief’s supporters.
Yannuzzi agreed to resign after three commissioners voted to pursue his termination if he didn’t. A standing-room-only audience packed Town Hall on Jan. 15 as the commission approved the terms of Yannuzzi’s resignation, and the chief thanked dozens of well-wishers for speaking in his defense.
“It is greatly appreciated, beyond belief,” he told his supporters. “Did I make a mistake? Yes, I did.”
Yannuzzi conceded that he misinterpreted the law governing recovered stolen property when he investigated how a Broward County woman’s credit card turned up on the deck of Lucibella’s oceanfront home in November. Because the credit card was found on private property, Lucibella had no obligation to turn it over to local police. Yet, during a phone conversation, the chief insisted that Lucibella give him the card.
Perhaps Yannuzzi’s costlier mistake was recording the eight-minute call without Lucibella’s knowledge. A furious commissioner threatened to go after the chief’s job because of his harassment.
“Found property on my property is mine,” Lucibella said.
“You want to play this will battle? I’ll tell you what, Monday, the first week of the month, I’m going to make a motion that we let you go, that we separate. I don’t think I have a second. I probably don’t have three votes. But I only have to win once, chief. I’ll make that motion every single month.”
Lucibella’s anger grew after learning that the chief had taken the recording to the State Attorney’s Office, the Inspector General’s Office and the Palm Beach County Commission on Ethics. Lucibella described Yannuzzi’s behavior as a “combination of J. Edgar Hoover and Barney Fife,” and pushed for his termination.
Florida statute allows law enforcement officers to record telephone conversations when “the purpose of such interception is to obtain evidence of a criminal act.”
Yannuzzi said he believed recording was necessary because the case involved theft and stolen property, though he concedes he did not recognize the legal importance of the card turning up on private land. Commissioner Richard Lucibella has been publicly critical of the police chief for several months.

Lucibella and his supporters said recording the call was overkill, unwarranted and an attempt to undermine a town commissioner.
Commissioner James Bonfiglio described the matter as “a created crime by the police chief” and accused Yannuzzi of breaching the separation of powers between the commission and Police Department.
Town Manager Ken Schenck agreed, and recommended the chief’s firing to the commission.  He also faulted Yannuzzi for low morale within the department, though Schenck had given the chief only one written evaluation since he took over in 2010 — and that rated his performance “outstanding.”
Yannuzzi, 58, joined the Ocean Ridge department in 2006. As chief, he has been instrumental in several multi-agency police efforts, including a project to implement license tag cameras on the barrier island.
“Over the past few weeks there has developed a contentious situation between the police chief and one of the commissioners. This has escalated so that it is creating problems in the daily duties,” Schenck wrote to commissioners in recommending termination. “Unfortunately, I don’t see the conflict ending and I’m not sure where it’s headed. It is not a good situation for the workplace.”
Vice Mayor Lynn Allison and Commissioner Gail Adams Aaskov sided with the chief and voted against termination; Mayor Geoff Pugh and Bonfiglio agreed with Lucibella. And Yannuzzi’s fate was sealed.
“I think it was justified for the manager to take the action that he did,” Pugh said, and called the chief’s behavior in the Lucibella matter “egregious.”
Lucibella said he did a Google search to locate the woman who owned the card and reported the matter to the Davie Police Department. The commissioner said he learned the Visa card was stolen at a Costco in Broward and deactivated by the owner, who instructed Lucibella to cut up the card. He said he did.

Ocean Ridge Police Chief, Chris Yannuzzi, gestures toward Commissioner Richard Lucibella and Town Manager Ken Schenck while addressing a crowd at the special commission meeting at which his resignation was accepted. Schenck had recommended his termination earlier in the week. Photos by Jerry Lower/The Coastal Star

Conflict follows beach feud
Yannuzzi and Lucibella have carried on a long-running feud over how the town should police its beaches, with the commissioner accusing the chief of not doing enough to enforce the law and stop trespassers — presumably like whoever left the card on his deck.
“It’s no secret that I’ve been a critic of Chief Yannuzzi,” he said. “But I bear him no ill will.”
Lucibella said he was “proud” of his stand during the phone call, and the chief was wrong to make a “clandestine recording.” He said Yannuzzi had all he needed the first two minutes of the conversation and was trying to bait him.
Under terms of the separation agreement the commission unanimously approved, the town will pay Yannuzzi about $82,000. The chief left office Jan. 16, but his resignation will take effect on March 1. He will receive $10,400 in severance pay and another $43,800 to do consulting work for the town as a civilian for the next five months. Yannuzzi will get about $28,000 more in vacation and unused sick pay.
As part of the deal, Schenck will put a “positive evaluation” in his file. Both sides are to refrain from disparaging comments, and more important, Yannuzzi agreed not to file suit against the town. However, the courtroom door was left open for Lucibella and Yannuzzi to take legal action against each other, or for Lucibella to act against the town.
Town Attorney Ken Spillias said the settlement agreement excludes Lucibella from giving up his right to sue, as the commissioner requested.
“There have been so many inaccuracies, misstatements and out-and-out lies that I don’t have the time, the ability or the desire to address them all,” Yannuzzi told the commission in accepting the deal. “I can tell you that on the day of this incident I was dealing with a citizen, not a commissioner.”
Though the commission’s vote for the settlement package was unanimous, Allison and Aaskov still opposed the chief’s termination. Aaskov called the dispute “an embarrassment to the town,” and Allison wondered why Schenck’s complaints about Yannuzzi’s performance had surfaced all at once.
“I still don’t understand — why not a reprimand or a grievance?” Allison said of the decision to remove the chief. “Why we went from zero to termination, I don’t understand.”
Nan Yablong, who circulated a petition to recall Lucibella, said dozens of residents had signed: “We’ll get all the signatures we need.”
The commission unanimously approved Lt. Hal Hutchins as acting police chief until Yannuzzi’s resignation takes effect in March. Hutchins will become interim chief then, and he says he’s interested in keeping the job permanently. Commissioners said they will consider him, but also plan to conduct an outside search.