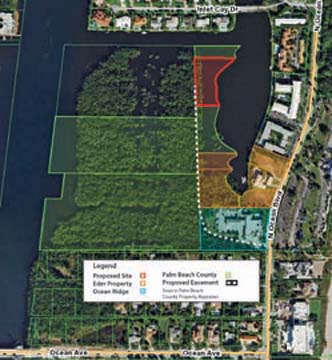 Developer William Swaim wants Ocean Ridge to create an access road to property he wants to buy in the mangrove-filled lagoon behind Town Hall.
Residents along the quarter-mile stretch of Intracoastal waterfront are for the most part horrified, fearing the road could lead to development that ruins their pristine harbor.
“We’re against this because of the environmental destruction it would cause,” says Nadine Magee, who lives in the Wellington Arms condominium. “He has to be stopped. The more opposition, the better.”
Jeff Eder, who owns a house and two lots on North Ocean Boulevard north of Town Hall, felt so strongly about preventing development that he paid $20,000 last year to buy a mangrove-rich parcel in the lagoon, hoping to  block the path of Swaim’s road.
“From a business perspective, it’s genius if you can do it,” Eder says of Swaim’s plan. “You take a piece of waterfront property and connect it to the outside world. The damage it does to a natural wetland is something else.”
Even Swaim’s staunchest opponents, however, allow that his chances of actually building anything in the lagoon are remote. Going forward would require getting permits from a long list of federal, state and local agencies that have a long history of protecting mangroves at all costs.
“I’m not trying to pull any tricks or anything,” Swaim says. “Nothing will be done without permits, and anything that needs to be complied with will be complied with. I’m just trying to follow the process.”
For the last year, his plan for the access road has been stuck at the South Florida Water Management District. His argument to the SFWMD is that he deserves an exemption because the mangroves don’t belong in the lagoon. The area was originally a freshwater marsh, he says, and the mangroves only started growing there decades ago after the Army Corps of Engineers cleared out the area for mosquito control.
“There’s really not that much mangrove impact,” says Swaim, who says he only wants to develop one single-family home on one lot. “The area behind city hall is actually classified as a ‘dead muck zone’ by the county.”
The SFWMD has countered by arguing that the area has always been a natural wetland, worthy of protection, whether there were mangroves or not. And the mangroves grew in on their own, and they’re there now.
Ultimately, an administrative law judge in Tallahassee will have to decide which opinion prevails — likely sometime later this year. Ocean Ridge town commissioners have been withholding their opinions until Swaim and the SFWMD come to some sort of resolution.
The commissioners got their first look at Swaim’s plan in May 2014 when he reminded them about the 50-foot public road and utility easement that was never vacated when the new Town Hall was constructed.
Town Attorney Ken Spillias said that access to the properties behind the building has been a looming issue since the $4 million Town Hall was completed in 2008.
Swaim proposed that the town grant a 15-foot public easement on the south property line along the existing 15-foot alley, and also a 30-foot easement running the entire western boundary of the property.
Swaim told the commission he had a contract to buy two parcels located west and north of Town Hall and needed the access so he could apply for permits.
Commissioners unanimously approved a motion last May that ordered town staff to research the implications of Swaim’s plan. The town has been waiting to hear how he fares with the SFWMD ever since.
Swaim formed Waterfront ICW Properties last year as a Boynton Beach-based limited liability corporation. But his history with tree disputes goes back much further. In 1992, the city of Delray Beach fined him $7,500 for moving banyan trees without a permit while developing a north-end waterfront project. In 1991, Palm Beach County officials fined him for removing mangroves from another Delray Beach site.
Eder, an orthodontist, admits that the chances of Swaim developing the lagoon are remote.
“I honestly really don’t believe it can get off the ground,” Eder says. “His hope is that some judge that doesn’t know any better gives him an exemption. If that happens, then all bets are off.”