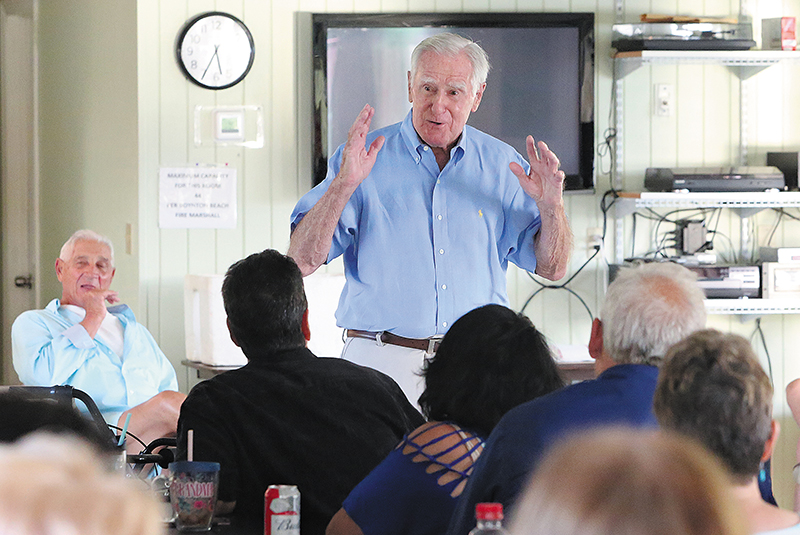 Layton had three more ‘Jive At Five’ sessions planned this season when the president of the homeowners association called him March 16 to say all events had been canceled in light of the coronavirus threat. ‘They’ve locked both clubhouses,’ Layton says. ‘The only good news in this is, I won’t have to work as hard getting ready for next year. I’m almost halfway there.’
Tim Stepien/The Coastal Star

Bob Layton has an intriguing theory about popular music.

“I’ve heard,” he says, “that the music you were hearing when you were 14 years old affects your musical taste for the rest of your life.”

For him, that was 1943, when The Mills Brothers’ Paper Doll was the year’s biggest hit.

Layton was born on July 14, 1929, the year of Tip Toe Thru The Tulips. He’s 90 now, with a long life of singers and songs between his ears and in his heart.

For the past 20 of those 90 years, he’s shared those singers and their songs with his neighbors at the Crown Colony Club in Ocean Ridge.

On Tuesday evenings during the season, men and women in their 70s, 80s or 90s gather to hear him play the old recordings that make them feel 14 again, and learn a few bits of biography and musical trivia along the way.

By 4:45 p.m. on the last Tuesday in February, they’re wandering in to the community’s clubhouse, water bottles, beers, Cokes and Chex Mix in hand, greeting, gossiping and settling down along the bingo tables.

By 5 p.m., there are definitely 44 people waiting. Salvatore Renna is in the kitchen, boiling the hot dogs, getting the wine and beer set up for later. Layton is at his table up front, and his sound man, Dom Pillaria, is at the tape deck nearby.

Yes, he has strong musical opinions.

“Nineteen-eighty is my cutoff point,” he will tell you, lip threatening to curl. “That’s when the amateurs took over.”

“I was born in New Jersey and went to Asbury Park High School, but I don’t get him at all,” Layton says. “I tried. What’s his problem?”

And that one hit, of course, is Send In The Clowns. But Layton favors the Sinatra version, not Judy Collins’ big hit.

Layton and his neighbor, Thomasina Cole, have a friendly dispute regarding Barbra Streisand.

“She’s not on my list,” Layton says, making the thumbs-down sign. “She’s got a whiny voice that’s irritating to me.”

Cole considers the Streisand tone. “Maybe it’s something to do with her nose. …”

A retired ad executive from Newtown Square, Pennsylvania, Layton had about 2,000 LPs in the attic five years ago when he and Irene, his wife of 65 years, decided to live in Ocean Ridge full time.

“I sold a few, but most of them went to Goodwill,” he says, “and I can tell you, they’re really heavy.”

Anything worth keeping he put on tape. Now he has 15 shoe boxes full of cassettes from which to choose and mix his weekly listening sessions.

“This gives me something to do in the summertime,” he explains. “I get an idea while I’m shaving, so I get a pad and make a list of what I have.” 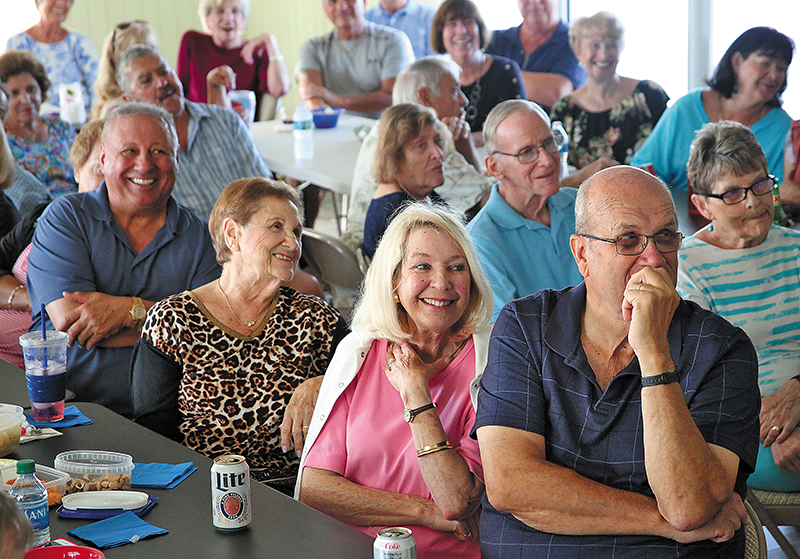 Crown Colony residents smile as they to listen to Bob Layton talk about music history.

During each Jive At Five, Layton will introduce and comment on about 15 songs. Every session has a theme, drawn from three categories — an artist, composer or subject.

He’s done “Songs With Love In The Title,” “How World War II Changed American Popular Music,” and even “Music With Sexually Suggestive Lyrics.”

But that’s sexually suggestive lyrics from before 1980, you understand, so you get All Of Me (Why Not Take All Of Me?).

Tonight’s theme is “Fifteen Italian Singers Take Over American Pop,” and Layton has come up with a clever way of introducing them.

“Vito Rocco Farinola,” he announces, to puzzled frowns. The audience knows him as Vic Damone. Layton tells them of the time young Farinola cornered Perry Como in an elevator, asked to sing for him, and won a few words of encouragement.

Then he plays You’re Breaking My Heart, Damone’s 1949 hit.

Did you know the melody was based on an older Italian song called Mattinata?

Pierino Ronald Como was an easy guess, and they hear Perry Como’s Prisoner of Love.

Jasper Cini? They know him as Al Martino of Spanish Eyes fame.

“Next, a record where Dean Martin seems to be sober,” Layton jokes, and Memories Are Made Of This.

John Katsaros, 96, is tapping his cane, bobbing his World War II Purple Heart cap and grinning. Shot down over Frankfurt on March 20, 1944, he bears a shrapnel scar still visible on his right forearm.

“I love this,” he says. “I been coming here since they started it. You know, I saw Glenn Miller in Haverhill, Mass., before he became popular. Yeah.”

He knows his audience, and so of course they hear Mack The Knife.

The story goes that Darin chose his last name when he glanced out a hotel room window and saw a neon sign for a Chinese restaurant called Mandarin, with the first three letters dark.

“But that may be apocryphal,” Layton concedes.
By now, much of the audience has stopped resisting the urge to sing along.

Everyone knows Anthony Dominick Benedetto, of course. But did you know that in 1957 the great songwriter Johnny Mercer got a letter from a grandmother in Youngstown, Ohio, enclosing what she felt sure would be a great line for a song?

Mercer agreed and wrote I Wanna Be Around — “to pick up the pieces when somebody breaks your heart.”

Tony Bennett got a big hit out of it, and Sadie Vimmerstedt got a third of the royalties.

And now, the finale.

Do we really need to tell you his name?

Jacques Revaux wrote the melody, Paul Anka wrote the English lyrics, and he sang it his way.

Sally Valenti, 93, leans over to her neighbor.

Bennett, Como, Damone — they’re all fine. But this is a Sinatra crowd, so Layton announces that Frank has agreed to do an encore.
New York, New York.

And suddenly they’re all on their feet, swaying from side to side and singing along, clapping for Frank, for New York, for the songs that were young when they were young, and for Bob Layton.