Ocean Ridge voters elected Steve Coz to another term on the Town Commission during the March 12 municipal election, and they chose Susan Hurlburt over John Lipscomb to fill an open seat with a partial one-year term.

During the campaign, Coz pointed to his record of service to the town over the past decade as reason for voters to support him. Before serving the last three years as commissioner, he was a member of the town’s Planning and Zoning Commission and its Board of Adjustment.

“There’s one reason that all three of them gave for endorsing me: experience,” Coz said.

During a candidates forum in February, Coz said he believed the most pressing issue for the commission is deciding on a permanent replacement for Town Manager Jamie Titcomb, who resigned last month to take a similar position in Loxahatchee Groves. Town Clerk Tracey Stevens is replacing Titcomb on an interim basis for six months. 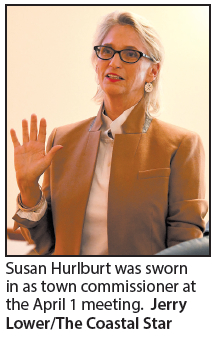 Hurlburt, a political newcomer, brought to the race credentials in art museum administration and historic preservation. She served 12 years on the Beach Property Owners Association in Delray Beach before moving to Ocean Ridge five years ago.

Hurlburt said she ran “the lowest-key campaign ever” and speculated that her record as an advocate and volunteer might have made the difference in defeating Lipscomb.

“I bring in a lot of community interaction and civic services,” Hurlburt said. “I like working in government. I’m not a big fan of politics but I do like government.”

At the April 1 meeting, on a 3-2 vote, the commission selected Coz to serve another one-year term as mayor.

Phil Besler and Hurlburt joined Coz in voting for his appointment. Don MaGruder and Kristine de Haseth voted for MaGruder.

The commission gave MaGruder another term as vice mayor on a 4-1 vote, with Hurlburt voting for de HasethÚ