2021: In the past 35 years, dune vegetation accumulated enough sand to bury the sea wall separating the Ocean Club of Florida from the beach, leading to this unfinished Ocean Club pool replacement project. The town approved the permit for a redesigned plan that avoids the wall. Photo provided by the Town of Ocean Ridge

You might say the Ocean Club of Florida ran into a “brick wall” when it began replacing its swimming pool and deck in April.
Except it wasn’t a brick wall, but a concrete and steel one — a massive, nearly century-old sea wall that had been buried for years under the dune sands accumulating on the Ocean Ridge beachfront property.
The find came after construction crews had already ripped out the Ocean Club’s existing pool and deck, providing no option to leave things the way they were. Instead, the club submitted a redesigned pool and deck plan with the town, one that avoids the sea wall. The town approved the permit for the new pool and wading pool Sept. 13.
The new plan doesn’t change the rectangular configuration of the pool from its previous north-south alignment to an east-west one, as was originally planned. It keeps the same north-south configuration as the old pool, according to documents on file with the town.
It took some digging to reveal the history of the buried sea wall, which goes back 90-plus years to before the time of Ocean Ridge’s incorporation. Back then, the McCormick Mile south of the Boynton Inlet was known as Mizner Mile, after famed architect Addison Mizner, a Palm Beach socialite whose Mizner Land Co. had title to the property. 1935: Severe erosion along the beach just south of the Boynton Inlet led to the use of concrete groins and construction of the sea wall. Riddle Engineering photo provided by Boynton Beach City Library

Historian Janet DeVries Naughton said Mizner ended up taking his development ventures south to Boca Raton after being run out of Ocean Ridge — then part of the town of Boynton — by residents who took umbrage at Mizner’s plans for building a grand hotel and relocating Ocean Boulevard farther west to give his property more oceanfront lots.
Col. Robert R. McCormick, publisher of the Chicago Tribune, purchased the property in 1930 and immediately set to work extending a sea wall needed to keep the land from being swallowed by the ocean. Victor Searles, a partner in the Mizner company, began constructing the sea wall in 1929 because of sand erosion problems caused by the Boynton Inlet, said Naughton, of the Boynton Beach Historical Society, who has researched newspaper stories from that time.
The inlet, also known as the South Lake Worth Inlet, had recently opened and was starving the property of sand, with its jetties blocking the natural flow of sand from north to south. It wasn’t until a decade later that a sand transfer station was built to bring migrating sand south of the inlet.
The sea wall extended for more than 2,000 feet, including a second McCormick phase that began construction in 1935. Naughton said McCormick had plans to turn his property into a large seaport, but eventually sold the site. 1960s: Before sea oats and other dune vegetation grew in, the wall was all that divided the pool from the sandy beach. Photo provided

Over the decades, the beach and dunes gradually built up to the south of the inlet. The sea wall was still visible when the Ocean Club was constructed and opened in 1962, with the top of the sea wall within feet of the pool’s diving boards. Town officials said the Ocean Club’s original 1962 plot plan for the club’s construction showed the sea wall, and Naughton found an undated, mid-20th century map at the Palm Beach County Courthouse that included the sea wall as well. 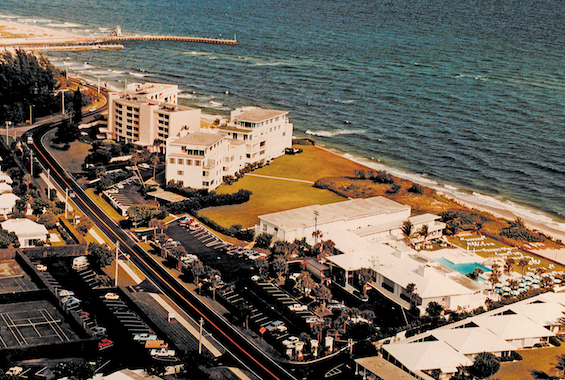 1986: In a view looking to the north, dune vegetation is beginning to fill in and the wall is still visible between the club and Ocean House North condo. Photo provided

But the sea wall became a faded memory, completely buried except for the portion uncovered during the Ocean Club pool excavation.
“The initial survey and application documents that were submitted as a part of the permit application package did not identify this sea wall,” town building official Durrani Guy said in an email response to questions from The Coastal Star.
Jeffrey Wagner, a senior vice president with Caulfield & Wheeler, the Boca Raton firm that did the survey for the Ocean Club, said his company has no way of locating underground foundations that are completely buried, and usually states that on its surveys.
John Mouw, vice president of Mouw Associates, which was hired by the club for the pool excavation work, referred all questions about uncovering the sea wall to the club. Ocean Club General Manager Joe Pavone declined to comment and directed any questions to the town.
“This is a private club,” Pavone said.
The town is taking steps to ensure the sea wall isn’t forgotten again.
“Town staff is currently doing research and compiling data about this sea wall,” Guy wrote. “Once this has been completed, the information will be archived and the structure added to our town maps and GIS system.”
The Ocean Club would not have been able just to bulldoze the wall to make room for a bigger pool.
“The town would require a United States Army Corps of Engineers permit to modify this structure in any manner,” Guy wrote.