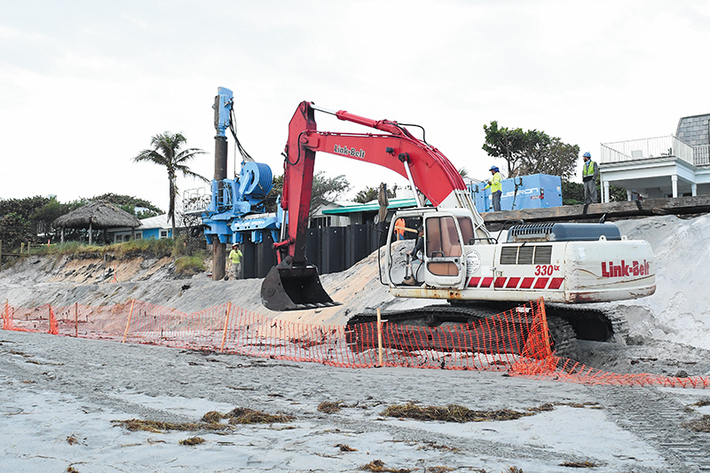 In February, Ocean Ridge commissioners declared a state of emergency after a series of fierce winter storms damaged 1,700 feet of the town’s coastline, tearing up dune lines and crumbling sea walls.

It turns out relations between neighbors may also have been damaged.

The Town Commission, during its November meeting, approved a plan that would allow a half-dozen oceanfront homeowners to build protective sea walls along their eroded dunes, with three of those homeowners agreeing to spend $70,000 of their own money to build a 20-foot section of sea wall for the town along the Anna Street crossover.

To bring in the equipment for the sea wall project, the town closed the crossover access at Edith Street and Anna Street.

Town officials thought they had a solution in place that suited the neighborhood. But a group of unhappy residents came forward en masse at the Dec. 7 commission meeting, complaining about losing their beach access and questioning why officials didn’t do a better job of informing the public about the project.

“Isn’t it a little odd that most of the people here had no warning and no idea that the beach access is going to be closed?” Hudson Avenue resident Theodore Ritota asked the commission. Ritota said he wasn’t opposed to building the sea walls but objected to closing “simultaneous beach access” points.

“It’s really disappointing to residents like us who buy properties here for the assets then find out an asset like beach access is being pulled out from under us,” said Sharon Monson, a Hudson Avenue resident.

Mayor Kristine de Haseth said the town faced an emergency situation in which the state Department of Environmental Protection made most of the decisions about how repairs would proceed. Commissioners had actually favored a more expansive sea wall project, but state environmental officials wouldn’t approve it.

“All property owners’ desires and needs were taken into account,” de Haseth said. The beachfront homeowners and their dunes, she said, “are the first line of defense for the entire barrier island.”

The commission discussed the project during its November meeting and posted diagrams, descriptions and aerial photos of the plan on the town website, before voting unanimously to approve construction. The work has to be done between December and March to avoid interfering with turtle nesting season.

“I think what’s fueling a lot of this concern is mostly our fault on the communication effort,” said Vice Mayor Steve Coz. But he said the sea walls were urgently needed. “Those houses are on the brink of falling in.”

Commissioner Susan Hurlburt said that although opponents may be “getting an inconvenience for four months,” the homeowners have no choice but to make repairs and the whole town benefits over the long term by “getting a little bit of sea wall out of it.” She said the town was committed to completing the work expeditiously.

The oceanfront homeowners have told the town they are committed to minimizing annoyances for neighbors — for example, the contractors are trying to reduce noise by pressing piles into place, rather than driving them.

“I’m delighted so many people came to the meeting and spoke out publicly,” de Haseth said. “I’d welcome them to come out again and stay involved.”