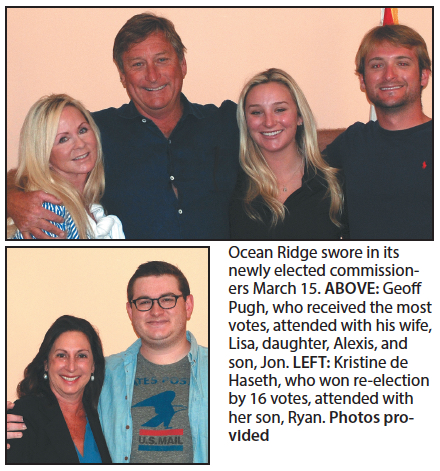 The Ocean Ridge charter says the Town Commission must select a mayor and vice mayor during its first regularly scheduled meeting after the municipal election.
That assignment is more interesting than usual this time, with the April 5 meeting, because three of the commissioners have served as mayor before and offer different perspectives on how to guide the town’s future.
Kristine de Haseth, the incumbent mayor, won re-election to the commission on March 9 with a 16-vote advantage over political newcomer Carolyn Cassidy, who finished third in the four-way race for two seats. Another political newcomer, John Kramer, finished fourth.
Geoff Pugh, who was the town’s mayor for six years until resigning from the commission in 2018, led all candidates in the race with 440 votes, or 34% of those cast.
Steve Coz, the incumbent vice mayor, was not a candidate in this election. He served as mayor for two years until de Haseth took over in 2020.
The other commissioners, Susan Hurlburt and Martin Wiescholek, also didn’t run in March and last year voted for de Haseth over Coz for mayor. They also have sided with her on most commission votes.
Both Pugh and Coz have criticized the direction of the commission under de Haseth, saying it passed too many ordinances and complicated the lives of property owners and contractors. Pugh said the town is meddling too much in the landscaping choices of individual homeowners and losing sight of more important issues such as increasing property values. Coz has said new ordinances such as the one that restricts artificial turf lawns infringe on homeowners’ rights.
De Haseth disagrees, saying Ocean Ridge property values have kept rising and new ordinances were necessary to preserve the town’s character.
“I have proven my leadership over less than three years by effective and empathetic leading during unprecedented times,” de Haseth says. “I have proven my fiscal responsibility by holding the tax rate steady and building reserves for the town and instituting a five-year capital improvement plan.”