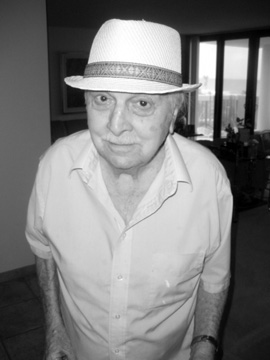 GULF STREAM — Frank Anthony Bianchini, who moved to Florida in 1970 with his wife, Rita, to escape the cold and start another chapter in the family business, died at his home Dec. 17 surrounded by his family. He was 88.
Born in Philadelphia on May 29, 1922, Mr. Bianchini — whom everyone called “Beke” — was one of 12 children in a hardscrabble, working class family that relied on each other to build a successful business enterprise.
“The saying on the job went, ‘You get your breaks on Broadway, not here,’ ” said his son, Mike. “And that’s the way his life was.”
A World War II veteran who fought in the Pacific with the 544th Engineers Boat and Shore Regimen, Mr. Bianchini met his wife at the Bang Bang dance on the Wildwood, N.J., boardwalk. The couple were married Sept. 21, 1946.
When he died, Mr. Bianchini had one photo in his wallet — that of his wife on their wedding day.
Family was an integral part of Mr. Bianchini’s entire professional and  personal life, and after the war he worked with his six brothers in their father’s business, S. Bianchini and Sons.  The company was expert at re-setting the original stones in older buildings and over the years they were hired for projects at important places like the The Betsy Ross House and the Military Academy at West Point. Mr. Bianchini became the family’s go-to guy at the beginning of the job, when setting up the scaffolding and other crucial equipment could be a bit of a logistical puzzle.
“He always knew exactly how to do it,” said Mike Bianchini. “My dad had a head for that.”
Mr. Bianchini and his wife moved to Broward County 40 years ago, where he donned another hat — that of developer and builder, transforming empty land into equestrian estates.
In 1987, Mr. and Mrs. Bianchini moved to Gulf Stream, where they spent many years enjoying their so-called golden years and entertaining their two sons and their growing families.
“My dad was quite a character,” said Mike Bianchini.
In addition to his love for family and hard work, Mr. Bianchini had one other well-known passion: the racetrack.
“I never saw anybody love anything so much,” said Mike Bianchini. “He wasn’t so happy on his way home, but he was always happy on his way to the racetrack.”
Mr. Bianchini also had a boat and occasionally owned race horses, his son said.
“He enjoyed life,” he said. “He and my mother had a ball.”
Several years ago, Mr. Bianchini was diagnosed with prostate cancer, which eventually unraveled his health. In recent weeks, the family had called in Hospice so that Mr. Bianchini could die at home, said his son.
In addition to his wife, Rita, and son Mike, survivors include another son, Frank; five grandchildren and four great-granddaughters. Mr. Bianchini was buried Dec. 22 at Queen of Peace Catholic Cemetery in Royal Palm Beach.