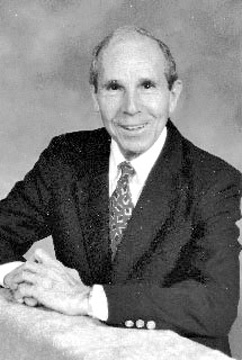 SOUTH PALM BEACH — When Ernest Muro moved to South Palm Beach in 1990, he was a retired schoolteacher and media specialist from Baldwin, N.Y.
But he never retired from community service.
In 1991, Mr. Muro was elected president of his condo board at Palm Beach Harbour Club.
Later, he chaired the South Palm Beach Community Affairs Advisory Board, helping to organize its popular music and lecture series, and was a member of the town’s budget and finance committee.
In 1994, he was elected to the first of three terms on the Town Commission, where he served as both treasurer and vice mayor.
And when the town held its annual amateur show, the South Palm Beach Follies, he was on stage, belting out Makin’ Whoopee.
“His big act was Eddie Cantor,” remembers acting Mayor Don Clayman, a close friend and neighbor of many years. “He looked just like Eddie Cantor.”
Mr. Muro died Nov. 29 and was buried at St. Charles Cemetery in Farmingdale, N.Y., beside Margaret McGavigan Muro, his wife of 44 years. He was 89.
“He was easy going, very intelligent, very involved, and one of those people you could talk to,” Clayman explained. “He was a good listener, which most people are not. He was a good man who gave his all to the town, to his family and to his friends.”
Mr. Muro was born on May 29, 1921, in Rockville Centre, N.Y.
After service in New Guinea with the U.S. Army’s 38th Infantry Division during World War II, he earned bachelor’s and master’s degrees from Hofstra University and a master of library science degree from Queens College.
He taught elementary school for 33 years before his retirement.
“He was very friendly man,” said his daughter, Heather Maguire, “a very warm, kind, gentle man.”
In addition to his daughter, of Avon, Conn., Mr. Muro is survived by his son-in-law, Jeffrey Maguire, and three grandchildren, Magi, Sean and Matthew Maguire; and a brother, Joseph Muro, of Freeport, N.Y.
In lieu of flowers, his daughter has urged all who knew him to “extend a smile to everyone, hug your loved ones, have lunch with friends and offer kindness to a stranger in his memory.”