DELRAY BEACH — During their 75 years together, Bill and Nancy Lorne were almost never apart.
Knowing how much their parents loved each other and how inseparable they were, family members predicted that there would be little time between their deaths.
“We always said that when Dad goes, Mom would be right behind him,” their son Michael said.
That came true on June 8, when Wilbur “Bill” Lorne died at the age of 96, and on June 9, when Nancy Lorne died at the age of 92 within 24 hours of her husband’s death. 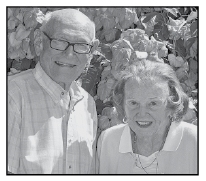 “This was the truest love story,” says Michael Lorne, who along with his brother Patrick runs the family’s Delray Beach funeral home, Lorne and Sons, that his parents founded in 1957. “There is no way those two could be separate.”
Nancy and Bill worked together at the funeral home for many years, with Bill serving as the funeral director and Nancy working as the secretary and handling books, while also helping with the hair and makeup of those who had died.
Even after Bill retired at 55, wanting more time to spend on the golf course and with family, Nancy continued to work at the funeral home, meeting with family members of those who died and helping in other ways where needed.
“They were very well-known in the community,” Michael Lorne said, adding that his parents met with many Delray Beach families — and others from nearby communities — over the years.
Both his parents were active in St. Vincent Ferrer Catholic Church in Delray Beach, with Nancy taking a leading role in planning an annual fashion show fundraiser for more than 20 years.
Bill Lorne was also an active member of the Delray Beach Lions Club and the Civitan Club.
“They were always very proud of Delray Beach,” Michael Lorne said.
A native of Lake Worth, Bill Lorne met Nancy while she was shopping at the grocery store where he worked in Connecticut.
They returned to South Florida when Bill decided he no longer wanted to deal with the cold, and raised their family in Delray Beach.
If they ever argued, Michael Lorne says, their children never heard it.
“These two absolutely adored each other,” he said.
Although Bill was still active and still driving at 96, Nancy had become ill and was bedridden in her home and was in hospice care. Her husband, who had been with her most of the day, was stepping out to get something to eat when he had a massive heart attack and was rushed to the hospital, where he died.
Nancy, who hadn’t talked in three days, asked family members how her husband was doing and learned what had happened. A short time later, her family said, she died as well.
The funeral home’s obituary for the Lornes was kept short on purpose because that’s what they would have wanted, family members say.
“They were very humble,” Michael Lorne said. “They would never talk about their accomplishments.”
The Lornes were predeceased by daughter Deborah in 1956 and son William in 2017. They are survived by two sons, Michael (Mary K.) and Patrick (Joan) Lorne, and daughter Cathy (Mark) Snow; seven grandchildren: Katy (Hammer) Lee, Kelley (Jeffrey) Potrekus, Jackie (Joe) Kingston, Kevin (Jamie) Lorne, Amy (Tim) Lubinsky, Jessica (Jon) Peck and Colin Lorne; six great-grandchildren: Morgan, Taylor and Madison Peck, Mateo Lorne Lee, William Potrekus and Dylan Lubinsky; daughter-in-law Michele Lorne and sister-in-law Pudgie Delohery; and their beloved dog, Dolly.