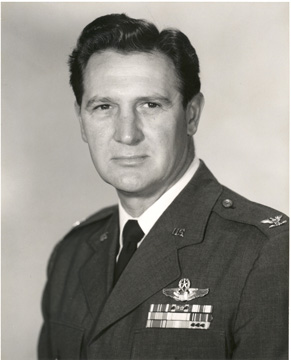 By Emily J. Minor
DELRAY BEACH — Ret. Air Force Col. George Robert Brendle, 92, died in his home at Seagate Towers
Condominiums on April 6 surrounded by his family, including his wife of 67
years. His son said he had been in failing health for some time.
Col. Brendle was born in Edwardsville, Ill., on March 8, 1918, and stayed in that
area until he was drafted into the U.S. Army shortly before World War II. As a
young Army private, he had a chance to test for pilot training in the Air Force
— a move that led to a long, distinguished military career, said his son,
Stephen Brendle.
“He came from very humble beginnings but managed to work himself up so that he was
a highly regarded serviceman,” his son said. “Dad never went to college.”
But his military career was stellar.
In 1943, Col. Brendle married the former Mary Ellen Rowekamp, also from
Edwardsville, in Sweetwater, Texas.
That same year, Col. Brendle was chosen for Officer Candidate School and was later
commissioned as a second lieutenant, flying nearly 70 missions over Europe.
Before that duty ended, he had been promoted to captain and was awarded the
Distinguished Flying Cross and Air Medal, his son said.
After the war, his military career took a particularly interesting twist. He attended
the Royal Air Force Staff College in England and joined the Strategic Air
Command, becoming squadron commander and flying B-47 jet bombers. After being
promoted to colonel, he was assigned early on as a staff officer for the
Minuteman intercontinental ballistic missile program.
Assigned to the Whiteman Air Force Base in Missouri, he became the wing commander of the 351st Strategic Missile Wing.
“He had a lot of people who thought very highly of him, even after he left the
service,” said his son.
Indeed, during his career — he retired in 1972 — Col. Brendle had an effect on many
great men, including U.S. Secretary of Defense Robert Gates. After his father’s
death, Col. Brendle’s wife received a personal letter from Gates, who worked
with Col. Brendle briefly in the mid 1960s.
Col. Brendle was at Whiteman and needed a Russian interpreter, and a young
lieutenant named Robert Gates was his man.
While the two men’s paths crossed briefly, they stayed loosely in touch through the
years.
“I was a brand new second lieutenant in 1967 and your husband always treated me
kindly, and with patience and dignity,” Gates wrote in an April 12 letter to
Mary Ellen Brendle.
Stephen Brendle said having Gates recognize his father was a great joy to the family.
Besides his wife and son, Col. Brendle is survived by a daughter, Andrea; two
grandchildren and one great-grandson. 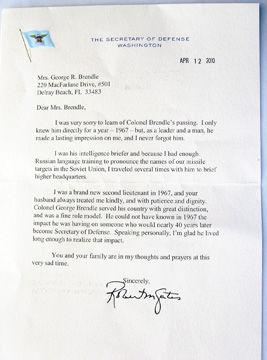