GULF STREAM — A homemaker, volunteer, loving wife and mother with a passion for life, Jane Gunther embodied the ideal to which every parent should aspire, according to her daughter, Debbie Gunther. 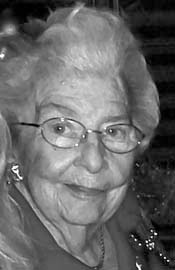 “She was a Donna Reed mom,” Gunther said. “She was always there for us. Very active, loved to play tennis. She was also a fanatic about animals. We had two dogs, two cats, every rodent you can name, fish, turtles. My mother just loved animals.”

Jane Gunther died of complications from heart failure on Feb. 17 at her home in Gulf Stream. She was 91.

She was born Jane Davis in Jersey City, N.J., on Feb. 7, 1924, and although she received an associate of arts degree in interior design from Skidmore College, she never took up a career, opting for a homemaker’s life.

The family lived in Dix  Hills, N.Y., until 1972, when she and her husband, the late Coulby Gunther, retired to Coral Gables.

Her greatest joys, her daughter said, were her family and friends. She is survived by three daughters, a son, eight grandchildren and seven great-grandchildren.

“She loved children, which is why she and my father built the Gunther-Davis Cottage for abused children at the Haven in Boca Raton,” Gunther said.

That organization is now known as the Place of Hope, whose mission is to provide a stable and loving family environment for hurting children and their families.

Executive Director Charles L. Bender III remembered a visit from Jane and Coulby Gunther when it changed hands some years ago.

“They wanted to make sure that her name would remain in perpetuity within the cottage,” Bender said. “I told them that it would. She was a very, very sweet lady. They are a tremendous family with a lot of love for her. It was so apparent. We’re glad the family name will remain here.”

Gunther added her mother’s life touched the lives of many others. A lifelong volunteer, she devoted her time to various hospital auxiliaries and animal welfare causes and was nominated three times for the Boca Raton Junior League Woman Volunteer of the Year award.

“Everybody loved her,” she said. “She accepted everyone — grandchildren, step-grandchildren — as her own. The woman was all heart. You don’t find women like her anymore. She was a true lady, the epitome of the word. Dignified, with an approachable warmth about her.”

Gunther said her mother’s cat, Nutmeg, was one of her last and closest friends — so close, in fact, that the two died within 60 hours of each other.

“Mom’s doctor said her spirit was with Nutmeg and when he died, she let go,” she said. “It’s obvious that those two had a plan with God. It’s hard to find a woman with the kind of class she had. Yet she was so down to earth.

“I remember we once looked for an independent living facility for her. This one place was very high class, where all the women had their diamonds and jewels on. She said, ‘I could never live here. These women are too stuck up!’ She had a wonderful upbringing.”