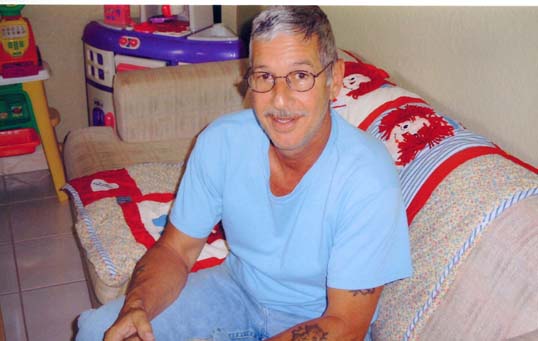 OCEAN RIDGE — Henry “Hank” Gribensk, 60, a veteran of the U.S. Army who many years ago used his opportunities in the military to get off drugs and turn his life around, died Dec. 5.
Mr. Gribensk was a well-known and well-loved property manager at two island condominium complexes, Crown Colony and Ocean Walk — where he also lived.
Rhonda Gribensk said her husband had been diagnosed with liver cancer about a year ago, and had declined rapidly in the last few months.
A native of Brooklyn, N.Y., Mr. Gribensk was the third of four children. The son of a Brooklyn produce driver, Mr. Gribensk was closest to his grandmother, who lived with the family. “You know how those big Italian families are,” said Rhonda Gribensk.
After his grandmother’s death, Mr. Gribensk dealt with the loss by turning to drugs, eventually developing an addiction to heroin, Mrs. Gribensk said.
“He went to rehab — a really hardcore rehab that straightened him out,” said Mrs. Gribensk, who met her husband about 15 years ago at the bowling alley in Boynton Beach, where he worked then as the manager.  “Then he went into the military,” she said.         “He loved the military. He did have a really hard life, but the military is what really changed him. After that, he was like a different person.”
The Gribensks had been married eight years and Rhonda Gribensk said he was the kindest, most loving man she’d ever met. “He treated me like a princess,” she said.
To the residents of the two complexes where he worked, Mr. Gribensk was the go-to handyman who could fix just about anything. “He was the greatest guy in the world,” said Patrice Mahon, who lives at Ocean Walk. “He was always happy, and would do whatever you asked him to do.”
She said she had visited with him on the afternoon of his death at his Ocean Walk condo.
Mr. Gribensk was buried at South Florida National Cemetery, the veteran’s cemetery on U.S. 441. Mahon said there were more than 50 people there.
“I looked around and, if it had been raining, there were too many of us to fit under the canopy,” she said. “It was very nice.”
Mrs. Gribensk said her son-in-law, Michael Roper, has been hired to take her husband’s job and manage the property at Ocean Walk.
Beside his wife, Mr. Gribensk is survived by their blended family of six children and 10 grandchildren. Mrs. Gribensk said all the grandchildren adored him, and called him “Papa.”