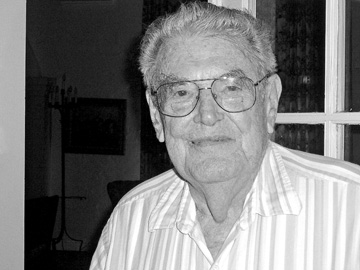 BOYNTON BEACH — When a wonderful storyteller dies, the family and friends who loved him tell wonderful stories.
When that storyteller was Harvey E. Oyer Jr., the stories they tell about the man must also be stories about the city he lived in, loved and served for 84 years.
Where did Boynton Beach end and Harvey Oyer Jr. begin? Where does the ocean end and the sky begin?
By the time he was born, on March 31, 1926, the town and his family were already history.
His great-grandfather, Hannibal Dillingham Pierce, came to Fort Pierce in 1871. His grandmother, Lillie Pierce, was the first white child born between Jupiter and Miami. His grandfather, Capt. Voss, brought Major Nathan Boynton here in the mid-1890s. His father owned the building on Ocean Avenue where Oyer would open a real estate and insurance agency in 1953, and run it for nearly 60 years.
The original phone number still lives in faded paint on the side of that building — 9305.
On the wall in a back office is the sign that adorned the town’s first railroad depot, salvaged by Mr. Oyer when the depot was demolished.
“We all can love a place,” said his son, Harvey E. Oyer III, “but my father loved Boynton Beach like no one else. He saw no reason to leave Boynton Beach. He didn’t want to live anywhere else. He only wanted to patronize businesses in Boynton Beach.”
But Mr. Oyer was not someone who loves what he knows because he knows little else. After graduating as valedictorian in his high school class of 1944, he earned a degree with honors from the University of Florida. During World War II, he served in the South Pacific. He was stationed in Germany during the Korean conflict, and traveled extensively throughout Europe. Harvey Oyer Jr. had visited China and Australia, Taiwan and the Philippines, too; but Boynton Beach and its stories were his heart and home.
In 1957 he was elected to the City Council. In 1960, he became mayor. He helped found the Jaycees, joined the Kiwanis, directed the local Red Cross and, of course, the Boynton Beach Historical Society. But what made him special were the stories.
“If you were going to sit next to him, you’d better not have to get up any time soon,” recalled his friend, Kim Kelly, with a laugh. “Because he would tell you a story, and he had plenty of them.”
In 1996, Kelly approached Mr. Oyer to inquire about opening a restaurant in his building. She wanted a restaurant and full-service bar. Oyer didn’t drink. They settled on beer and wine.
“There were times I fell back and cried and couldn’t pay the rent,” Kelly said. “If I only had a hundred dollars in my pocket, Harvey would say, ‘That’s good.’”
She told him he could eat there anytime for $4. Fifteen years later, Hurricane Alley has expanded twice.
“But he always called it the counter,” she said, “never the bar.”
That’s the kind of story people told after his death.
His son recalled a time in the early 1970s when a black man named Sam Wright approached his father for advice. Wright wanted to run for office. Mr. Oyer publicly endorsed him, and Wright became the first African-American on the City Commission.
Joyce Bartel worked as his housekeeper off and on for 20 years.
“He took me in,” she said. “He could be stern and strict, but he was always generous. He believed in a hand up, not a handout.”
When Ali Hoek arrived for her first day of work as his receptionist four months ago, Mr. Oyer cornered her.
“Tell me about your background,” he said.
“You mean my nationality or work?” she asked.
“Well,” he said, “both.”
Mr. Oyer loved stories like he loved the roast beef sandwich he ate almost every day, for $4, or the coffee at Dunkin’ Donuts.
Even Mr. Oyer’s death was a story.
On Monday, Dec. 13, he had breakfast at the Boynton Diner, as always, then drove to his office and suffered a heart attack in the building his father had built the year he was born.
“When the emergency team arrived, the paramedic who worked on my father had known him since her birth,” Harvey Oyer III recalled. “One of the police officers who arrived and escorted us to the hospital had been a friend since he was in high school. The nurse in the emergency room also knew and admired our father.”
The cooks at Hurricane Alley and the Boynton Diner brought food to his hospital room and held it beneath his nose. Another friend sang Christmas carols.
Mr. Oyer lingered in a coma for six days and died at 11:09 a.m. on Saturday, Dec. 18. The hospice nurse who pronounced him dead had known him, too.
His memorial service on Dec. 22 was in the First United Methodist Church on Seacrest Boulevard, a church his father helped build.
At his burial in Boynton Beach Memorial Park, color guards from the U.S. Army, V.F.W. and Boynton Beach Police and Fire departments stood at attention. 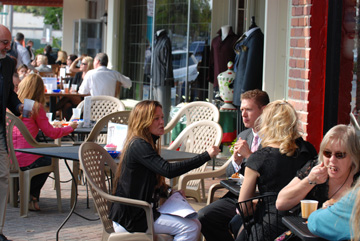 Shortly before 1 p.m., a crowd began to gather at Hurricane Alley, where the staff from Boynton Diner had joined to celebrate his life by feasting on the foods he had loved to eat, the foods he loved but couldn’t eat, and the foods he ate anyway.
On tables along the sidewalk were Triscuits and peanut butter, his favorite bedtime snack; doughnut holes, which he ate despite his doctor’s advice; and glazed cherries —“the only food Harvey didn’t like.”
Collard greens and chili dogs, pasta salad and pulled pork barbecue, mashed potatoes and beef stew.
For three hours, the people ate, and laughed, and remembered Harvey E. Oyer Jr.
The man who cherished the past had passed, but he had left his city a bigger and kinder place, and he had left stories.
In addition to his son, Mr. Oyer is survived by his daughters, Susan Oyer and Christian Macoviak of Boynton Beach; his grandsons, Joseph and William Macoviak; his sisters, Lois Dooley and Charlotte Oyer of Tucson, Ariz., his nephew, Patrick Dooley of Tucson; and his dear companion, Dr. Voncile Smith.