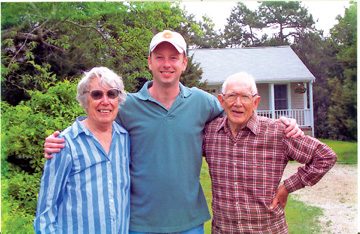 By Ron Hayes
County Pocket —When they saw the American flag at half-staff over Surf Road, the painting of Ponce De Leon against the pole, his neighbors knew Elvin Priest was gone.
A resident of the county pocket since the late 1960s, Mr. Priest died March 7 in Wareham, Mass., two months to the day after Nora, his wife of 68 years. He was 96 and had suffered from pneumonia.
Dubbed “Poncy-Poncy-DeLeoncy,” that portrait of the famous Spanish explorer was a local mascot, as loyal a presence at neighborhood parties as the wheelbarrow from which Mr. Priest dispensed cold beer, or the drums he played in local bands. It had been placed below the lowered flag when Mrs. Priest died, and it would be present at a casual neighborhood wake on April 3, too. 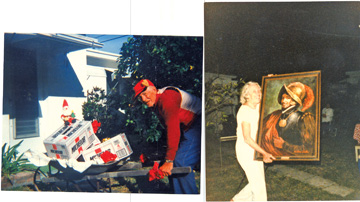 Elvin Priest was born Jan. 11, 1914, in Boston, to parents with a sense of humor. They gave him the middle name “High.”
“It was funny because my dad, right up until the end, was an agnostic,” said his daughter, Faith.
Drafted into the U.S. Army after Pearl Harbor, Mr. Priest served as a sharpshooter in both the European and Pacific theaters, then went to work for the U.S. Postal Service as a mail sorter in Boston’s South Station annex.
But his true calling was the drums, which he played in small combos and big bands, burlesque shows, hotel ballrooms and, finally, the Briny Breezes Choral Club.
“Al loved what he did,” remembers Carolyne Kelley, the club’s director. “His face was just glowing when he played.”
Already in his 90s, Mr. Priest decided to learn to play piano.
“He bought a keyboard at Marathon Music and brought it home, at least a mile, on his bicycle seat,” Kelley recalls. “He never acted old, and what a sense of humor he had.”
The boy who had been jokingly dubbed a “High Priest” by his parents retained his wit as an old man.
As he entered his nineties, his daughter recalled, the family urged him to spend a bit more of his savings, enjoy himself, live a little.
“After all, Dad,” she told him, “you can’t take it with you.”
The lifetime agnostic responded with a puzzled frown.
“Well, where am I going?” he quipped.
In addition to his daughter, Mr. Priest is survived by a son, Barry, of Bedford, Mass.; and two grandsons, Peter Nickerson and Jason Potteiger.
Donations in his name may be made to he Prasad Project, 465 Brickman Road, Hurleyville, NY 12747, which provides eye and dental care in the U.S., India and Mexico, or to a local food pantry.