SOUTH PALM BEACH — Bradley James Stewart Jr. was known as a jack-of-all-trades — and a master of pretty much all of them, according to his daughter, Sara Watson.
“He was an incredible handyman and was particularly gifted as an electrician,” she said. “My mom and dad bought a lot in Key Largo and he built a house from scratch. And there were 17 electric switches at the front door!” 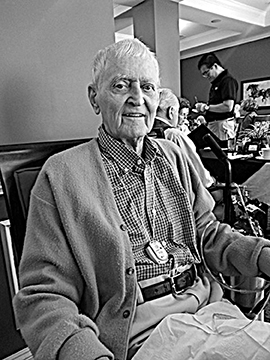 Mr. Stewart died Nov. 16 at his Leesburg, Va., home, because of complications from chronic obstructive pulmonary disease. He was 90.
Born Oct. 5, 1925, in Bowling Green, Ky., Mr. Stewart was just 16 when Pearl Harbor was attacked. He joined the Navy at age 17 and soon found himself elevated to the position of personal secretary to Admiral Chester W. Nimitz, in Hawaii — mainly because of an unusual office skill he possessed.
“He was one of the few yeomen who could type,” Watson laughed. “And he could type really fast. They didn’t have many women working in jobs like that during the war. It was the Navy and they just had men.”
After the war, Mr. Stewart studied agriculture at Western Kentucky University, then moved to Florida in 1947 to finish his studies at the University of Miami. When he left school he worked all kinds of jobs, his daughter said.
“He was a bartender, then he worked on a shrimp boat for a while,” Watson said. “Then he and his brother started the first newspaper in Fort Myers Beach. It only ran weekly.”
After a teaching stint at Warfield Elementary School in Indiantown, Mr. Stewart next headed out to California, where he worked in a factory and was injured in a car wreck. He came home to Florida to recuperate and it was there he met and wed his nurse, Gloria Gehl. The two were married for 50 years until her death in 2006 and had two children, Sara and Bradley James III.
Watson said her father eventually settled into a career with Delta Airlines in Miami — first as a baggage handler on the night shift. He was soon promoted to a ticket agent position, however, primarily because of his appealing demeanor.
“He just had a natural, friendly personality,” Watson said. “You couldn’t help liking him.”
Delta’s district office in West Palm Beach next lured him to work there and he remained with the company’s marketing division for 30 years until his retirement. But he continued to juggle new career opportunities with his involvement in a variety of civic organizations.
“He went to work for the Holiday Inn Downtown in West Palm, which is no longer there,” Watson said, adding Mr. Stewart went on to help found a local branch of Skal International, which is an organization of tourism professionals dedicated to friendship and networking opportunities in the industry. In addition, he served a term as president of the Kiwanis Club and co-founded the Bon Vivants, another social club in the area.
Then there was his work with bees. Mr. Stewart became interested in bees when he was about 12 or 13 and had a neighbor who had bees. As a Boy Scout, he pursued a merit badge for beekeeping. At age 85, he revived that passion while living in South Palm Beach and started his own beekeeping business, farming out his 17 hives — each hive consisting of 60,000 bees — for production of his “Backyard Honey,” which he mostly gave away.
“He was definitely one of a kind,” Watson said. “He was very generous and kind. And he could do anything — carpentry, electrical work, painting. He could wear a tuxedo and not get a drop of paint on it.”
Mr. Stewart is survived by his children Sara and Bradley James III, three grandchildren, a brother, two sisters and several nieces and nephews. Donations in his memory are requested for the Palm Beach County Beekeepers Association at 531 N. Military Trail, West Palm Beach, FL 33415 or the Florida State Beekeepers Association, 5002 NW 64th Lane, Gainesville, FL 32653.