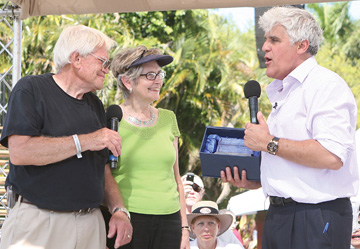 By Ron Hayes
Tom Gerrard scanned the green at the Boca Raton Resort & Club and ventured a diagnosis.
“If this were treatable, it would be a disease,” he said. And then he added the good news: “But there’s no cure.”
Not that the hundreds of car lovers strolling among those hundreds of cars at the fifth annual Boca Raton Concours d’Elegance that sweltering Sunday afternoon were looking for a cure.
Some were looking for prizes. Most were just looking.
From Friday, Feb. 25, to Sunday, Feb. 27, the posh resort’s golf course was turned into a parking lot for classic cars and motorcycles to be ogled, judged, awarded and, no doubt about it, envied.
With over 7,000 people attending, the three-day event raised nearly $3 million for the Boys & Girls Clubs of Broward County. Jay Leno performed and H. Wayne Huizenga was honored, but the real stars were the cars, from vintage Model A’s to 1965 Mustangs, a temporary automotive museum.
“Cars these days aren’t art,” Gerrard said. “They’re computer-produced and bean-counter engineered. This is art on wheels.” 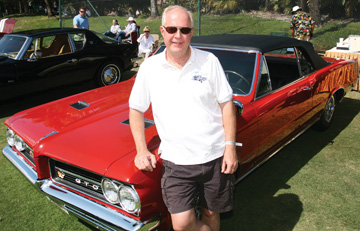 During his six years on the Manalapan Town Commission, Gerrard drove luxury cars. For everyday use, he had a 1995 Mercedes 600SL, a 2008 Cadillac XLR-V. But his classic collection grew.
He caught the incurable automotive bug in high school, working in an Amoco station on Sunrise Boulevard in Plantation.
“Guys came in with fancy cars, and I told my parents, ‘Someday I’m going to have a convertible.’”
In 1992, he bought his first collectible, a 1959 Eldorado, and the car bug bit.
Now, back in Big Sky, Montana, a five-minute walk from his second home, an underground garage protects his collection of 70 classic cars.
“I had a hundred at one point,” he says. “If I’d taken all the money I spent on cars the past 17 years and it put it in the stock market, I’d be in the hole by now. But these don’t lose value.”
This year, he’s entered a Grenadier red, 1964 Pontiac GTO Gran Tourismo.
“I bought the GTO in March 2008 from the original owners in Denver,” he says proudly.
He’s also showing a 1964 Corvair Monza Spyder, Honduras maroon with a white vinyl interior and a clear hood, to show off the rear engine.
“This is the car Ralph Nader came after,” he says. “Remember Unsafe At Any Speed?”
Does Gerrard drive it, at any speed?
“Yeah, it’s fun!” he says. “But he wasn’t totally wrong, by the way.”
Also competing in the same class as Gerrard’s GTO was Jeff Eder’s 1969 Ford Shelby GTO. The orthodontist lives in Ocean Ridge, but his GTO is listed as “Gulfstream aqua.” 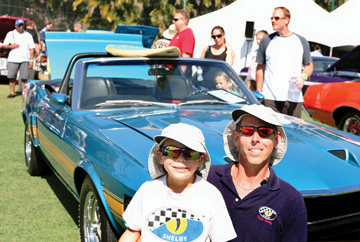 “I enter for the fun of it,” he says. “Look around, every car is pristine. It’s just nice to see people have taken the time to care for them.”
While Gerrard and Eder wait by their cars, chatting with passersby, a team of judges moves from car to car, rating each against a list of 45 points. What condition is the car in? How much of it is original?
And at 3 p.m., the trophies are awarded.
Tom Gerrard’s Corvair wins a third-place ribbon. His GTO takes first in its class.
This is not Gerrard’s first triumph. At last year’s show, his 1956 DeSoto Fireflite Pacesetter took a first place in the American Collector category, and his 1953 Chevy Corvette ranked second in the American Performance rankings.
“It’s not me that’s winning,” he says. “It’s the car. I’m
just the caretaker.”