Neighbors weren’t aware last January when Caron Treatment Centers applied to operate a top-tier sober house steps from the ocean.
They weren’t aware a few weeks later when the city gave the Pennsylvania-based Caron approval to operate a five-bed facility without even knowing the facility’s address.
They weren’t aware last April when Caron paid $1,595,000 through a local attorney to buy a house at 740 N. Ocean Blvd.
And by the time neighbors learned early last month about the planned rehab retreat for wealthy executives, movie stars and pro athletes with addictions, it might have been too late to do anything about it.
But they soon were fighting back.
Mindy Farber, a civil rights attorney who owns a house in coastal Delray Beach, was contacted by angered coastal property owners seeking legal advice to oppose Caron.
Farber said Caron’s application was “inadequate and required much more information and scrutiny.”
She also believed the city would be on sound legal footing if it tightened its regulations regarding the number of people allowed to live in a sober house and limited the turnover.
Word of the proposed seaside enclave for well-to-do rehabbing people trickled out last month after neighbors heard rumors and checked out Caron’s website. They noticed a familiar house. 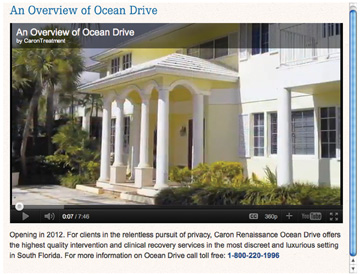 The website describe the house’s “away from it all” setting as perfect for paddle boarding, kayaking and walks on the beach just steps from “Delray Beach’s small town, urban chic charm.”
“This is outrageous,” said Bill McCauley, one of the Ocean Boulevard neighbors urging Delray Beach officials to tighten laws to prevent transient housing in single-family residential neighborhoods. “This is not welcome in our quiet beach community.”
Sober houses for recovering alcoholics and drug addicts aren’t new in Delray Beach. But no houses were known to exist east of the Intracoastal Waterway.
Until now.
Caron says it is marketing its “Ocean Drive” residence to a wealthy clientele that demands all the amenities. A lesser address won’t do.
“These are people of influence and affluence who are running your brokerage firm or might be your banker,” Caron executive vice president Andrew Rothermel said. “They are high performing but they have a chemical dependency.
“They don’t do well in a facility that has fewer amenities,” Rothermel said. Among the amenities planned for Ocean Drive, set to open this year: 24-hour staffing, and around-the-clock nutritionists and chefs, according to Caron’s website.
About two weeks after residents began complaining about the Ocean Drive proposal, Caron removed from its website a video and brochure touting the facility.
City records reviewed by The Coastal Star show that on Jan. 14, 2011, West Palm Beach attorney James Green applied  for “reasonable accommodations” for a residence to house recovering addicts that would be operated by Caron. He cited federal housing and anti-discrimination laws for not having to divulge the address of the house.
Attorney Farber’s response: Green’s request was a “misapplication of the law.”
She added, “Since it does not appear that they are getting treatment in Delray, we see no reason for the confidentiality of the address and we see no basis for the residents being considered disabled.”
Property records show Delray Beach attorney Michael Weiner acted as a trustee for an undisclosed entity when he purchased the 6,120-square-foot house last April.
Weiner declined comment. Rothermel said that Weiner “has represented us from time to time on a number of issues.”
Cary Glickstein, the chairman of the city’s planning and zoning board, blasted the transaction at a Dec. 19 zoning hearing.
“This is a commercial enterprise using attorneys to take title so the corporation can remain anonymous as long as possible,” Glickstein said. “It just plain stinks.”
Glickstein also criticized Paul Dorling, the city planning and zoning director, for approving Caron’s request to operate without asking for an address.
Dorling said, considering legal rulings that protect the privacy of recovering patients, that the address was “irrelevant.”
“It seems absurd that the city is granting approval without an address,” Glickstein responded. “It’s crazy.”
City officials have said that federal housing and disability-rights laws classify recovering addicts as disabled and entitled to “reasonable accommodations” for their recovery.
Those laws, city officials say, also prohibit them from asking for addresses of treatment houses because patients’ addresses are part of their medical records, and thus, confidential.
Dorling said Caron has city approval to house seven unrelated adults in the five-bedroom house. He has, he said, approved dozens of such “reasonable accommodation” requests allowing treatment centers to exceed the city law that restricts to three the number of unrelated people living together. Many of those had no address for the proposed facility.
Meanwhile, work crews in late December were busy reroofing and renovating the interior of the yellow Bermuda-style house at 740 N. Ocean Blvd.
Across the street, two oceanfront mansions are each on the market for $7.5 million.
Realtor Wendy Overton said she notified the owners of one of the houses about the new neighbors after the zoning hearing. “They’re not happy,” she said.
Neighbors who live on Southways Street, which borders the 740 N. Ocean house to the south, also are concerned.
“It’s scary. I can’t think of anything I’d rather not have,” neighbor Lois Bromley said. “I certainly don’t believe it’s good to have these kinds of people close to children.”
Heidi Sargeant said she is a next door neighbor, has three children and is vehemently opposed to transient housing.  She said it has the potential to be unsafe, adding, “Where are we going to put the eight cars?”
The house will have a chef and a masseuse, she said, adding, “Where are these people parking? I’m concerned about the value of our homes. Do you want that next to you? I don’t think so.”