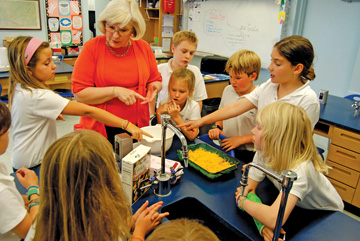 Nanci Moore’s Mix It Up class at Gulf Stream School simply can’t wait for Mother’s Day. Nine students in the after-school cooking class have a special breakfast surprise in store for their moms.

“My dad will say, “It’s Mother’s Day. Let’s let Mom sleep and we’ll cook for her!” said 9-year-old Fallyn Brody. She has it all planned out.

Almost all of the youngsters report that they’ve already cooked a little — some, a lot. Garrett O’Connor, 8, has sisters who bake cakes for parties, so he’s a baker’s assistant. “I make brownies and help with the cookies,” he said.

Freya Miller, 8, helps make dinner salads at her house, and sets a table. Mark Mahady, 9, helps his dad cook breakfast; he gets to crack the eggs. Eight-year-old Ashley Kent says she cooks often. “I make salads, make chicken. I put the stuff on the chicken before it goes into the oven. I make cookies and brownies, too.”

Moore says they’re all eager cooks. “This is a very popular class,” she said. “Every week, we have 12 or up to 18 students, if there’s no (lacrosse) game.”

Grades 1 through 4 participate as students; the older fifth- and sixth-graders become “happy helpers.” Moore also has teacher Wendy Zieglar to do the oven and sink work and give guidance. All get to eat their work.

“We do fairly easy recipes. We only have an hour,” Moore explains. A lot depends on ready-made food as a base. In this class they learned to make an egg casserole, chocolate croissants and a fruit cup. Using packaged croutons, refrigerated dough and shredded cheese help make the process quick and easy enough for even the youngest. 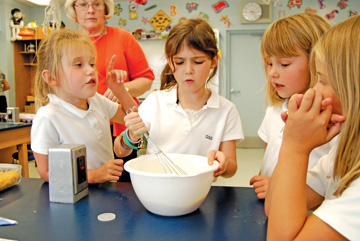 After demonstrating each dish, Moore turns the students loose for the hands-on preparation.

“Usually we only do one dish. That’s all we have time for. But this is a special meal,” she said. They accomplish the whole menu, plus a proper table-setting lesson, all in just over an hour. 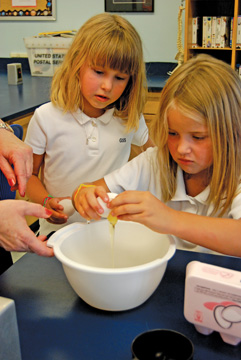 Sharing the chores for the egg casserole, they all get to crack an egg or two. Mason Delafield, 5, is here because her sister Finley, 7, is attending. Mason gets to crack one, with gentle guidance from her sister. A little shell gets in the mix, but no worries — Moore is there to dip it out.

The two casseroles go together fairly smoothly, then it’s on to the croissants, made from refrigerated dough. “This is really gooey,” Julie Moquin, 7, says, making a face as she rolls it out. 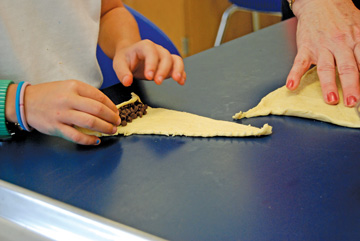 Moore sets down a container of mini chocolate chips for each table; they’re to be carefully spread on the wide end of the croissant dough and will melt when baked. “Not too many, or they’ll ooze out and make a mess on the cookie sheet.”

A few sneak some to eat. “No fingers in the chocolate chips,” she admonishes them.

She turns her back, and four small hands dive right back into the plastic cup. “I love chocolate chips,” Garrett says.

It’s tricky to keep their attention with those chips on the table, and some weren’t watching closely to see how the croissants are to be rolled up to create their crescent shape. A few are misshapen, but won’t suffer for lack of chocolate flavor, thanks to over-stuffing with the chips.

Last comes the fruit cup. “We’re going to cut up the strawberries a little bigger than we did for the strawberry shortcakes we made, OK?” Moore demonstrates with the plastic knives. “Then, how about a banana?” She slices one in rounds. “Now comes the pretty part — this is fresh mint.” It’s passed around for everyone to sniff. “Mmm. It smells like toothpaste.”

She breaks off a few leaves and decorates the fruit cup. “It looks like a palm tree,” Mark says. From then on, the mint is called “the palm tree.” 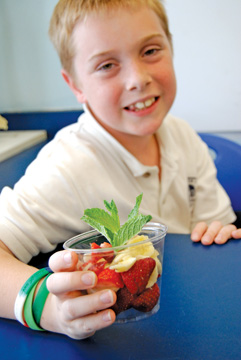 “Look! Garrett is going to layer the strawberries in his cup,” Freya says. Garrett’s cup shows a flair for design. At the other table, Mason has meticulously cut each strawberry into quarter-inch dice, and they, too, make an attractive cup mixed with the bananas she’s cubed.

“It’s however you want to do it.” Moore encourages the creative techniques.

“Now we’re going to set the table so it’s pretty for Mom.” She demonstrates the proper placing of plate, knife, fork and spoon, and the water glass. The paper napkin is folded in a rectangle, but Ashley shows how to fold it into a triangle. They all approve.

When they set up their own plates, Finley has folded her napkin into a triangle twice, so it stands up on the side of the plate like a pyramid. “Ooo. That’s like the restaurant does it.” Several others refold theirs to match.

“This is where your water glass will go,” Moore shows them how to line it up with the top of the spoon.

“How do you make coffee?” someone wonders. “We have a coffeemaker,” Julie says.

Finally, it’s time to eat. The browned casseroles are hot, the croissants nicely browned and not so many oozing chocolate as feared. The fruit cups stand pretty alongside the plates, all perfectly garnished with the “palm trees.”

“This is really good,” Stormy says. “I’m definitely making this for my Mom.” Others chime in. “When IS Mother’s Day?”

May 9, they’re told. Some are crestfallen as they expected it to be Sunday.

Finley and Mason consider the strategy of how to make this a surprise. “I’ll say, ‘We need to go to the store’ to Dad,” Mason says. “How long will the mint last?”

“A few days,” Moore says. Disappointment clouded her face, but Moore explained it’s readily available at the store, fresh — and she brightened.

“My mom is going to be so surprised!” Julie said. “She’ll say, ‘You cooked this all by yourself?’”

Jan Norris is a freelance writer/editor. Check out more recipe tips and ideas at www.jannorris.com. 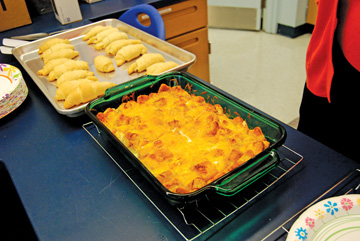