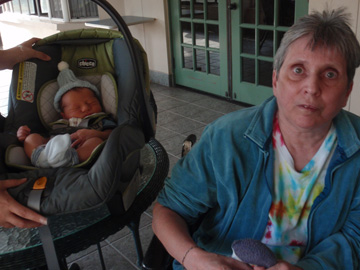 Sometime over the last few months, I noticed that when I’d curse around my mom, who has advanced dementia, she’d sometimes laugh. Now I curse around her on purpose, just to get a rise out of her.
If I’m walking her in her wheelchair outside at the nursing home, instead of saying, “It’s pretty warm out, huh, Mom?” and getting a monotone, “Yes,” I might say, “It’s so d*** hot out here I’m sweating my a** off,” and she’ll chuckle.
It’s one of the few ways I can be sure to connect with her.
Subtlety doesn’t work with dementia.
So when my wife became pregnant last July, I went about beating my mom over the head with baby info.
Suddenly, it was actually possible that my mom would see her new grandchild, a prospect I had written off a year and a half ago, when my mom was on a respirator and barely recovered. Now that I had the chance, I was going to do all I could so that my mom could experience the pregnancy with us.
I showed her ultrasound pictures over and over again. I pointed to my wife’s stomach over and over again.
Over and over again, I’d ask her, “What do you think the baby is, Mom, a girl or a boy?”
“Boy,” she’d say, without hesitation. She had two boys herself — one to whom she gave birth, and me, whom she adopted — and I’m sure that’s where that came from.
Every time, it was the same answer. “Boy.” “Boy.” “Boy.”
My wife said the baby had the vibe of a boy. She couldn’t really explain why. Something about feeling like the baby was hearty and tough. And after hearing my mom’s mantra of “boy, boy, boy,” she was certain she had a boy in there.
My wife and I had always agreed that when she became pregnant, we would wait until birth to find out the sex. We thought it would be more fun that way.
But with my mom in hospice, I decided it would be best to find out, so that I could tell my mom. If something were to happen to her, she’d at least know the gender of her grandchild. My wife readily agreed.
Then came the second ultrasound — the one where they can tell the gender.
Boy.
I showed my mom the ultrasound picture with the definitive evidence that the baby was a boy. There was no outpouring of emotion, but there was a slight smile.
I tried to get my mom to remember the due date, which was March 30. She never got good at it, no matter how many times I repeated it.
It went, “What’s the baby’s due date, Mom? March…?”
“Thirty-first,” she’d say. Or, “17th.” Or some other number.
We finally settled on the name Quinn. Then I had to get my mom to remember it. I’d be damned if I was going to have a son and have my mom not even know his name.
My mom had always remembered lyrics of old Elvis and Johnny Cash songs. It’s harder for the brain to forget words put to a melody. And I’d once made up a jingle to tell her I love her. “I love you, love you, love you…” it went, ending with “I love you, momma dear.”
When my mom got used to the song, I’d let her finish it. Me: “I love you….” Her: “Mom-mom dear.”
(Pretty silly, but if you’re going to be able to deal with dementia, the last thing you can afford to be is self-conscious.)
I made new lyrics for the same jingle, ending it with, “And his name is Quinn.” After one rehearsal, my mom remembered how to end the song, singing, “Quinn.” Presto, she knew my unborn son’s name.
Now, I just had to get her to the actual birth. I couldn’t help but imagine a nightmare scenario where my mom would die hours before Quinn’s birth.
A caesarean section was scheduled for March 17 — one of the dates my mom had incorrectly given as the due date months before. The night he was born — a healthy 9 pounds, 7 ounces — I was not allowed to stay at the hospital because they’d had a lot of births and no private rooms were available.
I was flabbergasted that I had to leave, but took the opportunity to drive straight to the nursing home at 10 p.m. and, with only the glow of the TV lighting her cramped side of the room, showed my mom videos of Quinn in the warmer and getting his first bath and of me combing his hair.
Three days later, when we left the hospital, we didn’t go directly home — we went to see my mom first.
I had imagined my mom bursting out in tears at the first sight of her grandson. Instead, there wasn’t much reaction. After all the preparation and talking about baby this and baby that, I think she knew who he was, but I don’t know for sure.
I maneuvered her arm so she could touch his impossibly soft skin. We took pictures of them together. She’d glance over at him, but then look away again.
But there was no taking away from the moment: The impossible had happened. My mom, seemingly so near death in 2009, had met her new grandson.
Before we left, just to make sure, I asked her: “And his name is?”
“Quinn.”

Thomas R. Collins is a freelance writer living in West Palm Beach. This is part of  an ocassional series chronicling his mother’s journey through dementia.

Tags: column, dementia, mom and me
E-mail me when people leave their comments –
Follow