When it opened in 1991, the shopping complex transformed Boca Raton’s downtown into an urban hub 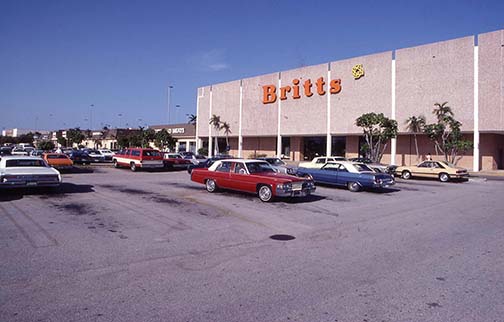 TOP: The Boca Raton Mall in the ’80s. ABOVE: Cars turn onto Plaza Real in Mizner Park, which replaced the mall in 1991. Tim Stepien/The Coastal Star

With gurgling fountains, inviting gazebos, alfresco (and indoor) dining options, the Boca Raton Museum of Art, an amphitheater that hosts major concerts and community events, and dozens of shops, Mizner Park remains a popular destination for locals and visitors alike.

But this shopping center, which is 25 years old this year, is more than just a pretty face.
Mizner Park, off Federal Highway a block north of Palmetto Park Road, has had a big impact on stimulating growth in downtown Boca Raton. Before it was built, there were only 73 housing units in downtown Boca Raton and office rents were the lowest in the county. Those numbers changed drastically after 1991 with the development of Mizner Park, the 29-acre mixed-use project with shops, restaurants, offices and apartments. 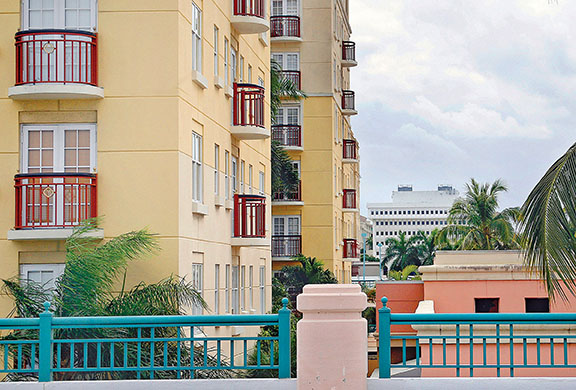 Looking south from Mizner Park toward what is now the Bank of America tower at 150 E. Palmetto Park Road. Tim Stepien/The Coastal Star 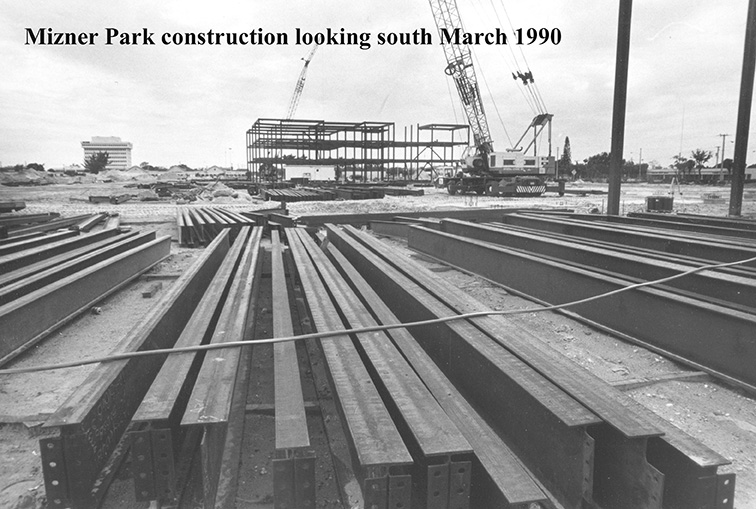 The tower stands prominently on the Boca Raton skyline while Mizner Park is under construction around 1990.  Courtesy of the Boca Raton Historical Society

By 2002, there were 689 housing units and more than 900 being built downtown. Office rents were the highest in South Florida, according to the records at the Historical Society of Palm Beach County.
The 14-fold increase in assessed property values from 1990 to 2002 improved the city’s tax base. In 2005, after property values rose again, Mizner Park started paying for itself.
“Mizner Park was highly controversial in the beginning, but it rolled with the punches and kept up with the times,” said County Commissioner Steven Abrams, who was on the City Council when the shopping center was built.
“Today, nearly everyone points to Mizner Park as an example of good urban design,” he said. “It was one of the first New Urbanist projects in the country, and yet after all these years, it is still a very popular destination.”
But how did it all begin?
In the 1980s, according to the Historical Society, local builder Tom Crocker worked with Boca’s Community Redevelopment Agency to replace the old Boca Raton Mall. Residents voted to spend $50 million in infrastructure improvements and $68 million in bond financing to help the project get off the ground.
The controversies Abrams referred to resulted in higher local taxes, lawsuits and heavy debt, as well as new state laws and restructuring city government.
But the shopping center was recognized by the U.S. Environmental Protection Agency for removing blighted property and creating a dynamic community gathering place.
“Boca Raton residents love to take their out-of-town guests to Mizner Park to show it off,” Abrams said. “Mizner Park has also hosted many fine cultural and community events over the 25 years.”
The old Boca Raton Mall, torn down to build Mizner Park, opened in 1974 and survived only for 15 years. The mall housed the city’s first escalator. Stores included Jefferson’s department store, a movie theater, Orange Bowl beverage shop, Walgreens Drug (with a restaurant), Rock of Ages Records and a Bavarian restaurant.
Crocker bought the old mall in 1988 with the intention to raze it to make room for Mizner Park.
Today, Mizner Park includes 236,000 square feet of retail space; 267,000 square feet of office space; luxury rental apartments; town homes; and cultural arts space and a 5,000 capacity amphitheater.
Andrew McKinney, general manager of Mizner Park, said that although definite plans to mark the 25th anniversary have not been made, they are being considered.

“We’re aware of the milestone and we’re discussing plans,” he said in late February.