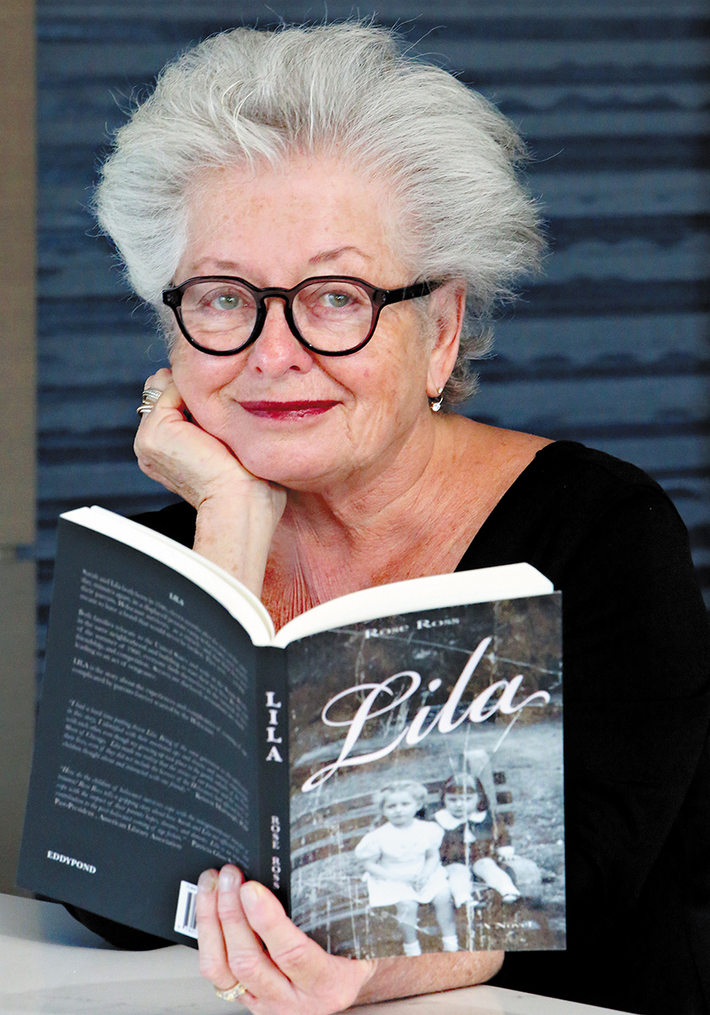 Delray Beach resident Rose Ross never imagined writing and publishing a novel at age 74. And when she did, she was surprised at how well it was received. Tim Stepien/The Coastal Star

When Rose Ross sat down to write a fictionalized account of her own growing up in the Bronx as the daughter of two Holocaust survivors, it’s fair to say her expectations for how it would be received were low.
“I didn’t think anyone would want to read it, other than family and friends,” said Ross, 75, of coastal Delray Beach.
When she completed the writing, those she worked alongside at writers workshops at Old School Square pushed her to get it published. She demurred.
“I don’t think this is a book for everyone,” she said. “I’ve always known that. But the response I’ve gotten from people of all ages is unbelievable.”
Titled Lila, the book sprang from a screenplay she had been working on. The screenplay had 14 characters; the book ultimately had three: herself, her dear friend Lila and a fictional boy named Michael who was invented as a go-between for the two.
Her decision to write it in the first person, as it turned out, made the writing easy. “Once I started that format, it moved,” she said.
Upon putting the book up for sale on Amazon in 2020, she reached out to everyone she knew to promote it and was able to schedule readings at places such as the Delray Beach Public Library and on book clubs on Zoom. And it took off.
“I just figured I’d have a reading, some people would show up, and we’d go out and have a wine afterward. That’s all I expected. But it came out to be so much more.”
She didn’t expect it to have a male audience, but it did, as she learned one day when a man in her building approached her with tears in his eyes.
“He says my book brought him back to an incident in his life when he was growing up in the Bronx,” she said. “Of a kid he bullied, and treated so poorly. When he was reading my book, he said, ‘I should have been nicer to that kid, because your Michael, the main character, was who that kid was.’ So I got reactions like that.”
When she’s not writing — and now she’s doing a screenplay that has been in the works for years — Ross keeps busy pursuing the other arts.
“My loves are theater, dance, concerts and film,” she said. “I’m a real film buff.”
So much so that when the old Regal theater in Delray Beach, which used to show many foreign films, closed down, she launched a five-film series in her building before it was interrupted by the pandemic. She hopes to resume it whenever life returns to normal.
— Brian Biggane

Q: Where did you grow up and go to school? How do you think that has influenced you?
A: I was born in Germany in a displaced persons camp and immigrated to the United States in October 1949. Our first apartment was in the South Bronx, and then when I was about 10 we moved to DeKalb Avenue, around the Gun Hill section of the Bronx. Our neighborhood was pretty diverse, with a mixture of survivors of the Holocaust, American Jews, Italian, Irish. I went to elementary school there and then went to the High School of Performing Arts in Manhattan, where I majored in drama.
It was at Performing Arts that my life changed. I discovered people from every background and religion. It was a world where you could be as different as you wanted to be, take on different personas each day if that suited you, and no one looked at you funny. It wasn’t always easy, but I walked away from that school and carried the lessons I learned with me to this day. Plus, it was fun!
In the movie Fame, which is based on Performing Arts, there is a famous lunch scene where everybody dances and sings. That was pretty much the way it was in real life.

Q: What professions have you worked in? Of what professional accomplishments are you most proud?
A: Once I realized that I was not a very good actress (if I had to do it all over again, I would have chosen to be behind the camera), I decided that I needed to discover new ways to move ahead in the world. It wasn’t until I married that I started to get involved in activities that truly shaped the person I am today.
One, of course, was adopting my two children from Seoul, Korea — Sarah Noell Ross and Edward Michael Ross. They are today 39 and 38 and wonderful human beings. I am very proud of them.
When we moved to Westchester, I felt the need to get involved and became an active volunteer. I started as a literacy volunteer at a men’s prison in Westchester and worked in soup kitchens for the homeless.
When we moved to Columbia County in New York, I became an auxiliary member at our local hospital, chaired the hospital ball for four years, creating unique venues, raising attendance from 150 to 850. From that experience, I made successful fundraisers for two theater companies where I was a board member and for the Chatham Film Club, which hosted the Film Columbia Film Festival.
Through the Chatham Film Club, I met Courtney Hunt, a screenwriter and director who moved to Columbia County. She started a screenwriting class that I attended, and I discovered my new passion, writing. One year later, my first screenplay opened up the new screenwriters contest at the film festival. I later collaborated on a play adapted from an original script and joined a writers group that enriched me as a person and a writer.
In Delray, I joined the Writers Colony at Old School Square run by Barbara Cronie and became friends with another remarkable group of people. They guided me, and I owe them everything. Their support enabled me to achieve something I never imagined — writing and publishing a novel at age 74!
In 2020, a longtime friend of mine, Carolyn Schroth, and I created a film series on social justice called “Thinking Out Loud 2020.” We partnered up with St. Paul’s Episcopal Church and the Delray Beach library.
Our first season had an unexpected attendance — a Q&A was held after each screening. The conversations between the audience and the panel of invited professionals were thought-provoking and intimate.

Q: What advice do you have for a young person seeking a career today?
A: Never give up. Seek out people that are committed like you. In regard to writing, find a writing group that you are comfortable with, be open to feedback.

Q: How did you choose to make your home in coastal Delray Beach?
A: My friend convinced me. She promised me that Delray was as close to Columbia County as you could get, only with palm trees.

Q: What is your favorite part about living in coastal Delray Beach?
A: The beach, the Intracoastal, the richness of a community that was unexpected for me. And life is much easier without snow and ice!

Q: What book are you reading now?
A: The Lying Life of Adults by Elena Ferrante, author of My Brilliant Friend, which is part of the Neapolitan quartet. In many ways, her perception of the adolescent journey to adulthood inspired me to write Lila the way I did.

Q: What music do you listen to when you want to relax? When you want to be inspired?
A: Motown, Eric Clapton, Billie Holiday and anything by Luciano Pavarotti.

Q: Have you had mentors in your life? Individuals who have inspired your life decisions?
A: I have been fortunate to have met some extraordinary people in my life and am grateful to each one of them. My mother was an amazing woman who taught me what kindness and humanity was, and my husband, Edward, for his constant support.

Q: If your life story were to be made into a movie, who would play you?
A: As a young girl, not sure. As an adult, Meryl Streep or Helen Mirren.

Q: Who/what makes you laugh?
A: My husband makes me laugh every morning, day and night.