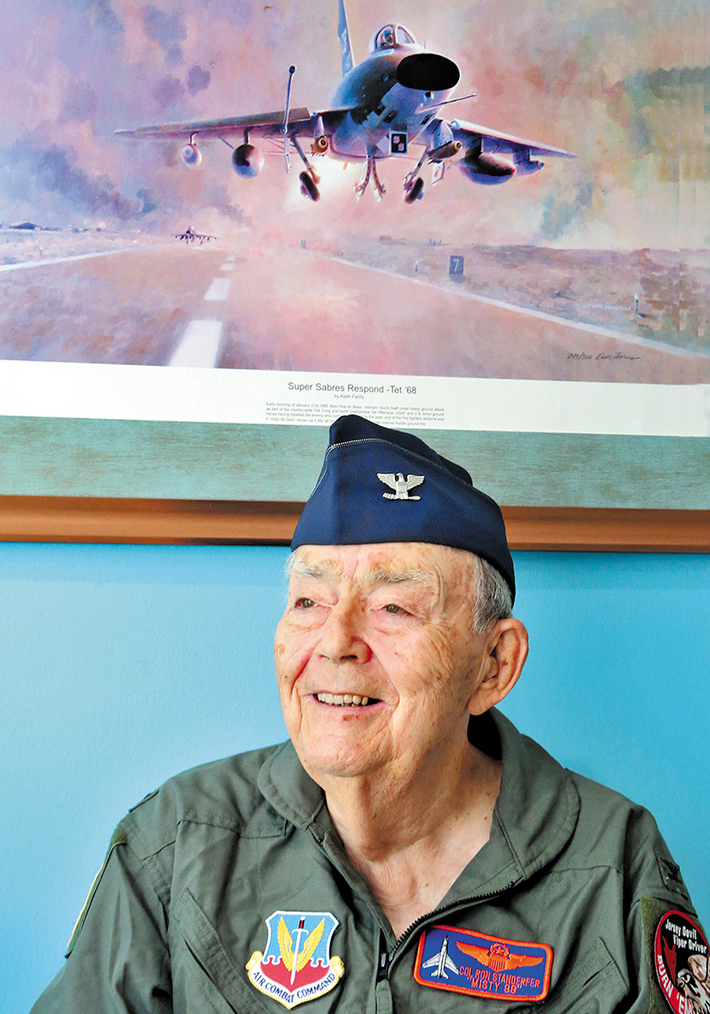 Retired Air Force Col. Ron Standerfer of Gulf Stream keeps an image of the F-100 Super Sabre, an aircraft he flew in Vietnam. In 1969, he was shot down and ejected over Laos. He received the Purple Heart. Tim Stepien/The Coastal Star

No matter that it happened more than 80 years ago, Dec. 7, 1941, is still etched in the mind of Gulf Stream’s Ron Standerfer.
“I came down the steps from my bedroom and saw my father listening attentively to the radio while the Japanese were bombing the naval base in Hawaii,” Standerfer, 87, recalled.
“The look of seriousness on my father’s face told me this was big stuff, and planted the first seed of what would become my career.”
That career, which included 237 combat missions during the Vietnam War and ultimately earned him a Purple Heart, two Silver Stars and 13 Air Medals, was celebrated this past May when Standerfer was invited by the Air Force to the unveiling of an F-100 jet refinished in the markings of one he was flying when he was shot down over Laos in April 1969.
Standerfer’s father was too old to be drafted when the U.S. entered World War II, so he volunteered and was sent to boot camp in Idaho, then on to San Francisco, where the Navy made him a signalman and assigned him to an aircraft carrier in the Pacific. Standerfer and his mother followed — he attended the third grade in San Francisco — before returning to their native Belleville, Illinois.
Standerfer went to the University of Illinois, but by early in his sophomore year his grades were so poor he worried he might flunk out. With the Korean War on and knowing he would be drafted if that happened, he joined ROTC and soon after visited a local air base that had a vintage WWII bomber on site.
“It was my first airplane ride, it was noisy as hell, but boy, by the time it was over I was hooked on flying,” he said.
He learned about the aviation cadet program and that if he passed a physical and spent a year as a cadet to learn how to fly, he could join the military as a pilot.
“So that changed everything,” he said.
The war ended only months after he joined the Air Force in 1954 so he didn’t get a chance to participate, instead joining the New Jersey National Guard 177th Tactical Flight Group.
Fourteen years later, in January 1968, Standerfer was working as a newly hired flight engineer for Pan American Airways when the USS Pueblo was seized off North Korea and accused of spying.
President Lyndon Johnson called up 14,000 Guardsmen to Vietnam, including Standerfer’s group, and he was one of 11 pilots who volunteered for combat duty.
“The other pilots had been there for a year and thought we were going to be a bunch of hicks,” Standerfer said. “But it turned out we had way more experience than they did, and we were the ones who became the flight commanders.”
Twenty-two of his missions were as part of the secret and highly dangerous “Misty” program, flying F-100 Super Sabres over North Vietnam and Laos. Shot down by antiaircraft fire on April 1, 1969, he and air crewman Lacey Veatch were rescued by a U.S. helicopter.
“I’ve had “some pretty unusual things happen to me,” he said. Among them:
• When he was 21 his operations officer in Maine picked him to watch a test of an atomic bomb near Las Vegas. “They miscalculated the strength of it, and it was twice as big as the Hiroshima bomb. I stumbled across a military film of it (later) and there were guys and girls wearing sunglasses at hotel pools in Las Vegas watching this mushroom cloud going up 20 miles away.”
• When he returned from Vietnam he was sent to train on a single-engine F-105 fighter bomber. “On my very first flight the engine flamed out when I came back to land, so I almost had to bail out. I got the engine started. The first thing you learn in the military is how to start an engine when it quits in the air. ”
• After dinner one night in Lima, Peru, he was kidnapped by three armed men. “They had a gun to my head but kept arguing about what they were going to do. They let me go and drove off and I had to hitchhike back to my hotel.”
Standerfer has been married to his wife, Maya, a native of Poland, for 33 years and has three stepchildren: John Harrell, 57, who works for the Navy in Washington, D.C.; Steve Harrell, 56, the vice president of a computer company in Pittsburgh, and Michael, 50, an artist in New York.

Q: Where did you grow up and go to school? How do you think that has influenced you?
A: I was born and raised in Belleville, Illinois, a town across the Mississippi River close to St. Louis. I went to Belleville Township High School. The proximity of a large Air Force base exposed me to the Air Force way of life.

Q: What professions have you worked in? What professional accomplishments are you most proud of?
A: I spent 27 years flying a variety of high performance fighters including the F-100, F-102, F-105, F-4 and A-7. After I retired, I was a marketing director for Falcon Jet Corp., a subsidiary of the French aerospace manufacturer Dassault Aviation. Later, I was an owner of an aircraft charter and management company in Elmira, New York.
The most significant period of my professional life was my combat record during the Vietnam War. I flew 237 combat missions and was awarded two Silver Stars, 13 Air Medals and the Purple Heart.
Based on my experiences, I wrote a book, The Eagle’s Last Flight, a fictional novel.

Q: What advice do you have for a young person seeking a career today?
A: Be realistic about your professional goals.

Q: How did you choose to make your home in Gulf Stream?
A: We chose Gulf Stream as our permanent residence seeking a different, more quiet lifestyle than living in New York City. The Atlantic Ocean is roughly 20 yards from our balcony. But another part of the equation was there was a large VA hospital in West Palm Beach and I wanted to be close to that. So, we bought a condo here about 15 years ago.

Q: What is your favorite part about living in Gulf Stream?
A: Having ocean in front of my windows and beautiful nature. A small-town environment suits me perfectly.

Q: What book are you reading now?
A: The Lincoln Highway, by Amor Towles. I like that writer very much because of another book he wrote called A Gentleman in Moscow. Excellent writer.

Q: What music do you listen to when you want to relax? When you want to be inspired?
A: Classical music, especially Chopin and Beethoven. I was a music major when I went to college and that’s where the classical came in.

Q: Have you had mentors in your life? Individuals who have inspired your life decisions?
A: Maj. Gen. Evan Rosencrans was my mentor and source of advice until he died. He was the operations officer in the first squadron to which I was assigned. He was a real gentleman and ultimately was promoted to two-star general. He followed my career very closely and gave me a lot of good advice.

Q: If your life story were to be made into a movie, who would play you?
A: Tom Cruise because he is a natural-born leader, a typical fighter pilot who takes risky chances. The boys out there in Top Gun School and all that stuff, they have done a very fair presentation of what Navy pilots like that were like, and Air Force too. We broke rules, we chased girls, we drank a lot, it goes on and on. The second movie was better than the one before, at least I thought so.

Q: Who/what makes you laugh?
A: A good joke when I hear one.