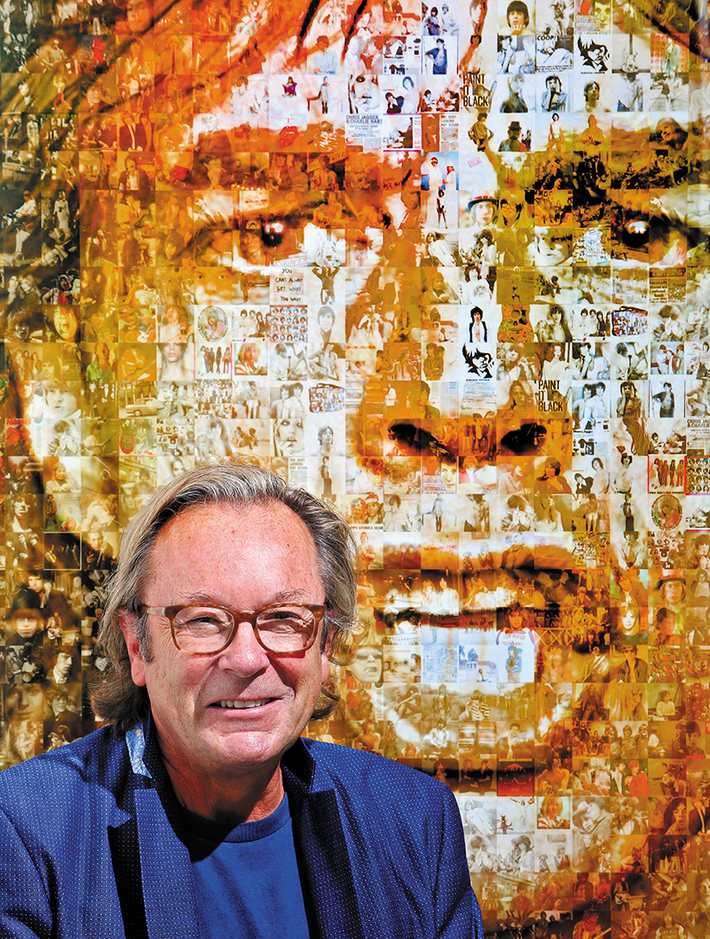 Robin Austin of Ocean Ridge, a retired ad agency owner, is now a mosaic artist. This 3- by 5-foot image of Mick Jagger is titled His Majesty. Austin assembled hundreds of little photo squares to make light, shadow and colors in the portrait. Tim Stepien/The Coastal Star

Robin Austin spent 30 years in marketing, working for some of the top firms in the world before starting his own, Fusion 5, then selling it for a handsome profit in 2003.
Not yet 50, Austin then faced the obvious question: What next? He didn’t have to go far to find out.
“I had always been intrigued with mosaics,” said Austin, 67. “I remember one done by Heineken of a tulip field in Holland, and all the mosaics were of tulips. I said, ‘That’s so boring.’
“So I’m literally lying in bed and saying, ‘What if you did a mosaic where the mosaic is telling a story? And what if it’s something fun?’
“I figured there had to be so many artists doing this. So it was, let’s find out, and to my absolute astonishment nobody was doing it. So I decided to become an iconic mosaic storyteller … a visual celebration of the icon.”
Austin used the TV series Breaking Bad as the theme of his first piece, a birthday present to his son James. Soon after came one of Princess Diana, then Nelson Mandela and Mick Jagger.
Using a computer and Photoshop, he used 3,500 tiny photos in a celebration of David Bowie.
Now his pieces number more than 100.
The Ocean Ridge resident entered six into a minor art show in Miami and, with the help of a story in Venue magazine, his work was picked up by three galleries.
“They got what I was doing,” he said. “They said, ‘You are shamelessly commercial.’ And I said, ‘Absolutely.’ And now I’m in art galleries all over the world.”
Austin also invented a golf putting aide called EEZ-Read that was named “Best New Product” at the 2008 PGA of America Merchandise Show.
He and his wife of 32 years, Mickey, moved to Ocean Ridge three years ago. He’s a huge fan of Leeds United and the England soccer team and enjoys walking the beach and cleaning it up.

Q: Where did you grow up and go to school? How do you think that has influenced you?
A: I grew up in Yorkshire, England, in Leeds, which is 200 miles north of London. I was born in 1954 so the ’60s had a profound effect on me. In television, movies and music it was an incredibly interesting time. In the ’50s the icons were movie stars and by the ’60s it had changed completely. It is the music, the Beatles, the Rolling Stones; it’s fashion, it’s Carnaby Street, it’s Flower Power. There’s a rejection of conventions, like the Vietnam War. And by 1975 … look at The Rocky Horror Picture Show. That would have been totally unaccepted in the ’50s.
So this all affected me very much. It was an era of fabulous, and I was like ‘Wow.’ So now when I can celebrate it in my art, I so enjoy doing it.
That was a time when a lot was happening. I went to an English boarding school and then I went straight into business.

Q: What professions have you worked in? What professional accomplishments are you most proud of?
A: I met Tom Bauer, the head of Procter & Gamble in Europe at the time, and when I met him with friends in the south of France he said, “This boy should be in advertising. He’s creative, he’s fun.” So he arranged for me to be introduced to an American ad agency and it was a square peg in a square hole. It came easy to me, I had an outgoing personality, I was well-educated and well-mannered, so it really suited me.
I was in Stockholm with Young & Rubicam and they offered me jobs in London and New York. Here I am, 26 years old, and I hear “New York, Madison Avenue.” I’m young and single, so off I went. I worked really hard, moved up the ladder, and another company, MCA, came along and doubled my salary before I was 30.
Then in 1993 we founded our own company. We saw a changing marketplace and identified a new problem, and created Fusion 5. Our tagline was “Innovation Out of Insight” and we were very cutting edge. I was very proud of the innovative work we did, that really influenced and changed companies’ directions. We sold the company in 2003.

Q: What advice do you have for a young person seeking a career today?
A: My advice would be to soak up everything. Knowledge is growth. In the early part just soak it up; don’t take yourself too seriously but have a broad view. Then start evaluating what you really want and are passionate about. The old story holds true: If you really like and believe in what you’re doing, then go off and do it.

Q: How did you choose to make your home in Ocean Ridge?
A: My wife’s parents, Jim and Mary Farley, owned property down here in Gulf Stream and introduced me to the area, and who wouldn’t fall in love with it? You fly from New York and land in Palm Beach and it was just fabulous. You’ve got Palm Beach sophistication up the road, Miami down the road. I can get to London from Miami in one plane ride. So the whole area works for me. And I didn’t come to retire; this is a next chapter of my life.

Q: What is your favorite part about living in Ocean Ridge?
A: The people are exceptionally nice. Young, older, the different walks of life we’ve come from. It’s a 75- to 100-yard walk for me to the beach and I talk to probably five people every day. And they’re fantastic.

Q: What book are you reading now?
A: I use audiobooks. But I constantly listen to them. I have a range. I love getting perspective on pop culture and modern-day culture versus 20 or 30 years ago. There are a lot of very good journalists that write pieces in good magazines and then write a book to expand upon that. One I’m into at the moment is the subject of Bitcoin and cryptocurrency, which is going to be the wave of the future. The book is Understanding Bitcoin.

Q: What music do you listen to when you want to relax? When you want to be inspired?
A: All the classics from the ’60s, ’70s and ’80s. Springsteen. Dylan. Simon and Garfunkel. The Rolling Stones. Music plays a huge part in my life; we have it on all the time. Music is a mood-changer. You get the right music at the right time and it’s fantastic. For inspiration, it’s Sympathy for the Devil. I get cranked up. There are some classics that are timeless.

Q: Have you had mentors in your life? Individuals who have inspired your life decisions?
A: Bill Price has been incredibly special to me. I used to work for him and he was a fantastic leader and inspiring manager. He allowed me to open my wings. We started working together 30 years ago, but we’ve remained best friends. I’ve been incredibly fortunate to have a mentor like him. Also, in Sweden, Jack Grafstrom, who like me retired from business and became an artist. It was like “Maybe Jack is showing me the way here.”

Q: If your life story were to be made into a movie, who would play you?
A: I really like what I’ve seen of Benedict Cumberbatch. He played Sherlock Holmes, and that’s a passion of mine. My dad used to read him to me when I was a little boy. And Cumberbatch played him really well.
Q: Who/what makes you laugh?
A: My son James, my wife, my dog. Maybe I’m overreacting to the lockdown time, but being with friends, laughing, sharing a good bottle of wine, that makes me laugh and makes me happy.
Also, the original Tom and Jerry cartoons. I used to take the JetBlue flight from New York to Palm Beach and at 11 a.m. there would be an hour of Tom and Jerry cartoons, and people would look at me because I was laughing so hard.