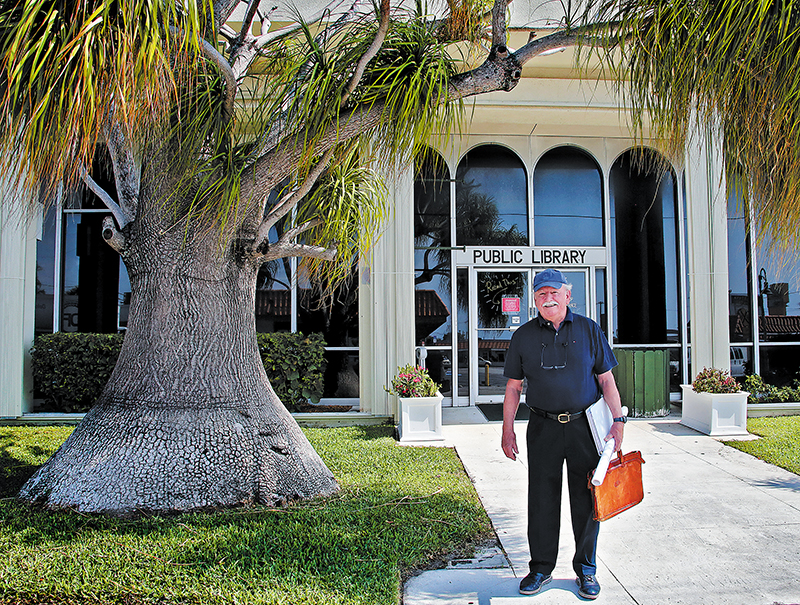 Robert Barfknecht, chairman of the Lantana Library Foundation, is as much a part of the library as is the ponytail palm outside. Tim Stepien/The Coastal Star

It was no surprise some years back when Hypoluxo Island resident Robert Barfknecht, a voracious reader, became a dues-paying member of the Lantana Library Foundation.

Then, about 10 years ago, he became even more.

“I made the mistake of giving them too much money one year and they immediately invited me to become a member of the foundation’s board of directors,” Barfknecht recalled with a laugh. “I accepted delightfully. I like giving back to the communities where I’ve lived and prospered.”

Sanford “Sandy” Beach was the foundation director at the time “and he was very, very passionate about the library,” Barfknecht said. “Later Sandy left, and I was got elected chairman of the foundation.”

Located for the past 25 years in an old bank building on Ocean Avenue just west of the railroad tracks, the library is not in the county system but is maintained and supported by the town of Lantana.

“Sid Patchett, the director for so many years, worked hard to make it different, through the quality of the literature that was to be found there,” Barfknecht said.

But now he and his board have a much larger assignment.

The 1-cent sales tax increase levied by Palm Beach County a few years ago has allowed Lantana to improve some public utilities and, according to Barfknecht, much of the money for a significant upgrade in the library is in this year’s budget.

“What we have in that plan are some wonderful spaces for children, special places for teens, a teen creation lab, and also a community center for adult activities. That’s something that’s missing here,” Barfknecht said. “It’s going to enrich our community and bring us forward for the next decades.”

The plan was approved by the Town Council at its May 11 meeting. Barfknecht was praised for his dedication to the effort.
As it happens, the meeting coincided with Barfknect’s 82nd birthday, “and I can’t imagine a better birthday present. Our community needs it and will prosper with it.”

A: I grew up in the city of Detroit when it was the industrial center of the world. I went to school and university there, earning a B.S. in mechanical engineering and an M.S. in engineering mechanics at Wayne State University.

It was a great place to work in my chosen profession as there were producers of every kind of product and their support industries. I worked for a consulting engineering firm started by several of my professors at the university and gained incredible experience across many industries as a young project engineer.

Q: What professional accomplishments are you most proud of?

A: I developed an early pneumatically powered robot that was quite successful. I also obtained my license as a registered professional engineer. I maintain that license in Michigan even today.

After the Detroit riots in 1967, with the burning of large parts of the city, my wife and I began planning our departure. My experience in Detroit convinced me that I could find useful employment anywhere in the world. So, Louise and I decided to go to my mother’s beautiful country of Italy to learn the language and perhaps learn to cook like my grandmother did. Louise suggested that we go to Italy via the Orient.

In August 1969, I resigned my position, we sold our stuff, packed two backpacks and flew west to California, Hawaii and Japan to begin our five-month trip to Florence, Italy, where we had reserved spots in a good language school. Louise published a memoir about all this called Leaving Detroit, which is available on Amazon and at the Lantana and Manalapan libraries.
We had saved enough money to last at least a year while I learned enough Italian to find professional employment. It took longer than I thought. But after a year in the wonderful city of Florence we had made enough friends to find small jobs to augment our savings.

I worked as a carpenter and as a house painter for an American countess who owned a grand villa. These were skills that my father had taught me and that I had used to work my way through college. As we got better with the language we both found work as translators.

A: In Italy, while working to upgrade the former villa stables to a grand apartment, I was introduced to the new renter, an American named Bob Collier, who had arrived to take over an Italian plastics company. We hit it off. After building him some closets and painting the place to his satisfaction, I gave him my bill and enclosed my résumé. I asked him to call me if he ever needed a good engineer.

Two weeks later he called, and that began what became a wonderful 20-year career with Mobil Corp. I was hired first as a consultant to help them purchase three Italian plastic manufacturing plants in northern Italy. Then they hired me to be engineering manager, operations manager and ultimately general manager of various plastics manufacturing businesses in Europe and the United States. This marvelous man became my mentor and helped me launch a great new career.

Q: How did you choose to make your home in Lantana on Hypoluxo Island?

A: During our early years in Italy we returned on a visit to Detroit to find my old neighborhood very depressed and my widowed mother looking for change. Mom had a close cousin who lived in Lantana and we suggested she visit and check out the town. She loved it and bought a condo at the new Croton Harbor, one block away from her cousin.

We visited in 1974 and were smitten by the tropical wonders. On every visit we would barbecue and picnic at the Lantana beach pavilion, which was open to the public in those days. We snorkeled, spear-fished and played lots of pinochle.

We bought our condo apartment across the street from my mother’s place in 1988. We used it as a getaway whenever I could get some time off. I vowed that someday when I retired, we would find a home on Hypoluxo Island. We moved to the island in 2000.
In 1991, I was offered the opportunity to become president and CEO of a wonderful company in Chippewa Falls, Wisconsin, called EDI. We left our home in Tuscany to come to Wisconsin for my new career. We had softened the bitterly cold winters of northern Wisconsin with frequent visits to our condo in Lantana but looked forward to retirement in the tropics.

Q: What is your favorite part about living on Hypoluxo?

A: We are as happy today as we were when we bought it 20 years ago, maybe even more so. We have found good friends here, very interesting people who have worked hard at their professions and who appreciate the tranquility and beauty of this place.
Now in the time of the COVID-19 pandemic, this is as good a place to shelter as I can imagine. We are walking on the island, swimming in the pool, painting watercolors in the garden (me) and writing a memoir of food and friends in Italy (Louise). We don’t watch television but read tons of books. Louise got us both involved with the Lantana library some 15 years ago.

A: I have just started Hilary Mantel’s third book of the Wolf Hall trilogy, called The Mirror & the Light. On the reading table are started but not yet finished, The Anarchy by William Dalrymple, about the British East India Company, and Disunited Nations by geopolitical strategist Peter Zeihan.

A: We have instituted opera night every Friday during the pandemic. We will prepare a special dinner and follow it with an opera film. This started when our last opera of the Palm Beach Opera season, Eugene Onegin, was canceled due to the virus. I bought a copy of an old (1958) Russian film of the opera and we started with a 7:30 curtain time that Friday evening. This was so much fun that we started doing our own Friday night at the opera.

Q: Is there something people don’t know about you but should?

A: I have a show of my watercolor paintings hanging in the Manalapan Library and I have been honored with commissions for paintings that hang both in the library and in the new Manalapan Council Chambers.