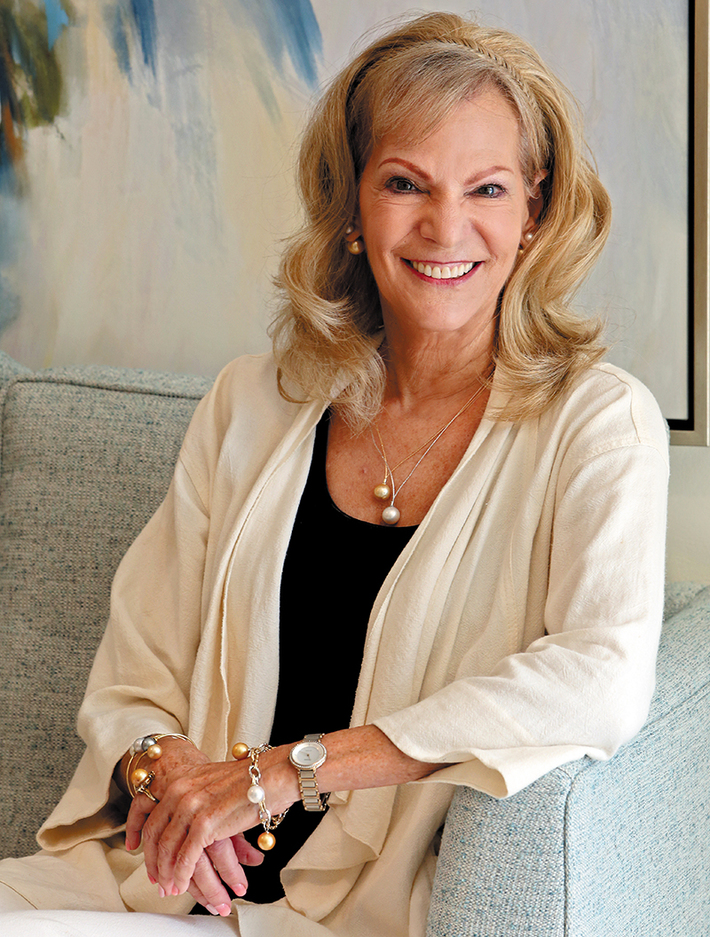 Paulette Dale wasn’t planning to tell the president of the United States he had a great smile — not in person and certainly not on national television with 14 million people watching.
But that’s exactly what the retired former Miami Dade College professor did during an October town hall meeting with President Donald Trump, which aired live on NBC.
“It was my honest reaction,” said Dale, whose compliment heard around the world quickly drew criticism — and praise — and was even parodied on Saturday Night Live.
The last of several people on the broadcast chosen by NBC to address the president, Dale had practiced her question about the Deferred Action for Childhood Arrivals program before heading to Miami for the town hall presentation.
“I simply prepared myself to say, ‘Good evening, Mr. President,’ and follow with my question about his plans for DACA,” said Dale, who lives in Highland Beach.
Then the president smiled at her while waiting for her question and she reacted.
“I thought his smile was warm and welcoming, so I said so — on national television,” Dale said. “Holy smokies. My sincere compliment went viral on social media.”
Within minutes Twitter, Facebook, Instagram and dozens of other social media sites were peppered with comments about Dale and her compliment.
Her words, Dale said, even made the president blush — although you couldn’t really see that on TV.
Among those chiming in to show their chagrin were actress and singer Bette Midler, who suggested that Dale would benefit from better eye care. There was also an altered photo of Dale’s face on the body of someone in a straitjacket.
It was a Saturday Night Live skit, in which Dale was portrayed as somewhat scatterbrained, however, that may have brought most attention to her words.
That portrayal couldn’t be further from the truth.
After earning a doctorate in communication sciences and disorders/linguistics, Dale has taught and mentored hundreds of students who have entered careers as speech therapists. She has also taught thousands of students basic interpersonal communications skills as well as public speaking.
In addition, the 68-year-old professor has spent time working as an English language specialist for the U.S. Department of State, teaching workshops and training educators on how to teach American English to non-native speakers. During school breaks, Dale has traveled to South and Central America and the Philippines on the government’s behalf.
A native New Yorker, who like Trump grew up in Queens, Dale came from a working class family and learned that education would become the key to success. Her involvement in education — and with students who were brought here illegally by their parents — in some ways played a role in her being asked to participate in the town hall with the president.
Her interaction with those students led to her writing the question about the DACA program when she was contacted by Ask Miami, a focus group she had signed up with several years ago, to submit questions for a possible appearance at the town hall session. She had mixed emotions when an NBC representative contacted her and told her she should prepare to ask her question of the president on live television.
“I thought, ‘Oh boy, now I’ve done it,’” she said. “I was excited but also wondered what did I get myself into.”
Despite the criticism of her smile comment, Dale says she was encouraged by people who were happy to see someone compliment a candidate who wouldn’t likely get her vote.
“I would say that the vast majority of individuals realized that the compliment was genuine,” she said.
So would Dale ask a question at a town hall meeting again if the opportunity presented itself?
“Absolutely,” she says. “Certainly not for the attention but to get a very vital message out. The ability to pay the president a sincere compliment and simultaneously disagree with his political and philosophical views should not be mutually exclusive.”
— Rich Pollack

Q. Where did you grow up and go to school? How do you think that has influenced you?
A. I grew up in Queens, New York City. I left New York after graduating from Queens College at the age of 20 to attend the University of South Florida for my M.S. degree in speech pathology — before attending the University of Florida in Gainesville for my doctorate in communication sciences and disorders/linguistics. I’ve lived in Florida for 48 years, 43 of them in Miami. Growing up in New York has prepared me for all of life’s challenges. After all, like Frank Sinatra said, “If you can make it there, you can make it anywhere.”

Q. What professions have you worked in? What professional accomplishments are you most proud of?
A. As a college student, I worked summers as a showroom model in the New York City garment center. Other part-time jobs throughout the years included waitressing, being a receptionist and a switchboard operator. I was a speech pathologist in Broward and Miami-Dade County public schools before becoming the director of the Speech and Hearing Clinic at Miami Dade College. I was a full professor at Miami Dade College for 35 years, teaching courses in public speaking, phonetics, communication disorders, and general speech communication.
I am immensely proud that many of my professional efforts have helped people to live better lives. I am proud that I was able to be a role model for thousands of college students during my teaching career.

Q. How did you choose to make Highland Beach your home? How long have you lived here?
A. I’ve lived in Highland Beach for five years. My son and daughter-in-law moved to Boca about five years ago for a career opportunity. There was absolutely no reason for me to stay in Miami any longer.

Q. What’s your favorite part of living in Highland Beach?
A. The safe environment, low (if any) crime rate, the wealth of services within close proximity — the beach, library, post office, Police Department, fire station — the cleanliness and the physical beauty of the area.

Q. What book are you reading now?
A. I just finished The Tattooist of Auschwitz. Before that The Alice Network, about a ring of female spies for the Allies during World War I.  My favorite genre is historical fiction. I’m currently reading Ken Follett’s latest book, The Evening and the Morning.

Q. What advice do you have for young people today?
A. “Shoot for the moon. Even if you miss, you’ll land among the stars.” If you set your goals high and try to reach them, you will still end up being successful, even if you don’t attain your original goals. If you strive for excellence, you will end up accomplishing so much more than if you just settle for mediocrity.

Q. What do you do in your free time?
A. I’m a strong believer in volunteerism. I am a trained volunteer crisis counselor for the Crisis Text Line. I do individual crisis counseling for teens and adults experiencing suicidal thoughts, anxiety and depression.
I am also a trained volunteer arbitrator for the BBB Auto Line. I arbitrate Florida Lemon Law cases. It’s very interesting and challenging. So far, I have decided in favor of the consumer about 50% of the time, and in favor of the manufacturer approximately 50% of the time.
I’m an avid pickleball player. I love to play canasta and Rummikub with friends. During COVID we play online. I love to FaceTime friends around the world as a way to stay close and in touch with them.

Q. What makes you laugh?
A. Stephen Colbert, John Oliver, Jimmy Kimmel, Saturday Night Live. Except, I didn’t think the SNL skit about me telling the president he had a great smile was funny. Maybe because I was the subject of the parody!

Q. If your life story were made into a movie, who would play you?
A. Sarah Jessica Parker. She is a kind, down-to-earth, generous person. That’s more important to me than having a physical look-alike.