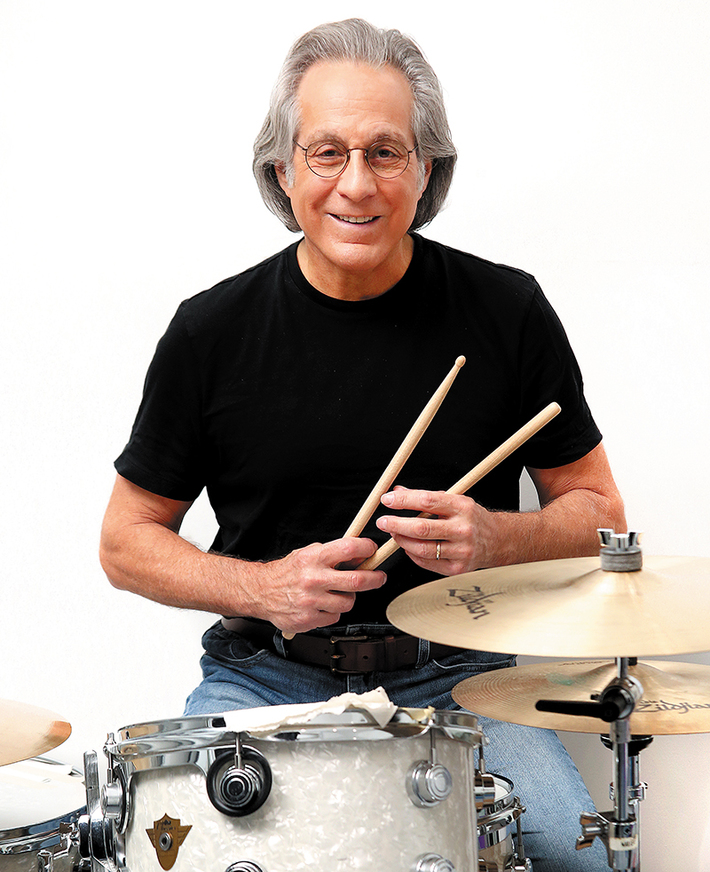 Max Weinberg, drummer for Bruce Springsteen, keeps a drum set in the garage of his Delray Beach home. He joined the city’s Planning and Zoning Board this year to serve his new community. Tim Stepien/The Coastal Star

Max Weinberg has spent much of his adult life splitting time between being the drummer for Bruce Springsteen’s E Street Band and serving as bandleader on Conan O’Brien’s late-night talk show. But through it all, he has retained a keen interest in real estate, architecture and city planning.
So it may not be surprising that, after some urging from friends, Weinberg earlier this year applied for and was appointed to a position on the Planning and Zoning Board of his new hometown, Delray Beach.
“What you try to do as a drummer is keep the conversation going,” Weinberg said. “So as a Planning and Zoning Board member I’m trying to keep the municipal planning conversation going. And it’s tough.”
Weinberg, 69, started drumming when he was 6 and, at 23, was hired by Springsteen after answering an ad in the Village Voice. One of the high points of their association, which continues to this day, came in 1984 with the release of Born in the U.S.A., an album that spawned a record-tying seven Top 10 hit singles and prompted Springsteen to later say, “Max was the best thing on the record.”
In 1993, a chance meeting with O’Brien resulted in Weinberg’s hiring as bandleader on O’Brien’s late-night show. Weinberg put together a band — The Max Weinberg 7 — and that relationship lasted until 2009.
Weinberg moved to Palm Beach in 2015 before heading to Delray Beach in March 2017. His first meeting with the Planning and Zoning Commission was Sept. 21, so he’s still navigating the territory. So far, he’s relying heavily on a 20-year comprehensive plan titled “Always Delray” that came out just last year.
“My interest is to serve the very diverse constituencies who not only are the residents of Delray but who have a vested interest in Delray,” he said. “You have to make sure everybody in the city is being served, and I’m not so sure that’s being done.
“I’m at a time in my life where enough people asked me to get involved that I finally said yes. My professional activities are curtailed, just like everybody else’s,” he said of the coronavirus pandemic, “and I don’t see that changing much during my (two-year) term as a board member. I hope that’s not the case, but I’m not super-optimistic.”
Weinberg, an inductee into the Rock and Roll Hall of Fame as a member of the E Street Band, has been married for 39 years to Becky, a former history teacher. The couple has two children: Ali Weinberg Rogin, a senior producer of foreign affairs for PBS NewsHour in Washington and wife of Washington Post columnist Josh Rogin; and Jay Weinberg, a drummer with the heavy-metal band Slipknot.
Weinberg’s other accomplishments include authoring a book, The Big Beat: Conversations With Rock’s Greatest Drummers, which profiled Ringo Starr, Levon Helm and others; graduating from Seton Hall University at age 38 after a lengthy hiatus due to his band work, and being honored by Big Brothers Big Sisters of America for his work with that organization.
— Brian Biggane

Q: Where did you grow up and go to school? How do you think that has influenced you?
A: I was born in 1951 in Newark, N.J. We moved to the suburb of Maplewood, N.J., and then to South Orange, N.J. Maplewood-South Orange shared a school system and it was top notch.
I graduated from Columbia High School in Maplewood in 1969. In high school I played drums in the marching band, the concert band, stage band and orchestra, so my day was filled with music.
The opportunities back in the ’50s and ’60s for playing music locally abounded and gave me a chance to grow as a player. As a consequence, I was already in a band when the Beatles broke big in 1964. My teen band was sort of the local “stars,” if you will.

Q: What advice do you have for a young person seeking a career today?
A: Recently, I received an honorary doctorate from Lafayette College in Pennsylvania and was asked to speak a few words to the graduates. They asked for some career advice. Well, any career, especially today, is so tough and likely to change over the course of one’s working life. But I do believe that it helps to be the first one to arrive on the job and the last one to leave. You’re probably not going to love every working moment, but one should gain a sense of reward from that component of life.

Q: How did you choose to make your home in Delray Beach?
A: My wife, Becky, and I have lived in New Jersey, Washington, D.C., and Los Angeles. We chose to live in Delray Beach after several years in another Palm Beach County town for the small-town scale and the extremely friendly and diverse population that comprise the city.
As a newly appointed Planning and Zoning Board member I hope to be able to make a difference in helping to maintain this unique human scale ambience, preserve the best of what Delray offers, particularly architecturally, and improve the rest for all the constituencies comprising the city.

Q: What book are you reading now?
A: My interests are pretty diverse. Most recently I finished The Age of Eisenhower, as I have felt a need to fill in the blanks of my childhood, particularly the widespread misconception that the 1950s were such a “placid” decade. That period was anything but.
I’d also recommend Freedom’s Forge, which tells the story of FDR and America’s response to the growing dangers of World War II, a conflict for which in 1937 the United States was ill-equipped and unprepared to wage. This book could be a primer for how we need to face our current challenges and those in the future.

Q: What music do you listen to when you want to relax? When you want to be inspired?
A: I listen to Sinatra to relax — what else? What music do I find inspiring? Bruce Springsteen’s new album, Letter to You, is my go-to at the moment. Bruce’s stories are real and uplifting and the E Street Band is my musical North Star. Beethoven works well for me as well — and Pavarotti. I’ll get into a heavy Beatles marathon from time to time — no one’s done rock better except for maybe Chuck Berry.

Q: Have you had mentors in your life? Individuals who have inspired your life decisions?
A: My father, Bert, was a huge influence, as was my mother, Ruth. They had great values — discipline, strong work ethic, willpower, dignified posture — everything a family needed to get through hard times, and there were certainly a few of those.

Q: If your life story were to be made into a movie, who would play you?
A: Paul Newman, of course, but that would have been unlikely. More likely — Harold Ramis or Eugene Levy.

Q: Who/what makes you laugh?
A: I’m a latecomer to Seinfeld but recently we’ve started at episode one and I find it hysterical and so true. Conan O’Brien and Robert Smigel taught me so much about comedy when I was on TV all these years. I still find them both hysterical. Conan: Smart guy, smart humor!

Q: Do you have a favorite cause? If so, why is it so important to you?
A: Save the Chimps in Port St. Lucie is a marvelous sanctuary for these lovely, yet powerful creatures. We support them and also have been longtime patrons of The Gorilla Foundation. I cry when I see the injustices perpetrated on the human species’ closest relatives.
The Golden Rule should be extended to all animals, as it’s heartbreaking to witness the effects of climate change on defenseless creatures, let alone we humans.
Take a look at the iconic photograph Earthrise and embrace the reality that we are killing our unique habitat. One doesn’t need to be an astronaut to marvel at what we’ve been given and are so in danger of losing.
Apart from the preceding I am a strong supporter of preserving our architectural past. Whether public buildings like the destruction of New York City’s Pennsylvania Station between 1963 and 1966 or locally and most recently, the misguided demolition of legendary Sarasota School architect Paul Rudolph’s historically recognized Biggs House on Seabreeze Avenue is distressing to say the least.
I serve on the board of the Delray Beach Preservation Trust and, whether or not one is a fan of a particular architectural style, once they’re gone, they’re gone. And our collective physical history suffers the consequences.