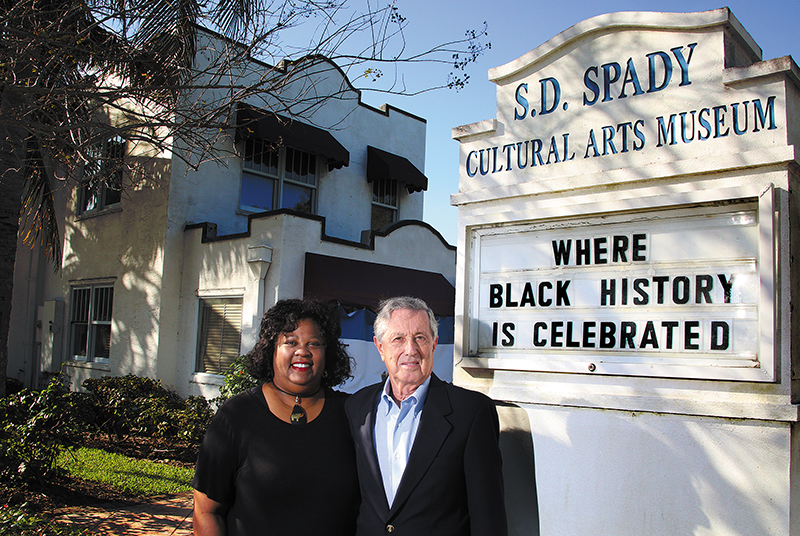 Shortly after Mark Reingold and his wife, Susan, moved to Delray Beach in 1995, Susan attended a lecture by Vera Farrington, a longtime educator and one of the founders of the Spady Cultural Heritage Museum, also in Delray Beach.
“She came home and said it was a very interesting situation and they’ve got some important things they’re going to do,” Reingold recalled. “I had worked as an attorney for some big firms and was looking around and said, ‘This looks like something where I could be helpful.’”
Farrington gave Reingold, 77, a position on the advisory board in 2000, where he remained until last year. The museum honored him with a plaque at its Martin Luther King Jr. celebration breakfast for his 20 years of service.
“I said that day that it was my wife’s fault, she got me into this,” Reingold smiled. “And it’s true.”
Reingold remains an advocate for the museum, which was completed in 2001 and is located in the renovated house of Solomon David Spady, a student of George Washington Carver. The first premise of its mission statement is to “collect, preserve and share relevant black history, artifacts and buildings for the community.”
“People need to understand (the history) of both the black community and the entire community,” Reingold said. “The museum compiles it so people can go back and look at it, so it’s never forgotten.”
Farrington, who spent much of her teaching career at public schools in Delray Beach and Boca Raton, was joined in her efforts to take the museum from idea to completion by Spencer Pompey, after whom Pompey Park is named. Pompey was a civil rights activist, author and teacher who founded the Palm Beach County Teachers Association for black teachers.
The Spady Museum, at 170 NW Fifth Ave., boasts 3,200 items in its collection and hosts more than 100 meetings per year. The next major event on its calendar is the Juneteenth Celebration on June 19.
Resigning his board position (“It’s time for someone else to step in”) has given Reingold more time to fulfill his passion for pickleball. He plays two to three times a week at Pompey Park, the Delray Beach Tennis Center and the community center.

Q: Where did you grow up and go to school? How do you think that has influenced you?
A: I was born in Buffalo, New York, and was raised in a suburb of Buffalo. I went to the local public elementary and high schools. Yes, the winters were cold and snowy, but we walked to school and accepted the weather. I think that helped me to learn to push through issues that arise in life.
After high school, I wasn’t quite mature enough to attend college out of town, so I commuted to the University of Buffalo where I obtained a degree in business administration. During college, I worked summers at a local amusement park and steel mill. By my senior year in college, I had decided that I wanted to become an attorney; so, I matriculated to Albany Law School of Union University, where I obtained a Juris Doctor and wrote for the Law Review. My education taught me how to think logically, and I feel that has helped me tremendously in my life.
When the [Buffalo] Bills obtained their franchise in 1960, my parents were in the first group of season-ticket holders and our family has maintained those seats and attended games ever since. The family was recently awarded a game ball by the Bills in honor of its continuous support. Over the past 60 years every fall, I must admit, I have spent most Sundays watching the games in some venue wherever I was living.

Q: What professions have you worked in? What professional accomplishments are you most proud of?
A: After law school, I practiced law in Rochester, New York, for a few years concentrating on real estate. I then became house counsel for over 20 years for a Fortune 500 company where, among other responsibilities, I handled real estate and managed litigation. I traveled to many states where I set up the legal function for the company and acted as general counsel.
I also did some part-time teaching of business law, paralegal studies and law and banking at Rochester Institute of Technology, American Institute of Banking and Monroe Community College.

Q: What advice do you have for a young person seeking a career today?
A: I have no advice at this point. I am too far removed from the days of starting a career to offer any help.

Q: How did you choose to make your home in coastal Delray Beach?
A: For a number of reasons including my travel schedule and Susan’s health issues at the time, we decided to move out of Rochester in 1995 and try something new. We explored many communities in warm weather areas. We knew Delray because we had made a few visits over the years when my parents vacationed here. We loved the “Village by the Sea” and especially the small-town feel. We sold our home in Rochester and purchased a small condo on Gleason Street on the barrier island.
I took and passed the Florida bar exam and continue to practice law. Susan chose to become involved in volunteer work in the community and was especially interested in working with Ms. Farrington, Mr. Pompey and others on development of the Spady Cultural Heritage Museum.
We did love that quieter version of Delray, and I can remember often drinking coffee and reading the newspaper at a small coffee shop on the ocean that evolved over the years into the Caffe Luna Rosa.

Q: What is your favorite part about living in coastal Delray Beach?
A: Although I do not like the traffic and congestion that has developed over the years, I do enjoy the many choices of restaurants and music venues and just walking around town and the barrier island. I have enjoyed tremendously working on the Spady Cultural Museum board and helping the organization to grow.
I have become a pickleball player over the past six years. I usually play three days a week and take part in tournaments around the state. I find pickleball keeps me in pretty good shape. I joined the Delray Beach Pickleball Club that now has approximately 400 members who play at various indoor and outdoor venues around the area, including the Delray Beach Tennis Center, Pompey Park and the community center next to City Hall. I am proud to say that I have amassed loads of medals playing in tournaments in my age group, including in the State of Florida Senior Games, thanks to some good friends that serve as my partners in these events.

Q: What book are you reading now?
A: I like to read biographies and business-oriented books but do enjoy an occasional novel.  I recently read biographies on Steve Jobs, Paul McCartney and Ben Franklin.

Q: What music do you listen to when you want to relax? When you want to be inspired?
A: I like early rock ’n’ roll. My favorite group growing up was the Everly Brothers and I still listen to their music. Susan and I had the opportunity to meet them on a couple occasions. Ever since I read a magazine article on some long-haired guys and watched them on Ed Sullivan, I have loved to listen to the Beatles. I saw them perform live but couldn’t hear them (because of the screaming) in 1966 in Toronto.

Q: Have you had mentors in your life? Individuals who have inspired your life decisions?
A: My father. He was a small businessman who had a sense of honor in his business dealings and always tried to do what he thought was the right thing. I kind of think like that too.

Q: Who/what makes you laugh?
A: I love Larry David’s humor. My wife, three adult children and four grandchildren all have great and clever senses of humor that I love.