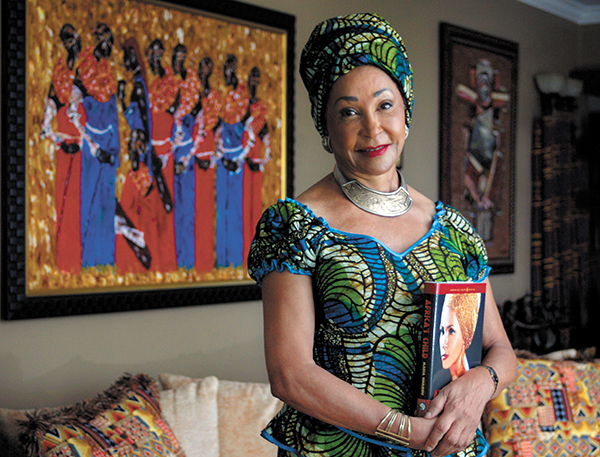 The book is the first of a planned three-part memoir.

Her name is Maria Nhambu but she prefers to be called Nhambu.
It is a name that tells you much about this woman, an orphan in Tanzania who escaped a life void of love and affection and later thrived as an educator in, of all places, Minnesota.
The name also tells you about a role she played during the greatest part of her 73 years, that of informal ambassador helping people in the United States understand more about Africa and those in Africa learn more about America.
Nhambu, in the language of the East African tribe the little girl known for many years only as Mary was born into, translates into one who gets people together.
“My whole life, that’s what I’ve been doing,” she said. “Then many years later, I found out that was my name.”
Nhambu’s extraordinary tale of being left at an orphanage for mixed-raced African children when she was just 3 days old, and of later using education to lead her to an accomplished life in the U.S., is chronicled in her book, Africa’s Child. It is the first and, so far only, published book of a three-part memoir that reads like a script for a Hollywood movie.
Her earliest years were marked by bullying and physical abuse at the hands of older girls in the orphanage, which was in an isolated and desolate mountain region that Nhambu describes as at the end of the world.
“It’s a miracle I’m still alive,” she says.
Thoughtful and insightful even as a child, Nhambu realized that if she were ever going to leave the orphanage she would need an education.
“I was alone in the world,” she says. “I made the decision that nobody wanted me, so I needed to want me.”
As Nhambu got older, the nuns who ran the orphanage sent her to a boarding school 200 miles away, and eventually she was chosen to go to the first secondary school in the area which was run by nuns from the Maryknoll Sisters of New York.
There she met a 23-year-old English teacher named Catherine, who took her under her wing. After her year volunteering in Africa, the teacher headed back to Minnesota — and brought Nhambu with her.
“I was petrified, but I trusted her,” Nhambu says. “You realize you’re leaving the only place on Earth that you know.”
For a few years Nhambu lived with Catherine’s family while going to college on a full scholarship and majoring in French.
“It was the happiest time of my life,” Nhambu says.
She landed a job teaching and made a career in education. Eventually, she put down roots in Minnesota, where she got married and started a family. She still has a home there, where she spends summers.
While teaching, Nhambu also started a fitness program, Aerobics With Soul, which ties back to her African roots.
“I used dances I knew as a child and modified them so I could teach Americans,” she said.
Today, Nhambu lives near the ocean in Delray Beach surrounded by her 700-piece collection of African art.
When she’s in the United States, Nhambu says she is an ambassador for Africa, helping Americans understand more about that continent and its culture.
“I talk about what is good about Africa and what it has to offer,” she says.
During trips to Africa, she says, she shares similar stories about America with Africans.
“I stress the similarities,” she says.
— Rich Pollack

Q. Where did you grow up and go to school? How do you think that has influenced you?
A. I grew up in Tanzania, East Africa. It has influenced everything about me — how I think, how I see and interpret the world and life.

Q. What professions have you worked in? What professional accomplishments are you most proud of?
A. I have been a French and Swahili teacher and created Aerobics With Soul, a fitness program using African dance and music.

Q. What advice do you have for a young person selecting a career today?
A. Find your dream. When you find it, don’t follow it, chase it!

Q. How did you choose to make your home in Delray Beach?
A. My former husband moved his business here and I came with him.

Q. What is your favorite part about living in Delray Beach?
A. The beach, the weather, the community and friends I’ve made.

Q. What music do you listen to when you need inspiration? When you want to relax?
A. African music, solo piano and New Age music.

Q. Do you have a favorite quote that inspires your decisions?
A. “It is what it is, but it will become what you make it.”

Q. Have you had mentors in your life? Individuals who have inspired your life decisions?
A. Yes. Teachers in Tanzania and in America. Both my friends and enemies have taught me meaningful and helpful lessons about life.

Q. If your life story were made into a movie, who would you want to play you?
A. Halle Berry.