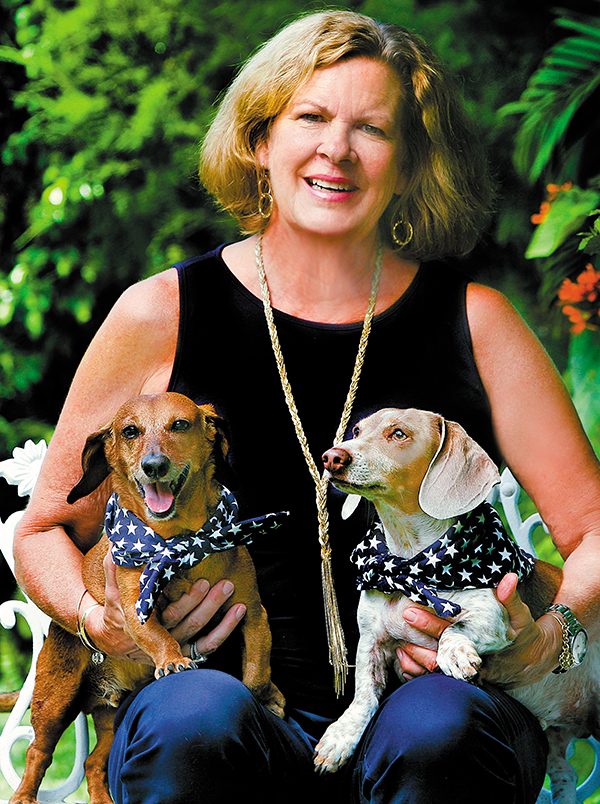 Lyn Tate with her dachshunds Sir Charles, 12, and Duke, 4, outside her Hypoluxo Island home.

Tate is a community activist for the island and the town of Lantana.

Getting Lyn Tate to sit still for even a short time is no easy feat.
With her years in retail (including a stint working closely with legendary lingerie designer Eve Stillman at Saks Fifth Avenue on Worth Avenue in Palm Beach), plus raising two children to adulthood, and her current role as community activist in Hypoluxo Island and Lantana, Tate seems to always live her life in overdrive.
“My husband (Rock) watches old Westerns or sitcoms on TV on weekends and he says to me, ‘Can’t you relax?’ I can relax, but I look around and it’s not going to get done unless somebody does it.
“I’m like Mrs. Kravitz from the old Bewitched show. If anybody needs a question answered they don’t bother calling the town, they just call me. And that’s fine. I know the people to call and I’ve gained their respect. I’ve worked with them for three or four years now so they know who I am.”
Tate, 58, lost her mother at a young age and moved from Port Washington, N.Y., to South Florida with her father when she was 12. A 1980 graduate of Florida State University, she split time between retail positions and being a homemaker until son Rock graduated from college in 2013.
Then Judy Black, former president of the Hypoluxo Island Property Owners Association, pushed her until she joined the HIPOA Board, where she quickly became treasurer.
Since then it’s been one add-on after another: Planning Commission for the town of Lantana, chairwoman of the Lantana Education Council, chairwoman of council member Malcolm Balfour’s election campaign, chairwoman of traffic calming for Hypoluxo Island.
“So it’s funny,” she said with a grin, “I’m just sort of getting real big.”
— Brian Biggane

Q. Where did you grow up and go to school? How has that influenced you?
A. I’m definitely a New Yorker. From Port Washington, N.Y. My mother passed when I was 10, so I had my father and my older brother raising me from that point. My father retired and came to Florida when I was in eighth grade, so I had to retire, too, which is what brought me to Florida.
Because of my superior New York education, I wound up in the advance classes down here.
I put myself financially through college, worked from when I was 16, mostly in retail. I spent 10 years with Saks Fifth Avenue, which was pretty cool. That influenced our family in a big way, because both of our children went North to go to college. So I really believe in having that kind of exposure. I love Lantana and South Florida, but there’s more than that.
But it sort of backfired, because our son opened his business in New Jersey. But we love going back to visit. And Linda, our daughter, was there a long time. She went to Rutgers and stayed three or four years up there after graduation, but now she’s back here.

Q.  What professions have you worked in? What professional accomplishments are you most proud of?
A. In retail I got to know Eve Stillman, a famous designer with whom I worked a lot toward the end of my career, so that was a big deal. Lingerie was big with her. There are other designers, but she liked me a lot and we had a great relationship. That was primarily in the Palm Beach Saks Fifth Avenue. I trained in Bal Harbour, moved to Atlanta, opened a variety of stores, came back to Boca Raton, they transferred me to Palm Beach, and then we decided to raise a family.
In my second profession, motherhood, I’m just proud of the people my kids turned out to be. They’re hardworking people, they give back to society, so I’m proud of that.
In the community part, they call me MacGyver now. I get things done. I’m sort of creative in my approach, and I have zest, and I guess I’m just really proud that I can stand on my own at 58 years old now and say, “Hi, I’m Lyn Tate.” It’s a little more about me right now.

Q.  What advice do you have for a young person selecting a career today?
A. Find your passion. When I went to Florida State I picked a program that had a 100 percent graduation rate and job placement. I got sort of cookie-cuttered in. My husband has been with the same firm for 34 years now. That’s not what it’s about today. We were loyal to our trade. Now you just don’t stay 34 years with a company. You better be passionate about what you do now.
And find something that gives back. My children — Linda is great, she’s a mentor with a program that gives back to athletes, and our son has taken high school kids under his wing and given them internship programs.

Q.  How did you choose to make your home in Hypoluxo Island?
A. My husband and I were renting in Delray and we decided to buy a home. We looked for over a year, and just couldn’t find anything we could afford. So the woman who gave him his college loan to go to Brown University called and said she was selling this house. I came over and looked and said no way. The trees were overgrown. It wasn’t what I wanted.
Two weeks before she left she was going to give it to a Realtor and called and said, “I’m out of here,” and we were exhausted from looking. We came, got a hot dog over at the old Hawaiian, and we looked, and I said, I can’t believe I’m going to buy this old house.
Then I started thinking about the crown molding in the living room, about the character. We had to do a lot of work on it. My father worked like 20 hours a week, we painted it, cleaned everything, tiled everything, carpeted everything. We moved in and I was laying tile on the floor a month before my daughter was born, and I couldn’t get up. I said, “OK, I’m done, you have to finish.”

Q.  What do you like most  about Hypoluxo Island?
A. I was taking a bike ride today and helped a blue crab across the street. That’s what I like. The butterflies, the birds, the blue crabs. We used to have red foxes, and still have one come by every now and then. But it’s really the nature. It’s so beautiful. We feel like we’re on our own little island.
And as far as safety goes, we’ve really educated people on the island that if they see something, say something. We have a camera at the entrance and exit of the island, so that’s good, but the people have really become aware that we need to look out for each other.

Q.  What book are you reading now?
A. See Me, by Nicholas Sparks. He’s amazing. I’ve read every one of his books.
Q.  What music do you listen to when you need inspiration? When you want to relax?
A. I have everything from the Monkees to Frank Sinatra, and I have the same music for stress relief or to relax. Whatever it is, it’s my go-to. And if ’70s music comes on we start dancing, my husband and I. Typically, though, other than the morning news, I try to listen to the noise of the island. I’d rather listen to the birds and whatever.

Q.  Do you have a favorite quote that inspires your decisions?
A. “Life isn’t about waiting for the storm to pass, it’s about learning how to dance in the rain.” (Anonymous) That’s really my mantra. I was probably always like that because of different times in my life when it wasn’t so easy.

Q.  Have you had mentors in your life? Individuals who inspired your life decisions?
A. With my mother passing when I was young, definitely my brother, Andy, and my father, Andrew. Also my husband. My father taught me everything, which is why they call me MacGyver, because I can fix anything. My brother never let me say no. He was like, “You will go to college, you will get a job.”

Q.  If your life story was made into a movie, who would you want to play you?
A. Helen Mirren. She’s a timeless, ageless beauty who’s smart, witty and strong.