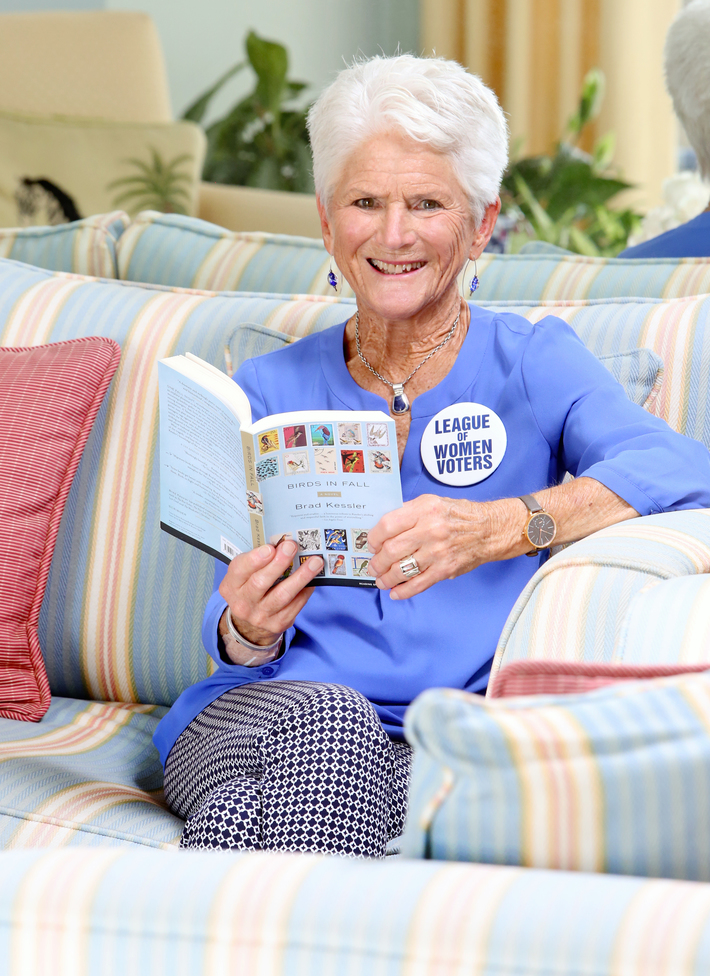 Linda Sorenson, an Ocean Ridge resident for 14 years, is a strong supporter of the League of Women Voters and the role it plays in informing the public. Tim Stepien/The Coastal Star

Linda Sorenson, a member of the Palm Beach County chapter of the League of Women Voters since she moved to Ocean Ridge 14 years ago, says people often misunderstand the organization as politically partisan.
“The league does not support any candidate or political party,” said Sorenson, 81. “It’s strictly an issues organization. But when you’re an organization that considers itself supporting good government, it tends to be government issues.
“It’s very difficult, especially in this climate with our polarization, to keep the nonpartisan reputation — which we work very hard at keeping.”
A native of Albany, New York, Sorenson was a member of the board of directors in the league chapter in the Capital District. She has taken on a lower profile since coming to South County, though she did vet questions at a candidate forum in Ocean Ridge ahead of the March 9 election.
“We do take positions on bills, both on the state and national levels, and often when we study an issue we can form coalitions with groups such as the AARP or the ACLU to have a stronger voice,” she said.
Sorenson said people new to the area should consider joining the league as a means of learning about the “political aspects” of their new surroundings.
“And it’s a great way to meet people, like-minded people,” she said.
An annual membership is $60 for one person and $90 for a household. Membership information is available online at https://lwvpbc.org.
The Palm Beach County chapter has nearly 700 members, making it the largest in the country as of January, and Sorenson said it is among the most active as well.
“We have a lot of young people, and quite a few men,” Sorenson said. “It’s open to men; they just don’t want to change the name because of the name recognition. It’s been established for more than 100 years.”
Sorenson enjoys walks on the beach, swimming and travel. With children in Seattle, Utah and Boston, she has spent recent summers driving to see and spend time with all three.
“Some people don’t like to drive, but I love the freedom,” she said. “I’m not sure I’ll make it out West anymore, but going up and down the East Coast is a piece of cake.”
— Brian Biggane

Q: Where did you grow up and go to school? How do you think that has influenced you?
A: I grew up in Albany, New York, and attended a girls Episcopal school for 12 years. The most influential part of my teenage years was meeting and falling in love with the boy who became my husband (Edward Sorenson) six years later. He was the most intelligent person I have ever known and expanded my horizons. I attended Connecticut College and we were married while in college.
I had some very influential professors who taught me to think and enabled me to explore interests I didn’t know I had. I majored in zoology.
Q: What professions have you worked in? What professional accomplishments are you most proud of?
A: My professional history is the four years I worked while my husband attended medical school. My field was pharmaceutical research for a division of Sterling Drug. I did animal studies on parasitic diseases and also contraceptive drug research. Once my three children started school, I took over the management of my husband’s psychiatric practice office.
My achievements and fulfillments have come through other areas of life and I’ve been fortunate to be able to pursue my many interests. Raising three now very accomplished and caring human beings is the legacy of which I’m proudest.
Q: What advice do you have for a young person seeking a career today?
A: My advice would be to get a well-rounded, liberal arts education in order to be exposed to the many options available. There is time to specialize when he or she learns what excites and motivates them.

Q: How did you choose to make your home in Ocean Ridge?
A: My grandparents retired to Delray Beach in 1945 from Rochester, New York, and my parents retired to Delray Beach in 1964, so I am the third generation to have a home in this area. After my husband died 15 years ago, I decided I could be happier here for the next chapter of my life than in the cold, snowy Northeast. It was our dream to live on the ocean and I am living out that dream in Ocean Ridge.

Q: What is your favorite part about living in Ocean Ridge?
A: I value the opportunity to see the ocean always and be outside every day. I was a runner for 40 years, but now alternate swimming and walking, an important part of my daily life. Ocean Ridge has the feel of a small, well-run, caring community. I participate in our Book Club and Garden Club.

Q: What book are you reading now?
A: I recently finished a memoir, Permission To Fly, by Layng Martine Jr., and am presently engrossed in Birds In Fall, a novel by Brad Kessler.

Q: What music do you listen to when you want to relax? When you want to be inspired?
A: To relax I enjoy all kinds of what I call “mellow folk,” from the ’60s on. To be comforted and inspired, I usually listen to classical music.

Q: Have you had mentors in your life? Individuals who have inspired your life decisions?
A: I have had many mentors in my life, starting with my husband. In my later years, they have been people of faith — pastors, mystics and friends who have inspired me to a deeper relationship with God. I spend time every day in prayer and contemplation. I’m active at St. Joseph’s Episcopal Church in Boynton Beach, where I’m a choir member. My faith propels my activism in charities that support the marginalized of our society, such as CROS Ministries, Caridad Center and Family Promise.

Q: If a movie were to be made about your life, who would play you?
A: I have no desire to have my life made into a movie. If it came to pass, I would suggest Mary Steenburgen, someone I consider not only a great actress but down-to-earth and wholesome.

Q: Who/what makes you laugh?
A: My children and grandchildren make me laugh, and optimistic friends who have a light touch about life and see the good in all.