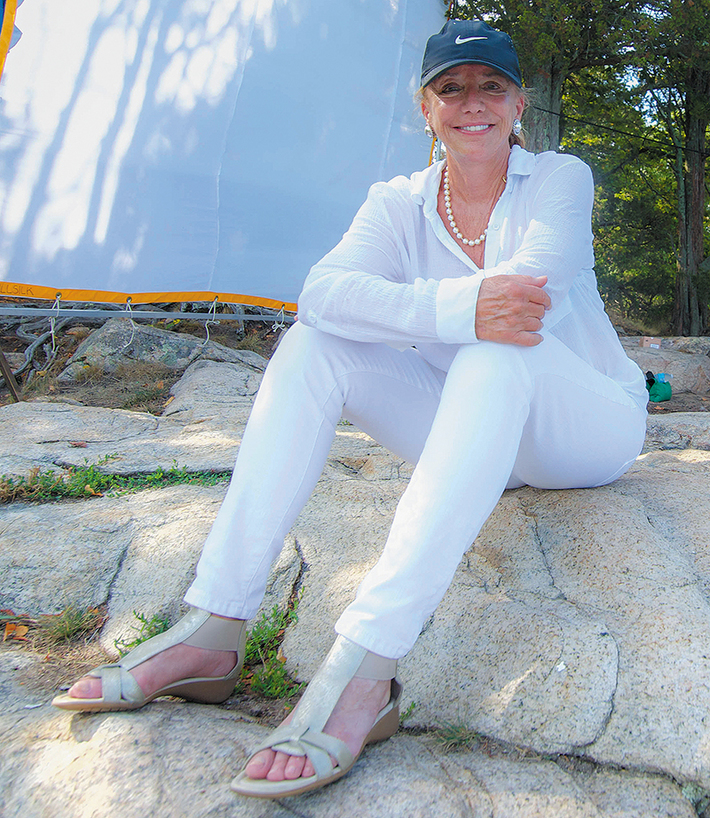 Kristin Alexandre of Gulf Stream wrote a novel, Gem City Gypsy, that led her to produce a story for a movie, Dead Reckoning. Photo provided

When Gulf Stream resident Kristin Alexandre decided to turn her novel Gem City Gypsy into a movie, she had no idea of what she would be up against.

“I found out that no novelist goes out and gets a movie made,” said Alexandre. “It’s just impossible. It’s ridiculous. But I refused to give up … just persevered. But it was so hard.”

The fruits of her labor, titled Dead Reckoning, stars up-and-coming actors K.J. Apa and India Eisley and is available on several streaming websites, including Amazon Prime, YouTube and Vudu.

Alexandre, who has authored several novels, took film writing courses online, worked up a script and then headed to Hollywood to pitch it at the annual Film Festival.

“I learned that it basically was a $30 million project, and nobody was going to trust a newcomer to do it. So I decided to do another script, and had an idea of having a boy and girl fall in love, and the boy is related to terrorists. So that’s when I wrote Dead Reckoning.”

The movie is set in Nantucket, a small island off Cape Cod, and Alexandre’s original title was Altar Rock — an actual location featured in the movie where, as she puts it, “kids like to go to smoke pot and drink and get away from their parents.”

Shout!, the company that bought and distributed the film, “decided they had to change the name because it took so long to make it.”

Alexandre said the complications in getting the film made are similar to those of building a house.

“You’ve got all these parts: the architect, the builder, the landscaper, and it’s a very, very difficult process. … It’s much better to write a book and have somebody buy the rights to your book.”

Alexandre, 72, is married to DeWitt Alexandre and is a member of the New Jersey State Board of the Humane Society of the United States. She works out daily, counts cycling and golf among her interests and is working on a made-for-TV series to be titled Dark Safari.

Q: Where did you grow up and go to school?
A: I grew up in the small suburb of Oakwood, several miles south of Dayton, Ohio. It’s the same suburb where the Wright Brothers lived. I went to the local high school there and first wrote for the school paper, later contributing a weekly column to a local paper there while living in Europe. One of my favorite columns featured my bizarre interview with Ray Charles while I was visiting the French Riviera. He was on drugs and refused to appear before the audience; the people were screaming in protest.

Q: How do you think that has influenced you?
A: Living in Dayton in the ’60s influenced me, as those surrounding me were motivated to do well and move away. There was a sense that jobs and the future were in the East. I wanted to get to New York and make a mark.

Q: What professions have you worked in? What professional accomplishments are you most proud of?
A: I’m very proud to be an Earth Day founder with my former husband. I was the speaker coordinator for this event and worked with Mayor (John) Lindsay’s office, inviting celebrities and authors to come to New York City and share their thoughts. It proved to me that action can bring about change. I learned that the Earth and all creatures are in trouble as a result of man’s impact. Later, I worked as a newscaster in New York City, and for the island of Puerto Rico as a publicist and speechwriter. I continued to write for newspapers and magazines and eventually hosted a talk show that was syndicated and aired on Public Broadcasting.
I’m proud of publishing my first novel and getting involved in film. I’m in the Actors Guild and the Writers Guild and I’ve been involved with producing five films. I wrote, raised the production funds and even helped cast my current film, Dead Reckoning, that just launched on demand and which stars K.J. Apa, India Eisley, Scott Adkins and James Remar.

Q: What advice do you have for a young person seeking a career today?
A: My suggestion is to look around, see whose career makes you envious. That’s the key. When someone is doing something that makes you excited in a jealous way, that’s where you should be.

Q: How did you choose to make your home in Gulf Stream?
A: My husband and I visited the area by boat 20 years ago. We loved the vibe, the way the town of Delray Beach felt and the whole feeling of the area. We bought an apartment first and just loved it.

Q: What is your favorite part about living in Gulf Stream?
A: The people are so friendly and it really is a village.

Q: What book are you reading now?
A: I’m reading Nemesis, by Peter Evans, about the relationship between Jackie O, Aristotle Onassis and Bobby Kennedy.

Q: What music do you listen to when you want to relax?
A: Bruce Springsteen, Bob Dylan. My playlist is mostly from the ’70s so that’s the kind of music I love. Springsteen gets me very worked up. I love him. When I want to be inspired, I listen to the Beatles. Paul McCartney’s music just does it for me.

Q: Have you had mentors in your life? Individuals who have inspired your life decisions?
A: My mother. She believed a person could do anything if they just tried. She was orphaned at 10 but was very driven. She was a terrific mom.
I’m in awe of Jane Goodall and David Attenborough. They are so articulate about the importance of saving our planet and respecting other creatures. We worship God and then destroy all he has given us. It makes no sense whatsoever.

Q: If your life story were to be made into a movie, who would play you?
A: Christine Baranski. I just love her. She’s funny, she’s assertive. … But she has a great sense of humor. She’d be great to play me.