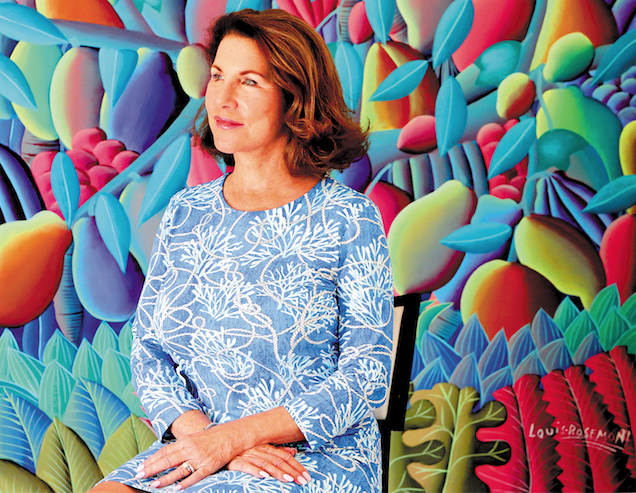 Katie Barr MacDougall of Boca Raton founded HaitianArt.com to buy and sell art. Louis Rosemond’s Tree of Life in Eden Twilight hangs in her living room. MacDougall is semi-retired but calls Haitian art a passion that will last the rest of her life. Tim Stepien/The Coastal Star

A visitor walking into Katie Barr MacDougall’s historic home in Boca Raton’s Riviera neighborhood is immediately surrounded by impressive Haitian art.
Louis Rosemond’s vibrant Tree of Life in Eden Twilight is a focal point in the living room, while Claude Dambreville’s Morning Market is the dining room’s dominant image.
MacDougall’s favorite artist is Henri Rousseau, so it is obvious why the Florida Atlantic University graduate with degrees in art history and computer science is drawn to the colorful, naïve paintings.
“It is my passion,” she said. When she discovered Haitian art, “I made it my quest.”
MacDougall, a city resident since her parents moved to Boca Raton in 1970, opened her first art gallery in the Fifth Avenue Shops plaza in 1989, and later opened another gallery on Delray Beach’s Atlantic Avenue.
Hurricane Wilma in 2005 destroyed that gallery, prompting her to concentrate on her online gallery HaitianArt.com, which she established in 1992.
While she is semi-retired now, MacDougall said she will not give up acquiring and selling artwork.
“It is a labor of love and something I can do for the rest of my life,” she said. “I never intend to retire from Haitian art.”
Although best known for her galleries, MacDougall also has long been active in civic affairs. “If you love where you live, you must be involved,” she said.
She was among about a dozen people who contributed to Al Zucaro’s BocaWatch blog that styled itself as a watchdog scrutinizing the City Council and what many residents perceived as overdevelopment in downtown Boca.
By filing complaints with local and state ethics commissions, Zucaro played a key role in the downfall of former Mayor Susan Haynie, who was removed from office by then-Gov. Rick Scott in 2018 after she was arrested on public corruption charges.
After Zucaro shuttered the blog later that year, many members of his BocaWatch team, including MacDougall, launched the BocaFirst blog to maintain their voice in city affairs.
It remains active, with MacDougall interviewing people involved on matters of public interest. She describes BocaFirst as less political than BocaWatch, focusing on issues residents care about, and said it does not endorse candidates for City Council.
BocaFirst recently wrote extensively about a proposed assisted living facility at 2 SW 12th Ave. Neighborhood residents feared that city approval of the ALF would clear the way for more such facilities to be built in single-family neighborhoods, and strongly lobbied the City Council to reject the project. City staff has determined it should not be approved.
MacDougall filed or joined lawsuits in a battle that began in 2015 against construction of a synagogue and Israel museum at 770 E. Palmetto Park Road that would have been a new home for the Chabad of East Boca. Nearby residents contended the project was too large and tall for the location and would overburden streets with traffic.
In the end, the synagogue and museum were never built.
“It wasn’t the happiest time in my civic activity,” MacDougall said. “People made it into an anti-Semitic thing.”
There was no such animus, she said. Residents did not oppose a synagogue, but objected to such a large-scale development.
“We were suing the city over a questionable zoning change,” she said.
As president of the Riviera Civic Association — which encompasses about 450 homes in the Riviera, Por La Mar and Sun & Surf neighborhoods — MacDougall now is involved in efforts to improve East Palmetto Park Road, especially the section from the Intracoastal Waterway to A1A.
In a presentation to the City Council last year, she cited safety problems caused by the absence of crosswalks, the lack of bicycle lanes, narrow sidewalks that hinder walking and the need to move on-street parking.
Council members subsequently made improvements to the roadway a city priority, but no changes have been made yet. One complication is that stretch of road is controlled by Palm Beach County, so the city can’t act on its own.
MacDougall said the civic association is keeping up the pressure and is in talks with the county as well. Members also are involved in a related push to improve Palmetto Park Road from Federal Highway to Fifth Avenue.
Of all these efforts, her galleries are closest to her heart.
“It has been really, really rewarding,” she said. “I have seen money going into the hands of artists. I feel good about it.”

Q. Where did you grow up and go to school? How do you think that has influenced you?
A. Early childhood education was in Brooklyn, New York, Palm Beach Community College and Florida Atlantic University. Areas of study, art history and computer science.

Q. What professions have you worked in? What professional accomplishments are you most proud of?
A. During my FAU days, I worked at the Wildflower, later at C.O.R.E. International, a computer hard drive company. I also spent many happy years managing Gay’s Perfumery in Royal Palm Plaza. In 1989 my [now deceased] husband, Tony Barr, and I opened the Haitian Art Collection in Boca’s Fifth Avenue Plaza. That site is now a Panera Bread.
My work with the Haitian artists has been the most rewarding aspect of my career — the clients were an added bonus. It’s a little-known fact that collectors of Haitian art are some of the most interesting people in the world.

Q. What advice do you have for a young person selecting a career today?
A. It can’t be all about you: Your career has to be one that impacts others in a positive way. Keeping that thought front and center will help you do great things.

Q. How did you choose to make your home in Boca Raton?
A. My parents moved the family to Boca’s Golden Triangle in 1970. I’ve chosen to remain in Boca Raton because this town feels like family to me. Sometimes dysfunctional but lots of love.

Q. What is your favorite part about living in Boca Raton?
A. Besides the people, I would have to say being close to the ocean and seaside amenities, golf, biking, boating, etc. — plus having great restaurants and entertainment close by.

Q. What book are you reading now?
A. Malcolm Gladwell’s Talking to Strangers.

Q. What music do you listen to when you need inspiration? When you want to relax?
A. Inspiration and relaxation, I’ll listen to chill-out music, something like the Café del Mar collection. For fun, it has to be Talking Heads, Tom Petty or Snow Patrol.

Q. Do you have a favorite quote that inspires your decisions?
A. “Take the risk of thinking for yourself. Much more happiness, truth, beauty and wisdom will come to you that way.” — Christopher Hitchens

Q. Have you had mentors in your life? Individuals who have inspired your life decisions?
A. My art history professor, Kathleen Russo PhD. Her enthusiasm for the subject was like a shot of adrenaline. Also, the supervisor of air traffic control at Port-au-Prince International Airport, Fred Brisson. Fred convinced me to open a Haitian art gallery in Boca.