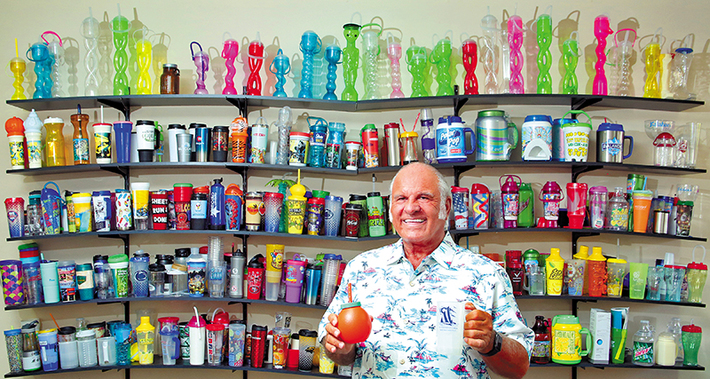 Joe Betras of Hypoluxo Island, pictured in his Lantana office, holds two cups that helped launch his plastics business 40 years ago: a 14-ounce mug in the shape of an orange and a cup with a sailboat and ‘Daytona Beach, Florida’ printed on the side. Tim Stepien/The Coastal Star

When Joe Betras was a 17-year-old lifeguard in Daytona Beach, he sold suntan lotion, zinc oxide and bathing caps to clients at his beachfront hotel pool.
He also stopped on his way to work each morning to buy two gallons of orange juice, then gave away free cups to those same clients. While he didn’t realize it at the time, that simple gesture was the beginning of what became a spectacularly successful career as an entrepreneur.
Betras, who lives on Hypoluxo Island, would have other jobs over the next several years — bartender, blackjack dealer, nightclub manager and even nightclub owner — but when he reached his late 20s he decided he needed a real career with steady hours, one that would allow him to settle down and raise a family with his wife, Henya.
“I felt like she would be a great mother,” he said.
His search for ideas took him to Disney World in 1977, in its early years. He noticed customers were being served orange juice in a plastic orange, and learned a Houston-based company named Teledyne made the receptacles. He called the company and asked to send him a salesman, and when the salesman showed up he opened his briefcase and pulled out a 14-ounce mug.
“I thought, ‘If I buy that mug I don’t have to fill it, I just have to sell it,’” Betras said. “I ordered 20,000 on the spot, 10,000 with a surfer and 10,000 with a sailboat and the words ‘Daytona Beach’ on the side. They arrived a month later and I started selling them to gift shops.”
Soon after he headed back to Orlando, this time to Sea World, where a buyer named Frank Day ordered 1,000 plastic cups with the venue’s logo with the contingency that Betras had to take them back if they didn’t sell. They did, and soon Day put in another order for 500,000.
And he was off. Broadening his operation to get into the manufacturing and distribution as well, Betras founded Betras Plastics and in 1983 moved to Spartanburg, South Carolina. By 1987, it was listed at No. 249 on INC 500’s list of the fastest-growing companies in the United States.
While not every idea worked out over the ensuing years — during which Joe and Henya moved several times and had four children — Betras had some spectacular successes to offset disappointments. He sold 5 million Spuds MacKenzie cups one year, 7 million Ninja Turtles another and an incredible 22 million when the Pokémon phenomenon hit in the late 1990s.
Betras declined all buyout offers until 2014, when competitor Whirley Industries made an offer that allowed him to cut back his workload. So, what happened? Henya started her own plastic cup marketing business.
“We’re competitors now, so she works out of the house while I work here,” Betras, 74, said in his small office in a strip mall on Federal Highway in Lantana.
The couple’s four children are Carolina, who is chief operating officer of a health-oriented cosmetics company and lives in Amsterdam; Danielle, who works in the business technology department of The New York Times; Joey, a chicken and vegetable farmer near New Paltz, New York; and Michael, who is the technology expert for Henya’s firm.

Q: Where did you grow up and go to school? How do you think that has influenced you?
A: I grew up in Wheeling, West Virginia, went to a Catholic grade school, then moved to Sanford when I was 11. Went to Seminole High School, a public school, and wound up at the University of Chattanooga, the first from my family to go to college.
What influenced me most was learning about people. In high school I had friends that didn’t want anything from me; they were just friends. You didn’t have to worry about somebody taking something from you. I didn’t realize until later that everybody always has an angle: If you were successful, they wanted a part of it, and if they were successful, they would try to mess that up.

Q: What professions have you worked in? What professional accomplishments are you most proud of?
A: I was in retail, selling suntan oil as a lifeguard, I was in the nightclub business, I was the owner of a nightclub, then 43 years ago I wanted to get into the plastics business, and through good and bad I’m still in it.
In 1987 we were named one of the top 500 fastest-growing companies in America, which comprised the INC 500. I was named Entrepreneur of the Year in the state of South Carolina, and we were among the top 100 manufacturing companies, also in South Carolina.
In 1990 during the Gulf War, things were getting tough so we sent a tractor-trailer of drink ware over to Kuwait, and got a letter from Sen. Strom Thurmond in appreciation of that. We also put on a beach music festival four years in a row to benefit the Red Cross, and raised $25,000 each time.

Q: What advice do you have for a young person seeking a career today?
A: Technology. Everywhere you go, everything you do involves it. I wish I knew about this when I was learning things. That’s where everything is headed.

Q: How did you choose to make your home on Hypoluxo Island?
A: We always liked Florida and the water, and when we were living in Dallas we did a trade show in Orlando. We decided to take a drive south to look around and wound up in Boca, got hold of a real estate agent, and he showed us 26 properties, the first of which was on Hypoluxo Island.
It wasn’t what we wanted, but it had what they call the bones, and I knew Henya could transform it so we took it. This was seven years ago so the bridge there was out, so we got an incredible deal on the property. By the time we closed, the bridge was finished and here we are.

Q: What’s your favorite part about living on Hypoluxo Island?
A: My wife still says it every time we come over the bridge: I love living in paradise. With the boats, the docks, it’s great. But getting to know the people on the island and the neighbors are fantastic.

Q: What book are you reading?
A: What I’m reading is Huffington Post, Wall Street Journal, New York Times and Bloomberg. But my favorite book was Who Moved My Cheese? This rat eats cheese all his life, one day he goes to get it and it’s not there. What’s he gonna do? Commit suicide or work it out? That was the message I lived by.

Q: What music do you listen to when you want to relax? When you want to be inspired?
A: Basically, it’s the same, and it’s ’50s and ’60s. It just relaxes me, and when I’m relaxed I can think. All I do on Saturdays and Sundays is lay by the pool and listen to the Drifters, the Platters, Temptations, Four Tops. It relaxes me so much it opens my mind to what I could build, what shape I should pursue. I’m always on the lookout for ideas.

Q: Have you had mentors in your life? Individuals who have inspired your life decisions?
A: Mel Fields, who is the person who gave me my first job as a lifeguard at 17. He had one hotel and then got another and I followed him, and we became like family. He had parking lots in New York and bought hotels on the beach in Daytona. He would guide me on investments, on handling people. He mentored me in business and as it turned out he mentored me on life as well.

Q: If your life story were to be made into a movie, who would play you?
A: Burt Reynolds. He’s projected as kind of a wild guy, but sometimes he was serious, too. I just think he could do a good job portraying me as I came through life.

Q: Who/what makes you laugh?
A: Clean jokes, for one. But mostly it’s people who think they’re better than everybody — to see them and realize what they don’t know. I would never say anything to them, but in my heart and mind I’m going, “If you only knew.”