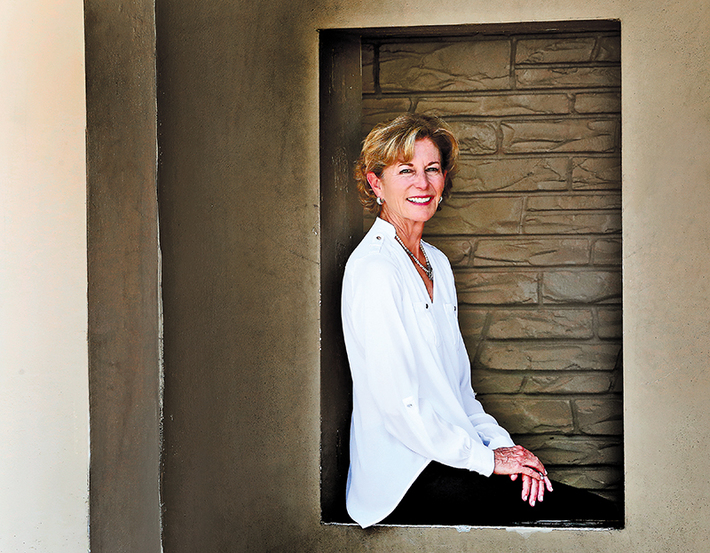 Jayne Malfitano has been with HomeSafe of Palm Beach County since the 1990s. Its Boca Raton facility houses and supports survivors of child abuse. Tim Stepien/The Coastal Star

From her desire to become a candy striper as a teenager, to earning a degree in sociology, to her long-standing role with HomeSafe of Palm Beach County, Jayne Malfitano of coastal Boca Raton has lived a life of caring for people in need.
Malfitano first became involved with HomeSafe in the early ’90s and served on the board of directors from 2001 to 2007. She was a driving force behind HomeSafe’s establishing group homes in east Boca Raton in 2002.
“My role is just to let people know about HomeSafe, and that I believe it to be a worthwhile place to put your money and put your love,” Malfitano said.
Recent contributions have included $5 million from the Stoops Family Foundation and $1 million from the Bernstein Family Foundation.
Launched in 1979 as the Council on Child Abuse and Neglect of Palm Beach County Inc., the program soon became known as Connor’s Nursery in West Palm Beach, where families and babies with HIV issues would receive treatment. It became HomeSafe in 2011.
“We had volunteers who would come and hold the babies, and adults would get the drugs they needed,” Malfitano said. “But after the HIV drugs addressed that issue, it became more of a place where children who were sexually abused or had other needs would come.”
Soon it became apparent that one failure of the foster care system involved those children who were badly damaged and placed in facilities where they were being locked away from the rest of society.
“HomeSafe gets these children very specific, individual therapeutic care,” Malfitano said. “There’s nothing else near us that provides this.”
As part of its Healthy Beginnings program, HomeSafe also has volunteers serve as hospital liaisons who meet with the parents of newborns in Palm Beach County. The goal is to address parents’ needs and put the children on a path to being ready to start kindergarten at 5 years old.
HomeSafe works with the Department of Children and Family Services as well as the court system and even individual families to find candidates for its programs.
“Some come from families who don’t know what to do next with this child,” Malfitano said. “They bring them to HomeSafe, and the people who work there — loving, compassionate, caring people, because it’s not an easy job — work with them and some have been able to go home.”
HomeSafe has several facilities throughout Palm Beach County and has helped nearly 1,500 children and families over its 43 years in operation.
“I don’t think this will be a problem that ends soon, so I think we’ll see more homes — some call them shelters — for kids,” Malfitano said.
In addition to her HomeSafe duties, Malfitano is president of the Harcourt M. and Virginia W. Sylvester Foundation, which offers grants to a wide array of charitable and educational outlets.
Malfitano’s husband, Chris, whose career has included jobs in advertising and government, has also launched a nonprofit, Second Chance Initiative, in Boca Raton. It works with women whose histories include drug abuse or prison time. The goal is to teach the women skills they can use to find full-time jobs.
“It’s just another wonderful way of giving back,” Jayne Malfitano said.
The couple enjoy traveling and have two children: Jeff, 35, who recently moved from California to Naples, and Clare, 30, who resides in New York City.

Q: Where did you grow up and go to school? How do you think that has influenced you?
A: I was born in Rochester, New York, went to high school in the suburban town of Pittsford, then on to college at Florida Southern and Nazareth College, which is back in Rochester. Going to a public school was a more diverse experience than a private school would have been, so I got a lot of different thoughts and opinions.
I graduated with a degree in sociology, so I’ve always been on the path of working with and helping people.

Q: What professions have you worked in? What professional accomplishments are you most proud of?
A: I’ve always worked in counseling, but early on didn’t have the educational degree to be a counselor, so I worked as a volunteer. After I got married and raised my two kids I returned to the field and am now the president of the Harcourt M. and Virginia W. Sylvester Foundation, where I am proud of our work with nonprofits. I am also proud of the partnership when I was an active member of the Junior League of Boca Raton with HomeSafe to bring a children’s shelter to Boca Raton. I was guardian ad litem from 1990-95, working with sexually abused children, where I saw children languishing and some of the issues happening in the homes, so HomeSafe and our Boca facility came out of that.

Q: What advice do you have for a young person seeking a career today?
A: My advice is to listen, be open to others’ thoughts, and be kind. You never know when you will meet again. I see so many kids who can’t listen to what other people have to say. You may still not agree, but listen. And also, being kind. If I’m rude to you the first time we meet, you’re going to remember that and have a negative opinion of me going forward.

Q: How did you choose to make your home in coastal Boca Raton?
A: My grandparents and dad moved to Boca Raton in the early ’70s and we would come and visit from when I was young. It has always been a second home to me. I met my husband here, at the Boca Raton Ball of all places, and we moved to New York City but moved back down to the Royal Palm Yacht and Country Club in 1986 and have been there since.

Q: What is your favorite part about living in coastal Boca Raton?
A: My wonderful memories of family and friends that we’ve made over the years. It’s such a giving community. Many of the women I’ve met in Junior League have become very good friends, and it’s because we have such a commitment to all of this. They may be involved in something different, but it’s wonderful that we’re all doing something.

Q: What book are you reading now?
A: The Boys, by Ron Howard and his brother Clint Howard. It’s like an autobiography that I’m reading for my book club. But what I really enjoy reading is murder mysteries. My book club friends all know that.

Q: What music do you listen to when you want to relax? When you want to be inspired?
A: When I relax, I like quiet, but I love the Doobie Brothers, and I’m going to see them this summer up in Syracuse, where my husband is from. Michael McDonald is going to be on their tour so it’s going to be great.

Q: Have you had mentors in your life? Individuals who have inspired your life decisions?
A: Fortunately, I have had many and appreciate them all. There’s so many people who have taught me so many things. Probably the best mentors I’ve had have been the volunteers I’ve worked with. It’s not necessarily people as much as it is moments that teach you what you need to know.

Q: If your life story were to be made into a movie, who would play you?
A: Sandra Bullock, because she has a great sense of humor. You have to have that when you see the sadness all around you. You have to smile and laugh.

Q: Who/what makes you laugh?
A: Just about everything. Laughter is what keeps the joy in your life. I try to find the humor everywhere. When you see the kids smiling and so happy about something like having their own bathroom, after all they’ve been through, that makes me happy. When you see that, you say: Why am I upset over such little things that really don’t matter?