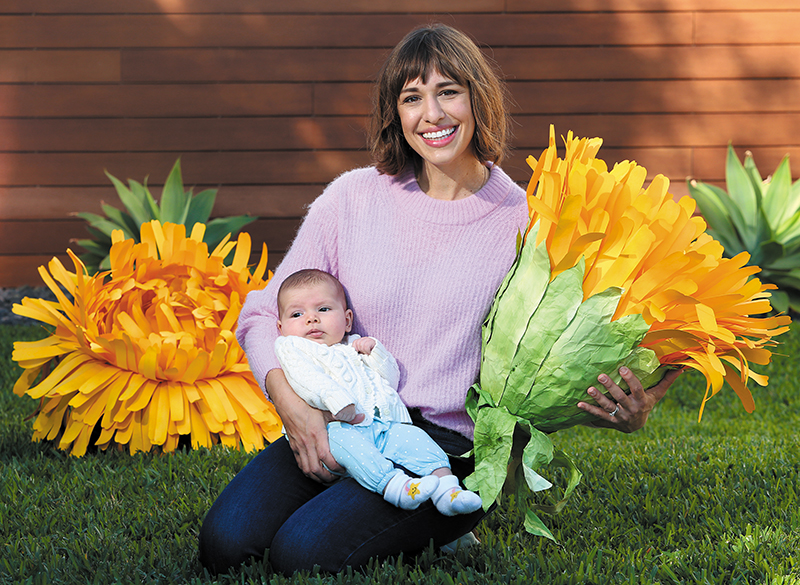 Hayley Sheldon of Hypoluxo Island holds her 3-month-old daughter, Willa, and her papier-mâché dandelions. She crafted the flowers from dyed and painted paper on a papier-mâché base for the show ‘Flora’ last year at the Cornell Art Museum in Delray Beach. Sheldon also does seasonal displays for clients in her work as a prop stylist. Tim Stepien/The Coastal Star

To say that not a lot of people around the country do what Hayley Sheldon is doing is an understatement.

Sheldon, 34, a prop stylist whose work has been featured locally at both the Cornell Art  Museum in Delray Beach and the Norton Museum of Art in West Palm Beach, counts herself among a relative handful across the country in her line of work.

“I know a couple of people on the West Coast who do it, and a friend in North Carolina, but it’s not a lot,” said Sheldon, who lives with husband, Jeff, and their children, Violet, 4, and Willa, who was born Nov. 5, on Hypoluxo Island in Lantana. “We talk to each other about pricing and materials, because there aren’t many of us.”

After receiving her undergraduate degree in fine arts from the University of Central Florida, Sheldon headed to the Tyler School of Art at Temple University in Philadelphia, where she landed a job at the women’s clothing store Anthropologie.

“The company is based in an old building, which intrigued me, because in Florida we don’t have buildings that are 200 years old,” she said. “There was an old art studio in the attic, and there was a whole visual team that would create displays throughout the year. I thought that was cool.”

She had done crafts when she was younger and thought she would like to do that instead of working in the fitting room.

“You have seasonal displays, and they take hours and hours, but you’re not doing personal work, you’re executing a display for someone else, helping create their vision,” she explained. “A lot of artists wouldn’t be OK with that — they prefer to do their own thing — but I really thought it was fun. I liked working with people. It’s such a weird little skill set.”

After nine years with Anthropologie and the birth of her first child, she decided to go out on her own. Her networking in the bustling Palm Beach County art community has kept her busy ever since.

“I really try to think outside the box,” she said. “One time I took thousands of zip ties and arranged them into bundles. And the thing that was cool about it was it was just zip ties. Or making something out of thousands of paper clips. So, there’s a certain ‘wow’ factor with your audience, that you’ve taken something mundane and made it into something more than itself.”

A: I grew up here and attended Lake Worth Christian School. I graduated from the University of Central Florida and then went on to study at the Tyler School of Art at Temple University. I think growing up in Florida has influenced my artwork in terms of the colors that inspire me, being surrounded by such vivid colors in nature all year round.

A: I’ve designed displays and art pieces for an array of places and spaces. From retail window displays to event and gala decor and installations in art museums. I also teach workshops on various art and craft techniques. I had an art installation that was selected to be shown over the course of two years in several art museums in Germany and Switzerland, and still think it’s so cool that so many people, so far away were able to view my work.

A: As a maker there are times you fall into a creative block and can feel stuck. It’s something I still deal with. The best way I know to get through it is just to keep making; even if your heart isn’t fully in it, use it as a time to experiment. Have fun trying a new method or material or create something that will be a gift for someone. I think it’s easier to find motivation when you’re working on something you know will be given to someone else. Think about how much they will appreciate it and let that spur you out of your rut.

Q: How did you choose to live on Hypoluxo Island?

A: I grew up in this neighborhood, so when my husband and I returned to the area it seemed like a good, familiar fit. Especially now with children of our own, we love how quiet and friendly the neighborhood is.

Q: What is your favorite part about living there?

A: I love that you can walk to the beach, or the Intracoastal, McKinley Park, the Lantana Nature Preserve, etc., all within a matter of minutes — especially in the winter on gorgeous days when you just can’t help but want to be outside all day.

A: I’m listening to the audiobook version of A Breath of Snow and Ashes, from the Outlander series by Diana Gabaldon. I like to listen to books while I work, especially during more monotonous projects. It’s a great way to get in the zone and have time pass quickly.

A: For relaxing, standards from the 1940s. For inspiration, something more up-tempo and fun. Lately I’ve been listening to a lot of Sylvan Esso.

A: My parents did a great job of exposing me to the arts when I was younger. We attended plays, ballets, visited museums while traveling. I think being able to absorb that when I was younger gave me the interest and courage to choose a creative career path.

A: Maybe Zooey Deschanel. I admire her quirk and creativity.

Q: Do you have a favorite cause? Why is it important to you?

A: I wouldn’t say it’s a cause, per se, but just a general wanting to foster continued growth in the creative community. There’s so much good going on; I hope I can continue to be a part of it and create more opportunities for artists and art lovers to work and be inspired.