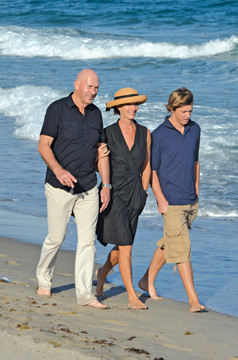 If there’s one character trait that runs through Harold “Sonny” Van Arnem’s life, it’s determination.
As a teenager, he was determined to make the football team even though he’d never played the game. He achieved his goal, playing alongside future football great Roger Staubach and catching the eye of Ohio State coach Woody Hayes.
Then — crash.  The summer before his senior year, Van Arnem severely injured both arms and hands when he was accidentally hurled through a glass door. They told him to forget about playing football. But after at least a dozen surgeries, his gritty determination put him back on the gridiron. He would go on to win a college football scholarship.
Van Arnem says those early challenges shaped him for an entrepreneurial career that had plenty of ups and downs. A pioneer in remote interactive computing and computer leasing, he engineered high-stakes business deals with lucrative payoffs. He developed various businesses and sometimes got burned by his partners. It’s all chronicled in his autobiography (working title: Sonny Side Up), which he plans to publish electronically.
Today, at age 70, he’s busy running Van Arnem Properties Inc. of Delray Beach. His real estate investments include the Town Square office building, Santa Fe Suites and miscellaneous commercial properties in the city’s central business district.
But his true passion is communications technology, a field he knows intimately.
While serving on the Delray Beach Education Board, Van Arnem helped advance the “Digital Divide” project, a city/county/school district initiative to supply needy families with refurbished computers, free Internet access, and training.
“I learned that thousands of families in southwest Delray Beach were surviving on food stamps. The kids had no computers. How could they succeed in school?” Van Arnem said.
He and others worked to get funding commitments to pay for PC refurbishing and wireless routers; the first 10 Delray Beach families have been served under the program as officials continue to seek funding.
Looking back, Van Arnem says his determination may be a genetic trait; he had a strong Irish mother and a hard-working Dutch father. Or, it may have been a gift from the Almighty.
“I think the most important thing is the connection you have with God,” he says.

Q. Where did you grow up and go to school? How do you think that has influenced you?
A. I grew up in Cincinnati, Ohio, and attended Catholic schools from first grade through high school. I got a football scholarship to Xavier University, stayed one year, and transferred to the University of Cincinnati to join their team. I graduated with a degree in economics. My first job was with General Electric. I was recruited for GE’s business training course, which was, and still is, the best training of its kind. That training set the stage for everything I’ve accomplished in business.

Q. Tell us about your career. What were the highlights?
A. I helped launch GE’s computer division in Phoenix, back in the days of mainframe computers, when IBM dominated the industry.
In 1966, GE moved me to Detroit and in 1968 I started my first company called Applied Computer Time Share, which marketed access to GE mainframes via remote terminals. We processed transactions for more than 20 banks in Michigan electronically, long before that was commonplace, and at one point we had more than 100 manufacturing companies outsourcing their data processing to us.
During those years, I helped establish a doctoral program in computer engineering at the University of Detroit.
Later I got involved in cable TV network ownership. That exposed me to the entertainment world, and I produced a number of motion pictures, including Love at First Bite with actor George Hamilton.
I was one of the founders of the North American Soccer League, the first professional soccer league in the U.S., and I owned a team called the Detroit Express, which played at the Silverdome. I also started and ran a number of communications technology companies over the years, including Cybergate, the very first Internet Service Provider in the southeast U.S.

Q. What advice do you have for young entrepreneurs starting out in business today?
A. Make a plan, work your plan, and be committed to it. Find people who buy into the plan and can execute it according to your vision. Be patient. Continue to reinvent your business. Don’t quit.
Q. Tell us about your family.
A. My wife, Bridgette, and I have been married for 25 years. We have three sons together: Sean, who’s a freshman at Atlantic Community High School; Maxwell, a student and semi-pro skateboarder; and Adam, a music student, artist and writer living in Colorado.
I also had four children during my first marriage. Harold Louis IV is a web developer and the founder of Money.net. Heather, the family anchor, is married and living in Beirut, Lebanon. And my oldest daughter, Aleise, works for Prudential Securities in the Midwest.
My second-oldest daughter, Heidi, became a quadriplegic at age 16 after a horrible accident.
She rose above it and became a crusader for people with disabilities. She won numerous honors for her work, including an award from President Clinton. It broke our hearts when Heidi died in her mid-30s.

Q. Have you had mentors in your life? Individuals who have inspired your life decisions?
A. My high school football coach, Jim McCarthy, inspired me by example. In four years of playing for him, he never spoke to me personally. After the final game of my senior year, he calls me down to his office and says, “You know, we’ve never talked, but I want to tell you how much I enjoy you as a person and a player, and I want to see you succeed in life.” The truth was, he was full of love and caring.

Q. Do you have a favorite quote that inspires your decisions?
A. “Never complain, never explain.” [Benjamin Disraeli]

Q. How did you choose to make your home in coastal Delray Beach?
A. In 1990 we relocated our company, Finalco Inc., from Virginia to Boca Raton. Finalco was one of the largest computer and telecom leasing companies in the world, and we took over the 100,000-square-foot building that formerly housed IBM.
My wife and I had always dreamed of living on the ocean, so we bought property in coastal Delray and built on it.

Q. What is your favorite part about living in Delray Beach?
A. The sunrises, the ocean, and the weather.

Q. Who or what makes you laugh?
A. The scary excitement of things makes me laugh — like the first time I ever flew on the Concorde supersonic jet. We were going so fast, the plane started to shake, and it felt like the wings were going to fall off. I burst out laughing because of the exhilaration of it.