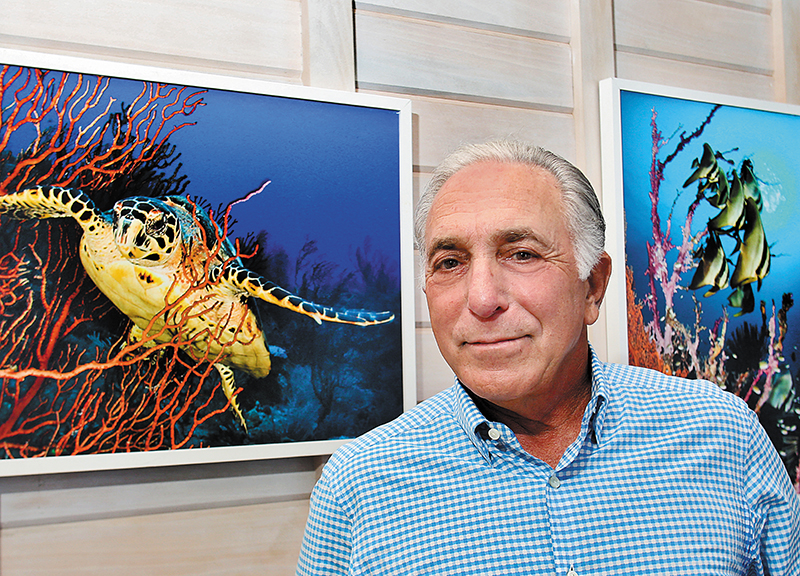 Hal Stern at the Seagate Beach Club, part of the resort his family visited as snowbirds before buying a house in coastal Delray Beach. In retirement Stern is chairman of the city’s Green Implementation Advancement Board. Tim Stepien/The Coastal Star

Hal Stern remains a do-right kind of guy.
His dad was part of the “greatest generation.” As a Jewish man going off to fight Hitler, he didn’t complain about the conditions. “He did it because it was the right thing to do,” said his son.
Stern, who lives in coastal Delray Beach, took that lesson to heart and looks for areas where he can make a difference.
He was a history major at George Washington University during the height of the Vietnam War protests on college campuses.
Stern, 68, remembers the 1971 May Day protests that shut down Washington, D.C. Thousands were arrested and detained near RFK Stadium.
“Washington was a cool place to be,” Stern said. “You could walk right into the Capitol. There weren’t any metal detectors.”
He saw Richard Nixon be inaugurated as president and met Hubert Humphrey and Lyndon B. Johnson.
He also made it to the Woodstock music festival in 1969. “I came from a summer camp in northeastern Pennsylvania and didn’t get stuck in the mud or on a closed highway,” he remembered. “I saw Crosby, Stills, Nash & Young, and The Band. I left when Jimi Hendrix was singing the national anthem. But my ride didn’t show up and I was late getting back to camp. I was fired from my counselor position at 9:15 a.m. because I had missed my breakfast post. Then, I had to call my mom to pick me up. My dad wasn’t mad that I got fired, but he wanted me to have a backup plan.”
A retired lawyer from the D.C. area, Stern brings that passion for action to his role as chairman of the Delray Beach Green Implementation Advancement Board.
The Green Board has had two big successes this year.
One was a milestone in its effort to rid the city of plastic straws.
Florida’s new governor vetoed a bill that would have barred a local government from adopting or enforcing a ban on plastic straws until July 2024. Several cities statewide had passed plastic straw bans.
“These measures have not, as far as I can tell, frustrated any state policy or harmed the state’s interests,” Gov. Ron DeSantis wrote on May 10.
Currently, Delray Beach is educating restaurant servers and others to not offer single-use plastic straws, unless requested. In January, the city will start enforcing the ban.
The Green Board also assessed the city’s tree canopy this year. Stern told the City Commission in April that Delray Beach has an overall canopy of 23 percent. Trees help to combat climate change by providing shade on hot afternoons, helping to slow traffic and cleaning the air by absorbing carbon dioxide while releasing oxygen.
To improve the tree canopy, the Green Board wants to plant 10,000 trees in the city by 2035. Its members will organize planting events and help to strengthen the city’s tree ordinance.
In October, the board plans to have a Climate & Art Festival, drawing together Delray Beach art and education institutions.
“We all should leave this world a little better than we found it,” Stern said, quoting a youth scouting motto.

Q. Where did you grow up and go to school? How do you think that has influenced you?
A. I grew up in the Jackson Heights area of Queens, N.Y. It was just me and my sister and my parents in a two-bedroom apartment — not many secrets when you live so close together.
I was a history major at George Washington University in Washington, D.C. Then, I went to law school at Case Western in Cleveland, but the lure of D.C. called to me.

Q. What professions have you worked in? What professional accomplishments are you most proud of?
A. I was a general litigator in the Washington, D.C., area for about 10 years. We sold that practice and moved into the corporate world in 1988. We helped poor patients who went to the emergency rooms or had surgery find either Medicaid or veterans insurance to cover their bills. I’m proud that we helped many poor people pay for their care.

Q. What advice do you have for a young person selecting a career today?
A. Figure out what you’re good at and then explore until you find a place where your skills fit. Don’t be in such a hurry to choose a career. Take time to explore. A lot of young people today pick finance, but when they start working in that field, they hate it.

Q. How did you choose to make your home in Delray Beach?
A. My in-laws and parents retired to Boynton Beach. We explored the area and found Delray Beach. My kids called me, ‘the mayor of Delray Beach’ because I loved it so much. After I retired, we came down as snowbirds and lived at the Seagate hotel on Atlantic Avenue. We walked the barrier island and eventually picked a street where we wanted to live.

Q. What is your favorite part about living in Delray Beach?
A. What’s not to love? The town has a true sense of place. Just like Washington called to me as a college student, this town calls to me. There are not many beach towns where you can walk down its main street, pass 15 or so restaurants and then end up at the beach.

Q. What book are you reading now?
A. Metropolis, by Philip Kerr. I like it because it’s a historical thriller. Kerr combines the hard-boiled Dashiell Hammett writing style set in the Weimar Republic of Germany.

Q. What music do you listen to when you need inspiration? When you want to relax?
A. Postwar jazz for both. I like listening to tunes by John Coltrane, Dexter Gordon and early Dizzy Gillespie. There’s no talking, it’s all instrumental.

Q. Do you have a favorite quote that inspires your decisions?
A. Theodore Roosevelt’s “The Man in the Arena.” I’d rather get beaten fairly than sit on the sidelines criticizing and not getting things done.

Q. Have you had mentors in your life? Individuals who have inspired your life decisions?
A. I’ve had two. My parents taught me the value of hard work and being honest. The second was a senior partner in a firm I had joined. I had been a general litigator and joined his firm to set up a branch in the Washington, D.C., area. Bernard Landau had a system that helped hospitals collect payments from uninsured patients.

Q. If your life story were made into a movie, who would you want to play you?
A. George Clooney. What man wouldn’t want him to play his life? I like him because of his intensity and he’s not bad to look at. I also think Jimmy Stewart would fit. He was a genuine person, an honest man. I think of his movie Mr. Smith Goes to Washington.