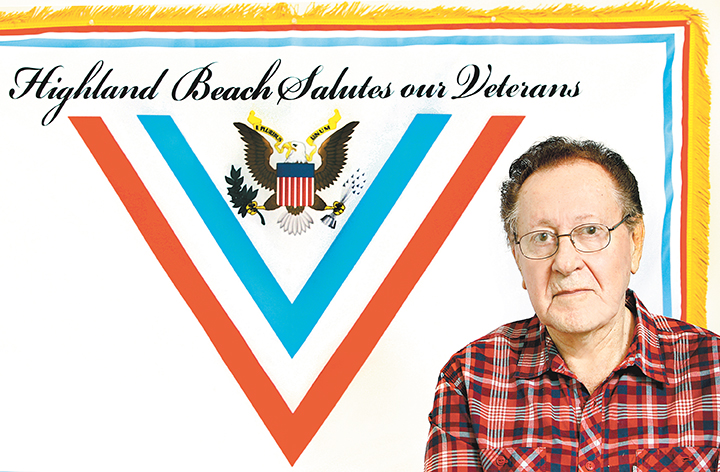 It is the wall in George Kelvin’s Highland Beach home office that provides the best glimpse into the passion and creativity that drove him for more than 40 years and led him to earn an international reputation as a science and medical illustrator.
That wall of the home he shares with his wife, Deanna, is filled with a wide range of framed pieces, ranging from a view of Saturn and its rings to the first-ever illustration of what the AIDS virus looks like.
Though diverse in nature, they share a common denominator: All are the hand-drawn works of Kelvin, who for more than four decades was a go-to illustrator for magazines such as Scientific American, Fortune, Science Digest and Hospital Practice, as well as many other publications. He also illustrated dozens of textbooks, some that are still in use today.
“I always enjoyed the challenge of solving problems,” says Kelvin, 88. “That’s what I do, I’m a problem-solver.”
He recalls the words of a senior editor at Scientific American who once told an art director: “Give the assignment to George, he doesn’t know it can’t be done.”
Having moved to South Florida 18 years ago from Long Island, where he had a full studio in his attic, Kelvin recently took on a new challenge and came up with an idea that reflects his artistic touch.
With the blessing of town commissioners, Kelvin created a flag for Highland Beach that recognizes veterans and their contributions to the country as a whole.
The flag, which reads “Highland Beach Salutes our Veterans” and is red, white and blue with a depiction of the national seal, is displayed prominently in Town Hall in the commission chambers.
“This is my way of recognizing the value and sacrifices of our veterans,” says Kelvin, a veteran himself drafted in 1945 at the tail end of WWII.
The idea for the flag came to him last year on Veterans Day when Kelvin drove past Highland Beach Town Hall and noticed the American flag and a flag honoring prisoners of war and troops missing in action in Vietnam.
“There was no flag representing veterans as a whole,” he said. “It got me thinking and I decided I would design a flag.”
Now working on a computer, instead of with pencil and airbrush, Kelvin created the flag, which he later presented to town leaders.
“I felt that as a community, it’s important for us to recognize the sacrifices of veterans every day, not just on holidays,” said Kelvin, who donated his time and expertise to the project.
It was his military service, Kelvin says, that helped him decide to make a career out of his artistic ability. While in the U.S. Army, he was asked by the division newspaper to do a few cartoon drawings and illustrations.
“That’s when I got serious about art,” he said.
After leaving the service, and armed with the GI Bill, Kelvin honed his skills while at the Pratt Institute in Brooklyn, not far from his home.
His first assignment after graduation was illustrating training manuals for the U.S. Navy. Eventually, he launched a freelance business and landed a job with Time Life, which was doing a series on science and the Earth.
From there, his reputation grew and Kelvin became sought after by art directors and authors alike.
Kelvin is an author himself, having a written a book, Illustrating for Science.  He is also the creator of several fine art pieces, including abstracts using a variety of media.
Still, it was his work with scientists and doctors that helped him get up every morning with a smile, ready to work on illustrations.
“For me, it was like going to college every day of my career,” he said, adding that he was always learning.
— Rich Pollack

Q. Where did you grow up and go to school? How do you think that has influenced you?
A. I grew up in Brooklyn. I went to Pratt Institute and studied art.

Q. What professions have you worked in? What professional accomplishments are you most proud of?
A. I became a scientific and medical illustrator. I worked with Dr. James Watson, the discoverer of the double helix, and illustrated his book. I’m proud of having worked with Dr. Robert Gallo. I did the first illustration of the AIDS virus for Scientific American magazine. I have illustrated many college textbooks — biology, astronomy, physics and chemistry. Helping to explain complex ideas and make them understandable is very rewarding.

Q. What advice do you have for a young person selecting a career today?
A. Pursue something you love and make it your life’s work.

Q. How did you choose to make your home in Highland Beach?
A. We had friends who lived here and loved it.

Q. What is your favorite part about living in Highland Beach?
A. We have the most beautiful main street in America. I have gotten to know our mayor and commissioners on a first-name basis.

Q. What music do you listen to when you need inspiration, when you want to relax?
A. Broadway show tunes.

Q. Do you have a favorite quote that inspires your decisions?
A. “Nothing in the world can take the place of persistence. Talent will not; nothing is more common than unsuccessful men with talent. Genius will not; unrewarded genius is almost a proverb. Education will not; the world is full of educated derelicts. Persistence and determination alone are omnipotent.” — Calvin Coolidge

Q. Have you had mentors in your life? Individuals who have inspired your life decisions?
A. I had an anatomy professor in Pratt, Hoshrov Ajootian. He held up a scapula bone and said “Ain’t nature grand?” There’s no debating that.

Q. Who/what makes you laugh?
A. Seinfeld, Jackie Mason and the Three Stooges.

Q. If you could spend an hour with anyone throughout history, who would it be and why?
A. Leonardo da Vinci. He was pure genius, many years ahead of his time.