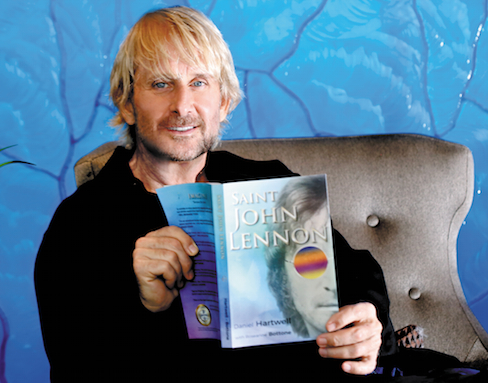 Daniel Hartwell resembles actor Owen Wilson so much that people often stop him to have their photos taken with him. But he’s not Owen Wilson. He’s a concert promoter and author of a book on the Beatles’ John Lennon. Tim Stepien/The Coastal Star

What once may have been taken as a quirky resemblance to a celebrity has turned into a full-fledged cottage industry for Ocean Ridge resident Daniel Hartwell.
For going on 20 years, people have mistaken Hartwell for actor Owen Wilson (Wedding Crashers, Zoolander, Marley & Me), and the notice it’s brought has gone viral since the two were shown in side-by-side photos on Page 6 of The New York Post recently.
“My phone rang off the hook after that,” Hartwell said. “I had no idea what Page 6 was until then. Now People magazine wants me to do a photo shoot with Owen Wilson. I’m waiting to hear more on that.”
A concert promoter who has written a book on John Lennon, Hartwell said he was “shocked” at first by how many people would stop and ask about the resemblance.
“Now I have fun with it,” he said. “Why not? If it’s going to make somebody’s day to have a picture with me, I oblige them.
“It’s really picked up the last five years. I’ve traveled the world and have had people running up and asking for pictures in Japan and Russia and Colombia and all over the U.S.”
The two have never met, but Hartwell said they have conversed through a mutual friend.
Hartwell, 57, promoted a concert through his company, United We Rock, last year in the parking lot near the Fish Depot in Boynton Beach and is working toward putting together “a giant Beatles festival” in Delray Beach in 2019. “The idea is to take over a large part of the city for that,” he said.
While working toward that he keeps busy “promoting my book, Saint John Lennon, along with life coaching, health coaching, business coaching. I also consult for other concert producers and promoters.”
Hartwell is on the board of directors for Horses Healing Hearts (www.horseshealingheartsusa.org). “We provide equestrian therapy for children of alcoholics and addicts,” he said. “Kids in today’s world need all the positive reinforcement they can get.”

Q: Where did you grow up and go to school? How do you think that has influenced you?
A: I grew up in central New England in the Worcester/Boston area. It was a place where you had to be on top of your game and work hard — never a dull moment! The can-do vibe was a great influence because I had to make it without help from anyone. No such thing as luck. Prepare for opportunity is what I was taught.

Q: What professions have you worked in? What professional accomplishments are you most proud of?
A: I have been a drummer, a singer, a producer, a concert promoter and a life coach. Now I am an author, and my greatest accomplishment is the release of my new novel, Saint John Lennon. It’s becoming very popular around the world. The story is a time-travel adventure about John Lennon returning to our near-future world. He continues his mission of promoting peace and love and, of course, creating music. He has missed 40 years of culture, technology, family life and politics.
Fans follow John on his adventures — he appears on Bill Maher’s Real Time, goes into space with Richard Branson, gets around in a driverless car, debates Hannity on Fox News, thwarts terrorism and meets with President Trump. It’s a fun romp fans can’t put down once they start reading. Can you say Beatles reunion? It’s on Amazon and available at saintjohnlennon.com.

Q: What advice do you have for a young person seeking a career today?
A: Life doesn’t happen sitting on the sofa. Get off your butt, get off Netflix and off your iPhone and start meeting people face to face.

Q: How did you choose to make your home in Ocean Ridge?
A: I stumbled upon this wonderful town while visiting a friend and I fell in love with its magical charm.

Q: What is your favorite part about living in Ocean Ridge?
A: The ocean. It’s special here.

Q: What book are you reading now?
A: Love in the Time of Cholera, by Gabriel Garcia Marquez. It’s a great love story that transcends time. Lots of surprises.

Q: What music do you listen to when you need inspiration? When you want to relax?
A: I listen to rock when I am running at the beach, classical when writing and Liquid Mind when relaxing.

Q:  Do you have a favorite quote that inspires your decisions?
A: “It is literally true that you can succeed best and quickest by helping others to succeed.” — Napoleon Hill. I find this quote represents all that I have experienced. When we help others, it truly helps us in all walks of life.

Q: Have you had mentors in your life? Individuals who have inspired your life decisions?
A: Yes, John Lennon, Tony Robbins and my father. John Lennon, and the Beatles of course, were always inspiring with positive, happy songs that filled my life. John’s never-ending crusade for peace was legendary. I have been to some of Tony Robbins’ events and I feel he is a great inspiration to all who experience his mission of growth and positivity. And my father, Douglas Hartwell, who always taught me lessons of goodwill and to always “love each other.”

Q: If your life story were made into a movie, who would play you?
A: Owen Wilson! I get stopped every day and asked if I am him.